When the two Wine Ramblers met in London early in June to celebrate one year of wine rambling, it was obvious that we had to do a blind tasting. Because of our increasing interest in sparkling and English wine the choice of wine was easy: get an English sparkler and a German Sekt and then let's have the two of them slug it out. It would be 1966 all over again, Geoff Hurst facing Helmut Haller. The bottle is round and finishing it takes 90 minutes (or so). So, who will win the 2010 battle of the sparklers? And will it tell us anything about the England vs. Germany match at the 2010 world cup? 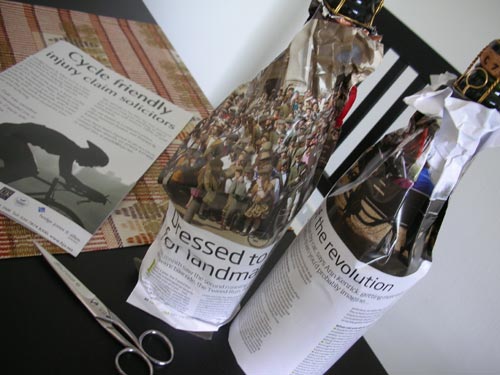 Ladies and gentlemen, welcome to the final of the fizz battle in London's Clapham stadium. We are looking for an interesting game with two contestants that, on paper, should be evenly matched. Their identities will have to be kept a secret until the end of the match, of course, be we can reveal some detail from a well informed source. Both wines were made according to the classic champagne method, including at least two years of maturation on lees. Both are of about the same age (vintages 2005 and 2006) and made from similar grape varietals, mostly Pinot Noir/Meunier and Auxerrois (one of them also had Chardonnay, while the other, we hear, has no Pinot Meunier). The rules for this game are very strict. Neither of the two judges can know which wine is in which bottle. As the London based judge also selected the contestants, this made preparing the game very difficult. To ensure that there would be no bias, the London judge had to wrap both bottles in paper, uncork them, remove caps and corks and leave the kitchen. Following this procedure, the Munich judge had to enter the kitchen, number the wrapped bottles and pour the wine. These methodical Germans, they leave nothing to chance, ladies and gentlemen. Using this procedure the judges could ensure that as soon as the tasting started both wines would only be known as #1 and #2 to them. 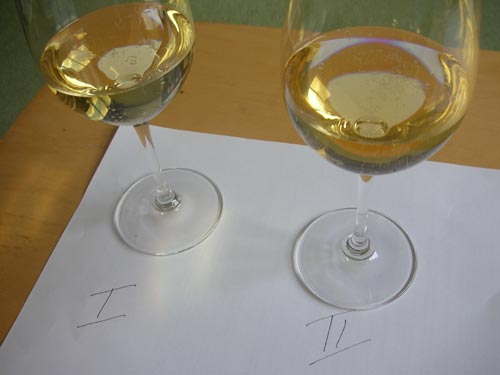 Hear now, the referees have given the signal for kick off. #1 picks up the ball with its great shiny golden colour and many fine bubbles, but what is this? A counter attack from #2! The colour is even more intense, a wonderful gold, and the bubbles, the bubbles ladies and gentlemen! Just two minutes into the game and #2 has already established an advantage. What a great golden colour! While we got a little excited about the colour, the game has moved on. #1 is on the offensive, showing off a wonderfully fruity nose. Apple has the ball, passes on the pear - such very ripe pear, an expert player in this game -, pear keeps the ball, some great dribbling here, and now passes on to peach. The fans go crazy, peach plays this in a very clear fruity style that is just a pleasure to watch - and here comes a hint of petrol. Oh my god, this is almost Riesling in style - a risky decision by the coach in a champagne style game? Ah, but here it comes, floral first, but now the attack moves on to a creamy game of fruit flan. Pear presses its advantages and, and scores. Goal, goal for #1, and played in such a fruity white wine style. The fans go crazy. Now the ball is with #2. A few slow passes first, but we can already see a game plan evolving. A much riper style of attack, almost oxidised. Dust has the ball now, passes on to honey, back to musk - who is playing a very wet-musky-clothes style game now. Apple has the ball now, passes on to apple cider, great acidity whiff here, and goal, goal! #2 has levelled the score.

The ball is back in the game, but ripe pear comes up again, steals the ball from #1, pear passed back to cider - what a fermented style, ladies and gentlemen, and, and, cider shoots again, from an enormous distance. Goooaal! What an interesting style of play, ladies and gentlemen. While #1 plays it clean and fruity, a very easy to like game, inviting, good to watch from home, #2 has taken the lead with a more fuller, complex, interesting nose. We will see if that continues in the second half. And here we are back, ladies and gentlemen. #1 has the ball, again a really fresh and fruity style. Ripe pear taking the lead, some dribbling here, a creamy pass to apricot, who passes on to stone fruit - seems they are trying a sweet attack vector here. Goal, goal, ladies and gentlemen! And here #1 comes again: Stone fruit passes to exotic fruit. The ball is still in the game, a very wine-y style here from #1, now come the creamy notes. Lychee has the ball now, storms ahead, and what a fresh and smooth lychee finish. It is 3:2 at this point with another goal by #1. But here it comes, the #2 counter attack. Yeasty, a more robust set-up of attack players. Drier, dustier, muskier. Clearly, the coach continues the champagne style attack, and here comes over-baked fruit flan, dribbles around the defenders and scores! Effortlessly, #2 equals. And takes the ball again. A more fermented game from #2, baked fruit and yeast, all leading to a creamy yet dusty finish with a good zing - #2 scores yet again. What a game, ladies and gentlemen. They will have to go to extra time to resolve this. 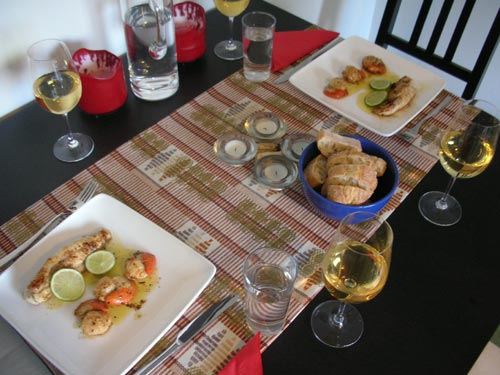 #2 in the lead, we are playing extra time with food. Monkfish and scallops, fried in a spicy lime butter with ginger. Oh, ladies and gentlemen, it seems the players have changed their tactics. #1 a little drier, the fruit less noticeable; how will #2 react? Already in the lead, #2 can play this safe. But here, more freshness from #2, the acidity really comes into play, what a complex style, how versatile, and... 'Some people are on the pitch. They think it's all over... It is now!' 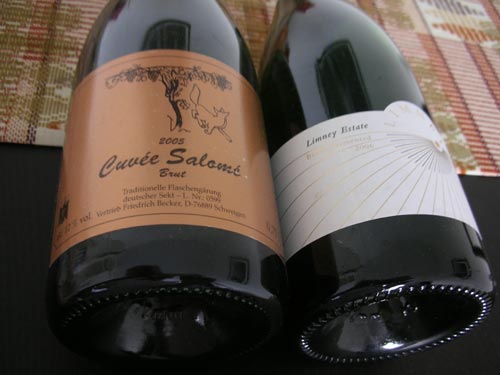 What a match, ladies and gentlemen. We have seen two really good teams, with the Germans playing a clear, clean and fruity style that was very inviting and just a pleasure to drink, whereas England took this one with more complexity. What a match!

Fantastic! I hope though it'll be the antithesis to the game this afternoon! Go Germany! signed: Alex "Haller" (nothing to do with Helmut though ;))

Thanks, Alex! The Wine

Thanks, Alex! The Wine Rambler will of course observe the strictest neutrality as to this afternoon's outcome

In reply to Thanks, Alex! The Wine by Julian

Anyway, it seems our little Sekt v Sparkle prediction was not quite accurate. But it was fun!

In reply to Neutrality by torsten

You got that uncannily right...

In reply to Only too true by Julian

I needed a few years to