How do you get a semi-retired wine blogger to grab his tasting glass and head out into the fray again? Make him an offer he can't resist. Include in it: World class red wines, back vintages no longer available anywhere else, an Italian region that he loves, but still knows too little about. To clinch the deal, promise him that he will get to meet a real live Italian nobleman.

Marchese Lamberto de' Frescobaldi is just that, and he is also the director of his family's vast agricultural and wine growing operation. To promote his high-end Tuscan sangiovese, Frescobaldi and their German importer had set up a spectacular vertical tasting in Munich. Read on for my impressions of 30 years of Sangiovese, and a bit with a wild boar.

As far as the historical record can tell, the Frescobaldi family first settled in Tuscany around the year 1000, moved into the ruling group of Florence city and assembled a vast sprawling dominion in land and trade. Not least in wine. Of the five separate Tuscan estates now gathered under the roof of the Frescobaldi company, two were featured in separate vertical flights: The Castello di Nippozano in the Rufina subregion of Chianti, and Castelgiocondo, a Brunello di Montalcino producer. While traditional Chiantis are medium-bodied, mouthwatering reds ranging from elegant to austere, Brunellos come from the same Sangiovese grape, but are fuller-bodied, with darker fruit and a structure so serious that appellation rules require five years of ageing, at least two of them in oak. An icon of Italian winemaking tradition, Brunellos have traditionally battled it out for best red of the nation with the Barolos of Piemonte, at least until a breed of modernised crossover wines called Super Tuscans came along and swept to short-lived fame. If all this is Tuscan wines 101, then, frankly, it also pretty much sums up the background knowledge I brought to the afternoon. 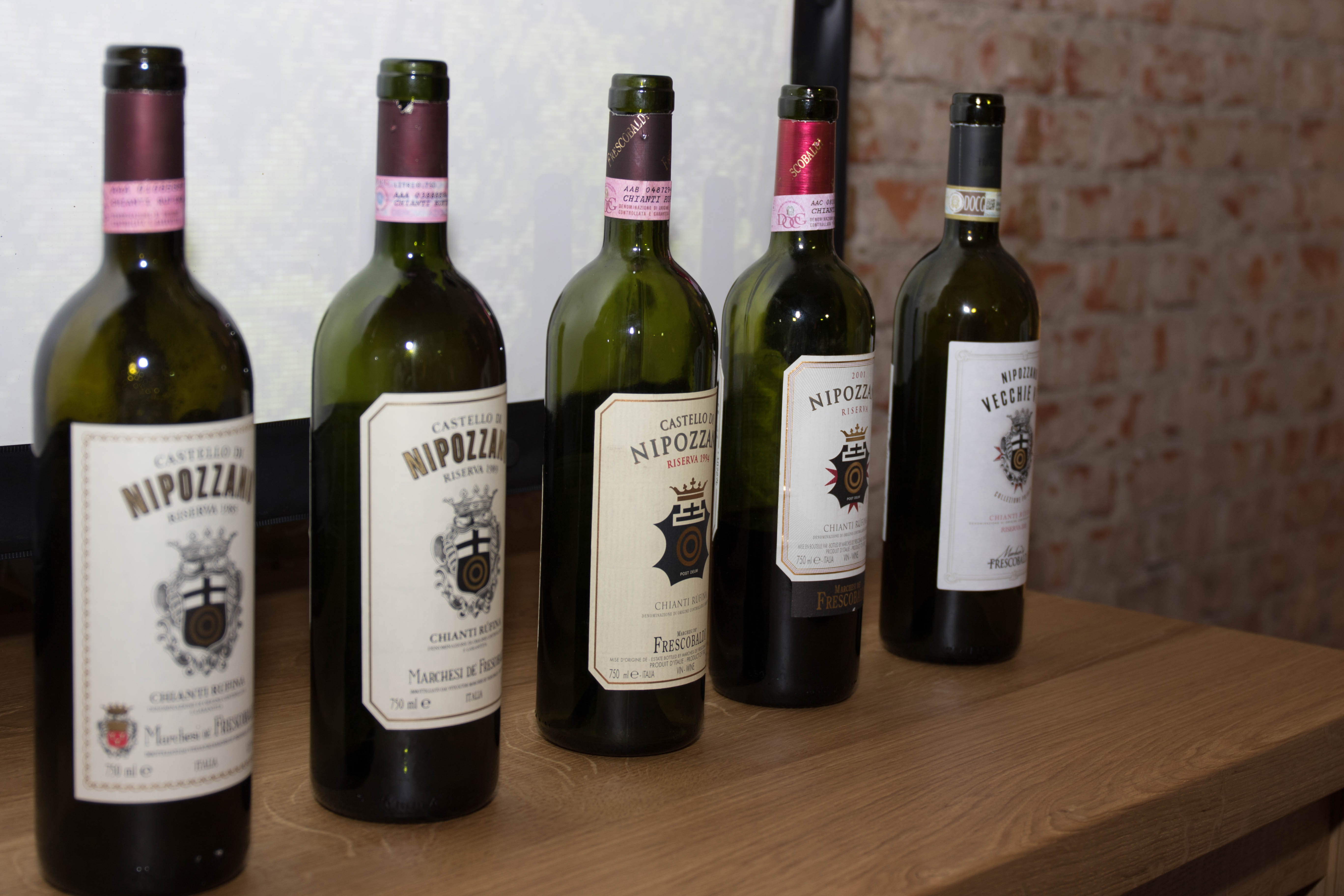 Castello di Nippozano, then, whose name is said to originate in the phrase "without well" (senza pozzo). I'd like to think I actually found some of that heat and dryness in the glasses. The youngest of the bunch was the 2011 Riserva, with overripe dark cherries and plums galore, jammy fruit, yet somewhere in the back of the palate also a wonderfully morbid dusty dryness, salty plum juice and dried herbs. A promising beginning. The 2001: More roundness to the fruit, but good lord, what tannins for a mere Chianti, and at 14 years old! 1994 then matured in earnest, with fruit that has turned into raisiny sweetness and already lost most of its tension. 1989, surprisingly, seemed younger and much more lively, had a right proper punch to it: Sweet cherry juice and cedarwood hitting the palate, fun to drink. Finally, 1985: A wine of extremes, as Frescobaldi told us, with an extremely hot and dry summer following an extremely cold winter. This came closer to the 1994 than to the '89, with a brick red, brownish colour, mature, very slightly bitter fruit, but the tannins still kicking it. An impressive, varied first flight, and those were only the little people from the hillsides, as it were. 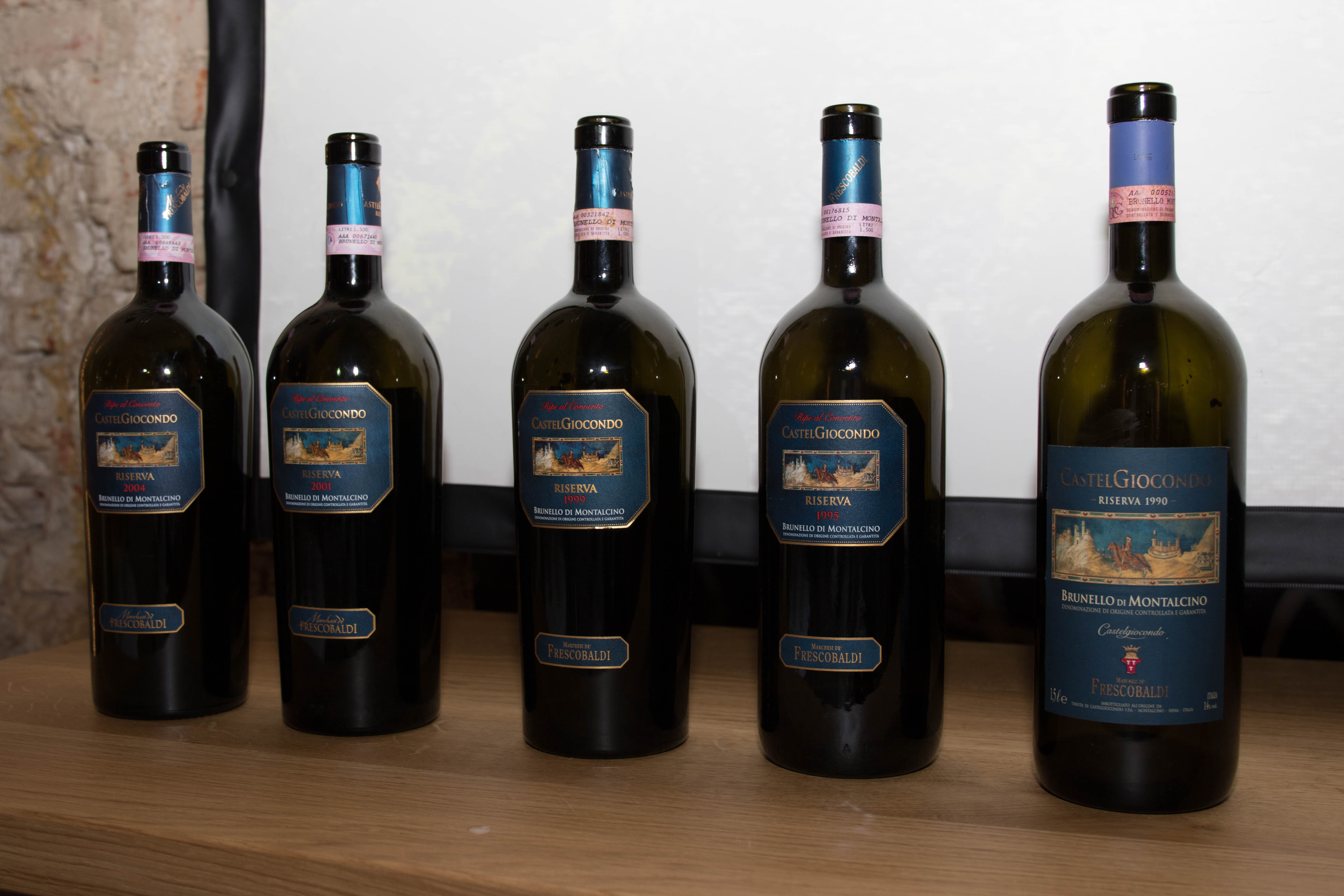 Make way for the big boys, then: Living up to their reputation, I found the Brunellos of Castelgiocondo to be richly traditional. Fermented in concrete and later in large wooden wats, none of the oaky softness from barriques here, just sun-drenched plums, smoked meat and dusty earth under scorching sun. So concentrated, tannic, overpowering and demanding did I find them that with every sip and gurgle, sentences that I willed the marchese to say next formed in my head: "Ladies and gentlemen, to lighten your palate, we will now serve a classical aged Médoc / a German Spätburgunder / a Riesling Kabinett from the Mosel", one of them would go, and "Ladies and gentlemen, if you could now interrupt your tasting, take your glasses and follow me through to the next room, where a wild boar is already roasting on a spit, so that we can all enjoy our Brunellos in more gustatory comfort", went the other. Alas, wishful thinking. On it went, glass hitting lips, palate hitting tannic wall, spit hitting bucket. From the darkly fruity 2004, via the salty, meaty, chewable 2001, the sloe-like 1999 and 1995, I plodded along. And then, the show-stopper of the afternoon, the monument that was the 1990: It began with colour. While much younger wines had already turned brick red with brown edges, this one stood inkily in the glass like a ripe plum. If you look closely you can even see something of this in the picture above. Fruit for days, dark dark fruit, roasted meat, generous sweetness, and - have you guessed it? - a drystone wall of tannin. Again, this seemed much younger than what had come before, although ageless might be the better word in this case.

If all of this sounds more like shock and awe than lip-smacking delight, that was actually my general feeling about the traditional, powerful Brunellos. They impressed me (lastingly in the case of the 1990), but the somewhat lighter Chiantis I actually enjoyed more. It may just have been me, but the dusty, heat-soaked strength of serious Sangiovese seemed out of place in the flutteringly social, shrimp-cocktail atmosphere of this kind of tasting. Let's put it more positively, and make this the first lesson of the afternoon: Sangiovese, young and old, is more than a good food companion. It needs food. It positively cries out for that bistecca alla fiorentina or those pappardelle with wild boar ragù. I am now afraid the marchese may have given me a lasting wild boar fixation. The second lesson (closely related to No. 1): Sangiovese tannins, those assertive, rough-grained, mouthwatering little blighters, are there to stay. They don't really soften, they don't go away. Deal with them. For the only available option in dealing with them, please turn back to lesson one. And the final lesson: Vintage does matter. I was aware of that before, of course, and so were you. But I never had this demonstrated to me as grippingly and immediately as when the marchese straightened his immaculate silk tie and starting charmed his way back in time. Some vintages had withstood age behind their fortresses of tannin, some were succumbing, some seemed immune. When the strapping youthful 1990 Brunello hit my palate right after the sedate 1995, it made me think of Bob Dylans "My back pages":

Ah, but I was so much older then I’m younger than that now

where you can buy Frescobaldi wines

I have worked closely with the Marchesi for 15 years in selling his wines in the UK. Our great relationship has seen him visit some of our restaurants and conduct some of the finest tastings of his amazing wines. To buy these superb wines in the UK visit http://www.wineman.co.uk/brand/marchesi-de-frescobaldi

Frescobaldi is a great…

Frescobaldi is a great winemaker, love what they do.