The wine rambler wraps up this years Silvaner seasons with a blind tasting match. A creamy risotto of caramelised apples, sage and roasted walnuts is on the plates, and two dry 2008 Silvaner Kabinetts are waiting in the glasses of our carefully selected jury.

One hails from the franconian Silvaner heartland, from a nobleman's renowned estate, the other from a young self-described wine grower ("Weinbauer") of the palatine lowlands, as far from Germany's wine nobility as you can possibly get, but with a fierce love for the Silvaner grape. An uneven match, and, what with two completely different bottle shapes, a logistically demanding one. Ok, then, Casteller Hohnart from Castell and just plain Silvaner from Lukas Krauß, let's have a good clean fight from the two of you, no low punches or artificial aromas. 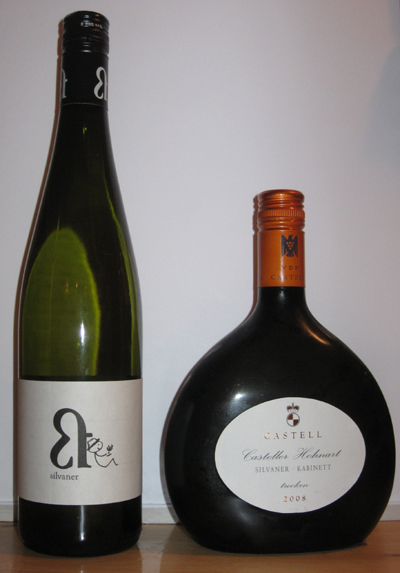 Both wines are straw coloured, tinged with green, with number two a good shade paler than number one. Both don't have over typcial apply and earthy Silvaner smells, but rather mix fresh apples with peaches and grassy notes, with the less colour-intensive number two bringing the riper aromas. Both taste similar as well, and trying to work out the differences was – like every blind tasting – a lesson in how unreliable tasting impressions are. What we could agree on was, roughly, this: Number one is the lighter wine, has more acidity, and the nice fresh apple and peach fruit doesn't seem to be woven into the wine's structure. The taste is also shorter. But it has a classic feeling to it and is very drinkable. Number two is a little plumper, the fruit has more dimensions (hay, herbs, a little minerality, even a little liquorice) and stays on the palate for longer. But it doesn't quite have the easygoing flow of number one.

When their identities were revealed, I was pleased that I had guessed correctly, but there was little doubt that it could as well have gone the other way. Despite strenuous back-and-forth sniffing and gurgling, no clear ranking had emerged during the evening: One half of the panel preferred the fresher, more appetizing version that also seemed to stand up better to the risotto, the other half went for the slightly more complex wine, with the deeper and smoother fruit. With the Lukas Krauß priced at only two thirds of what Castell is asking, coming from an area in no way renowned for its Silvaner pedigree, and, not least, made by a frighteningly young man, it's still fair to say that there was, in the end, a winner.

Looking back to this, I still

Looking back to this, I still cannot quite make up my mind - it certainly was more a question of style than of quality and I am very pleased that we tasted this two wines blind. Going through this exercise every once in a while tells you something about all the factors that have an impact on your tasting sensation. Anyway, I would also like to add my congratulations to Lukas Krauß!

In reply to Looking back to this, I still by torsten