Christmas time, a time of peace, quiet reflection and many calories. The Wine Rambler's Christmas was no different, just add a few more extra calories from lovely wine to the mix. And because combining the food and wine was such a joy, I am going to share some of it with you now. It all started with a sea bass in salt crust with a dry Muscadet, which was a pleasantly light way to kick off the festive food and wine season. After that I felt the need to be more robust and moved on to braised oxtail: 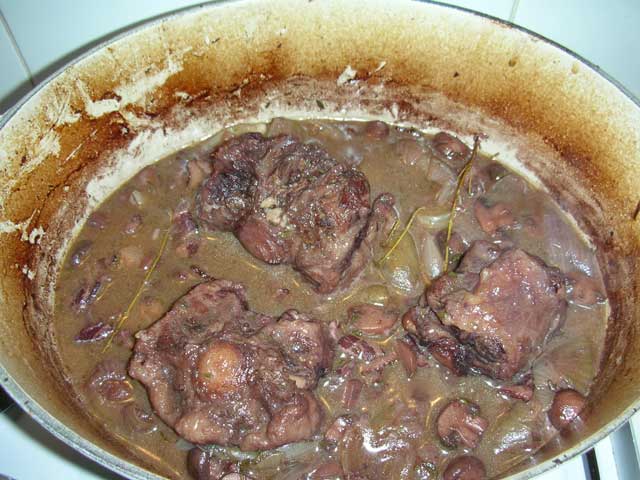 Here I am, drinking a wine from the end of the world. This is both true in geographic terms, seeing as the wine is from Patagonia, and it is also true as the winery is called 'Winery from the end of the world' (Bodega del Fin del Mundo). This Bodega is a fairly new venture, about ten years old, and they grow a variety of red and white varietals on 870 hectares of land. As this part of Patagonia is fairly dry, the vineyards need a computer controlled irrigation system - the water comes from 20 kilometres away and a complete water channel system had to be built for the irrigation. This apparently took two years, and the first vineyards were planted in 1999 - protected from the wind by a complex system of windbreakers. Scared away by all that technology?

K & U have been having quite a winning streak in my cellar for the last couple of months, so I had high hopes for this argentinian malbec, a variety I felt pressured into trying by all the buzz about it - on this blog and elsewhere.

And a wonderful bottle it is: