Wine Rambler full committee meeting. Two Sauvignon Blancs nice and cool, ready for the first sip. The tasting would nominally be blind, but it should be a walk in the park to tell them apart. One from New Zealand, Astrolabe's 2008 "Discovery": more explosively, exotically fruity, surely. One from Germany, the 2008 Meersburger Sängerhalde Sauvignon Blanc from Aufricht, the Lake Constance's ambitious star horse: more subdued, but with more depth and minerality, maybe? We knew what we were doing, we had done it before. It would be a pleasant evening with a laid-back broadening of wine horizons. 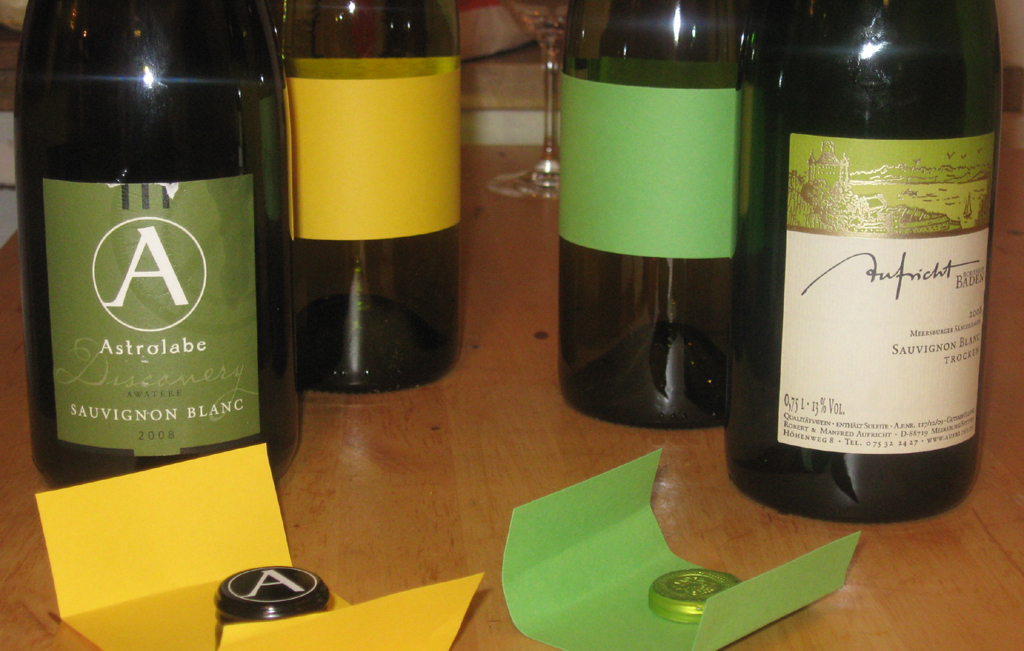 Glasses rinsed, monkfish and shrimp already in the frying pan, wine ramblers contented and full of calm anticipation. What could possibly go wrong?

The evening took a decisive turn for the unexpected, however, with the first sniff taken of the contestant in yellow: Without much experience of the grape, a little wary because of its reputation for tartness and sometimes uncouth flavours, we were still in no way prepared for this abyss of bone-dry, penetrating cassis and broccoli. In the mouth as well, this was like very young, unoaked Cabernet. Just white. Green peppers, ground cassis leaves, green-blackish flavours. Torsten was unfavourably reminded of curly kale, a variety of cabbage inexplicably popular in northern Germany. I was thinking of a certain herb from my grandfathers garden that is distinctive, but should be used sparingly - lovage. But we were most taken aback by the lack of any citrussy, exotic or gooseberry flavours to balance out this punch of powerful dark fruit and vegetable juices. Whatever you thought of it, it was a sure sign of Germanic seriousness. Or was it?

The other wine was softer on the nose and palate, had cassis as well, but as one ingredient in a more balanced mix, with candied grapefruit and a type of candy known as "Gletschereis" in Germany, but probably not known elsewhere. Less explosive, more creamy and serious than we had expected, but this had to be the New Zealand version.

When the true identities were revealed, they wiped the confident smiles off two wine ramblers' faces faster than a greasy finger print off a Riedel glass: As you have no doubt guessed by now, what we thought of the German wine was in fact, erm, not, and what we thought of as... well, it's fair to say we had, both of us, got it wrong, had indeed been exceptionally clueless. 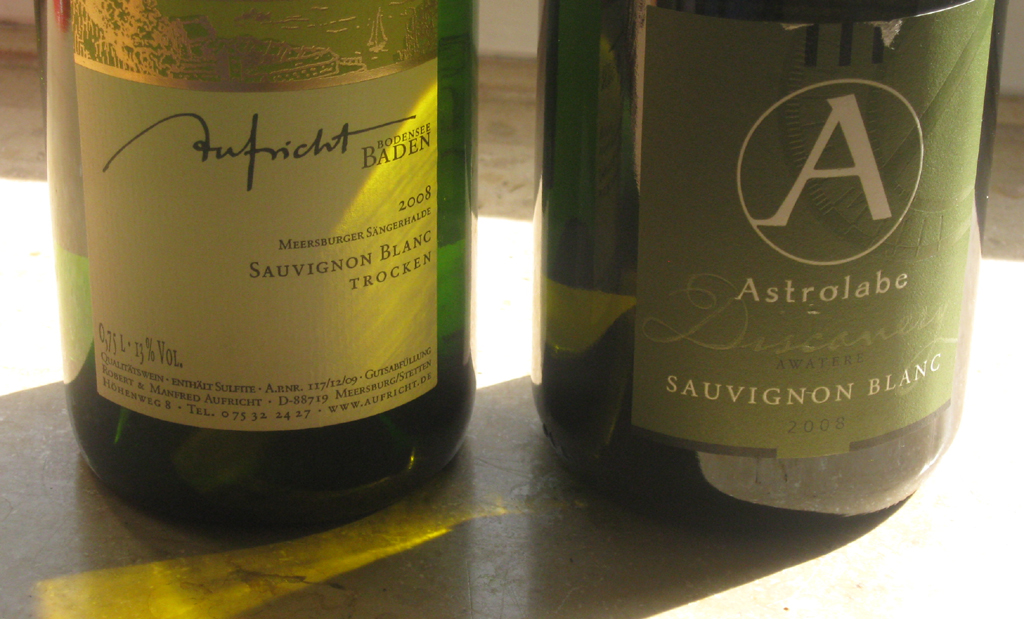 So what to make of this heavy-hitting New Zealand Sauvignon that defies clichés of new world fruitiness, has enormous character and attitude, but is so blunt in its way that it is fairly hard to like? We, at any rate, failed to even finish the bottle. We can't completely rule out that this particular bottle was not in ideal condition, although it does come with a screw cap.

Finally, the fairly convincing showing from Lake Constance should not be overlooked, although the focus was inevitably on a baffling aromatic direction of white wine we had not at all expected to be confronted with that night.

Wonderful article, and a

Wonderful article, and a great reminder of the vital importance of blind tasting in disabusing us of easy stereotypes. I'll have to check out both those Sauv Blancs...

In reply to Wonderful article, and a by Tyce (Wine Tri…

Thanks for your comment, Tyce. Let us know what you thought of the two wines - it would be really interesting to get another perspective.

As we got quite a bit of feedback on this post on Twitter, I thought I share a little bit about how this tasting came to be. It all started when a good friend of mine went to New Zealand for a few weeks. Even though he is not really a wine drinker (or was not really one), he still brought back a few bottles of an Astrolabe Sauvignon Blanc that he really liked. He opened a bottle for me last summer in Munich and I witnessed a fruit explosion extraordinaire.

When we published that on the Wine Rambler, the general manager of Astrolabe contacted us, which eventually led to an online interview on the Astrolabe winery and NZ winemaking in the Web 2.0 world.

A few months later I walked into a Waitrose in London and found another Astrolabe wine, the Discovery from above, in the fine wine section. I bought it out of curiosity - it was a little more expensive than the first one I had tried, so I expected great things. Before I had a chance to drink it, Julian expressed an interest in trying one too. So the idea for this tasting was born.

We decided to wait until spring as it seemed a more suitable time for drinking Sauvignon. Well, and then instead of a fruit explosion we got a vegetable, cabbage and fruit explosion of a type we had not expected. When I checked the tasting profile on the Astrolabe website, it said nothing about cabbage, but promised 'A linear, pure wine with clean flavours of currants, gooseberry and citrus. Finishes crisp and dry.' It also said: 'Best enjoyed when young and fresh, but has the potential to age gracefully until early 2010.' This made me think that maybe the wine would have been beyond its peak anyway and maybe it was stored badly on the way from NZ or something else had happened to it. Obviously, some wines are made to be enjoyed early and it is good that Astrolabe clearly state that this is one of them. It is still a strange feeling to spend £15 on a wine that after just two years turns into cabbage - so maybe it did indeed have an accident. Unless I come by another Waitrose and decide to get another bottle soon we may never know.

What I do know, however, is that the Discovery left a lasting impression on me. It was a very powerful drinking experience as it was different in its extreme attitude to pretty much any wine I have had before. It could easily kick the ass of the average red in terms of power and I have smelled cabbage that was less cabbage-y than this wine.

So I really like it for its attitude. I am just not sure if I can or would want to have more than two glasses of it.

In reply to A little background by torsten

I didn't like that excessive artificial vegetal cassis, but the wine made its impression and so I was curious, too. I found some positive opinions on the web, but I didn't recognise the wine we had. However, the tasting notes on the web were from 2008 and (with my limited experience) I came to the conclusion, too, that the wine must have been meant to be drunken earlier. Or something has gone wrong with it...

In reply to excessive vegetal cassis by Sabine

I think you are right - and

I think you are right - and it seems to me I may have to buy another bottle, just to settle the question...