If Swabia were a nation, it would as of now be the world's only nation ruled by an environmentalist green prime minister. And it would have a national grape. And that grape's name would be Trollinger. Trollinger, known also as Vernatsch in the Alto Adige region of northern Italy, a grape that Jancis Robinson's authoritative Oxford Companion to Wine classifies as "distinctly ordinary". Not many outside of Württemberg deny that this is so. What it makes for, so received wisdom has it, are pale reds with harmless light strawberry aromatics and hints of almonds at best, and a thin, metallic, boiled mash of berries if you're not so lucky. 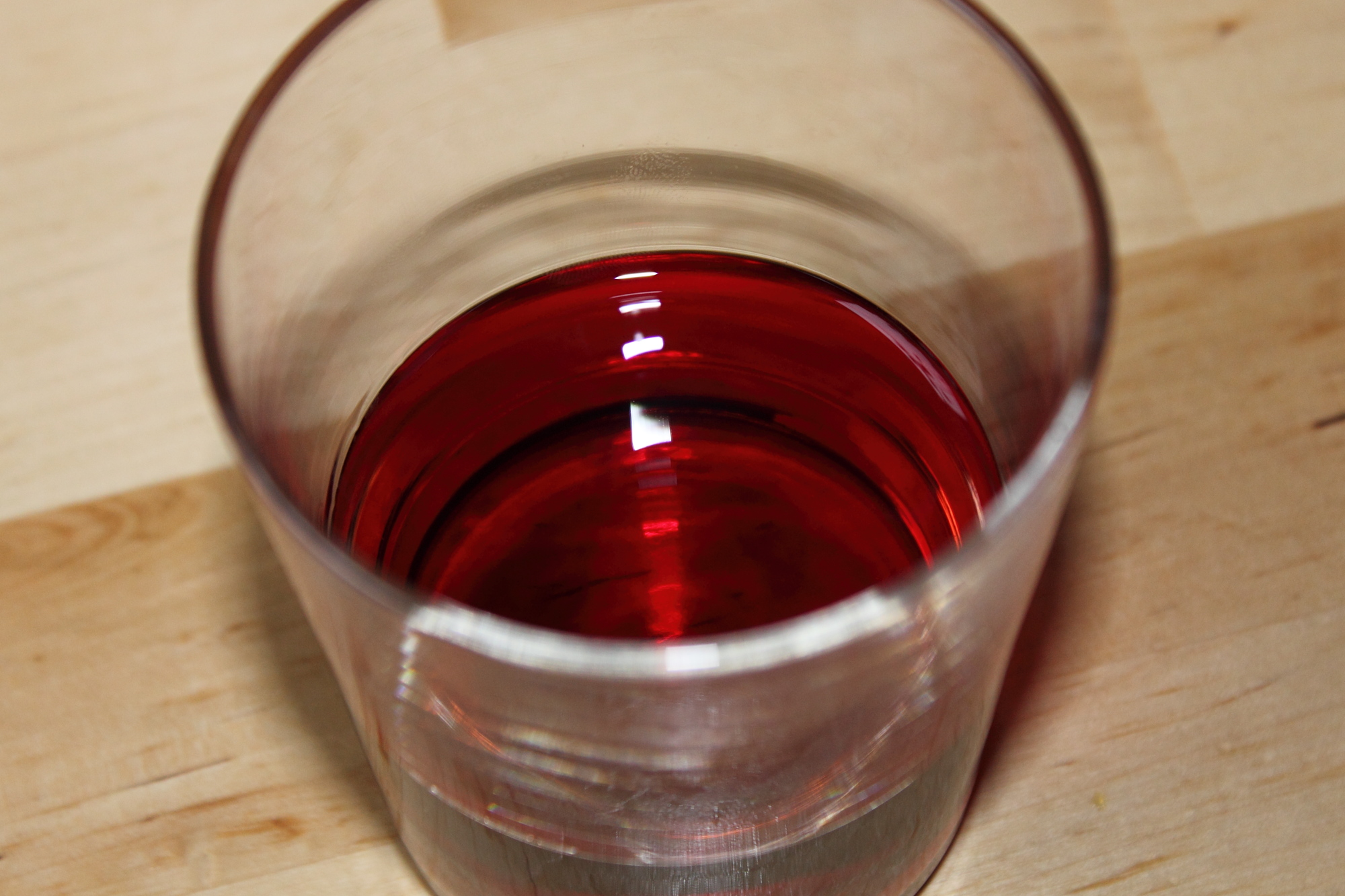 The Swabians, however, will have none of it, and stubbornly and inexplicably stand by their grape, downing Trollinger as if it had the proverbial cure inside. It weren't so bad if this was a bread-and-butter grape like Müller-Thurgau, unexciting, but at least easy to grow and reliable even on vineyards with less than ideal soil, climate and slope. But it is very much a diva among varieties and needs ideal conditions to fully ripen, effectively making every acre of it an acre lost for Riesling or Pinot Noir. So to see for myself if this is just a lesson in sociology or collective psychology (for which read provincialism, parochialism and auto-suggestion), I decided to taste three Trollingers that had received good press.

Is there something about those wines that a sceptical Rambler could learn to enjoy, appreciate, even love? Could there be a secret to them, an an enchanting, unexpected side, a glimpse onto some taste experience accessible only to loyalists, lovers and native sons? To explain what kind of experience I have in mind, this Wine Rambler being a native of sorts of those parts, here's a true story. Bear with me, kind reader. It so happened that I was travelling by car from Munich to a destination north of Stuttgart on a family assignment. To do that, you have to cross the Swabian Jura, a range of hills, or rather a high plateau that climbs imperceptibly from the south, but falls in a steep precipice down to the Neckar valley in the north. It is also famously cold, inhospitable and often foggy. So it was that day. With poor visibility, the road slippery, and my driving skills being basic at best, it was a nervous crawl over the winding motorway. For a while, I was unable to make out much of the landscape, nor to tell how far I had already come down the slope.

These mist-covered mountains are a home now for me But my home is the lowlands and always will be,

I had finally descended far enough for the fog to dissolve and the sun to break through. Suddenly, the green and industrious Württemberg lowlands stretched gloriously below me. Memory may play tricks on me here, but it seemed to me that I could see every single Mercedes Benz from Nürtingen to Stuttgart gleaming in the sun. Entranced, I became lost in a vision of what Richard Thompson calls "a life of small horizons". In a kind of out-of body experience, I could see myself open a few extra savings accounts, buy a house with a neat little front garden, polish my car, sweep the side-walk on Saturdays, and vote conservative (or green, for that matter) for the rest of my life. It was so strangely attractive a reverie that I was only jolted out of it by the honk of a very real Mercedes Benz, its headlights inches from my rear bumper, reminding me that the locals don't polish their cars just to have them standing in front of the house - they also take them joyriding on the numerous motorways around Stuttgart, and to hunt down slower cars that get in their way. The rest of the drive then passed in a less visionary mood. But sorry, I think I did promise you three Trollinger reviews. Let's start with the 09 "Steillage" (steep slope) from Weingut Zipf, based in the village of Löwenstein in the lower Neckar region. Light-coloured at a transparent cherry red, but for a Trollinger, actually fairly dark. Cherries and red currants in the nose, and: strawberry fields forever. Not just strawberry juice, I mean to say, but also actual straw and a bit of garden earth, then changing in a cherry jam and almond direction with more air exposure. The palate is unexpectedly substantial, with some spices, juniper and freshly cut green wood in there. A splash of Lemberger in there as well, perchance? In any case, a strong and characterful first contender (enjoyable). 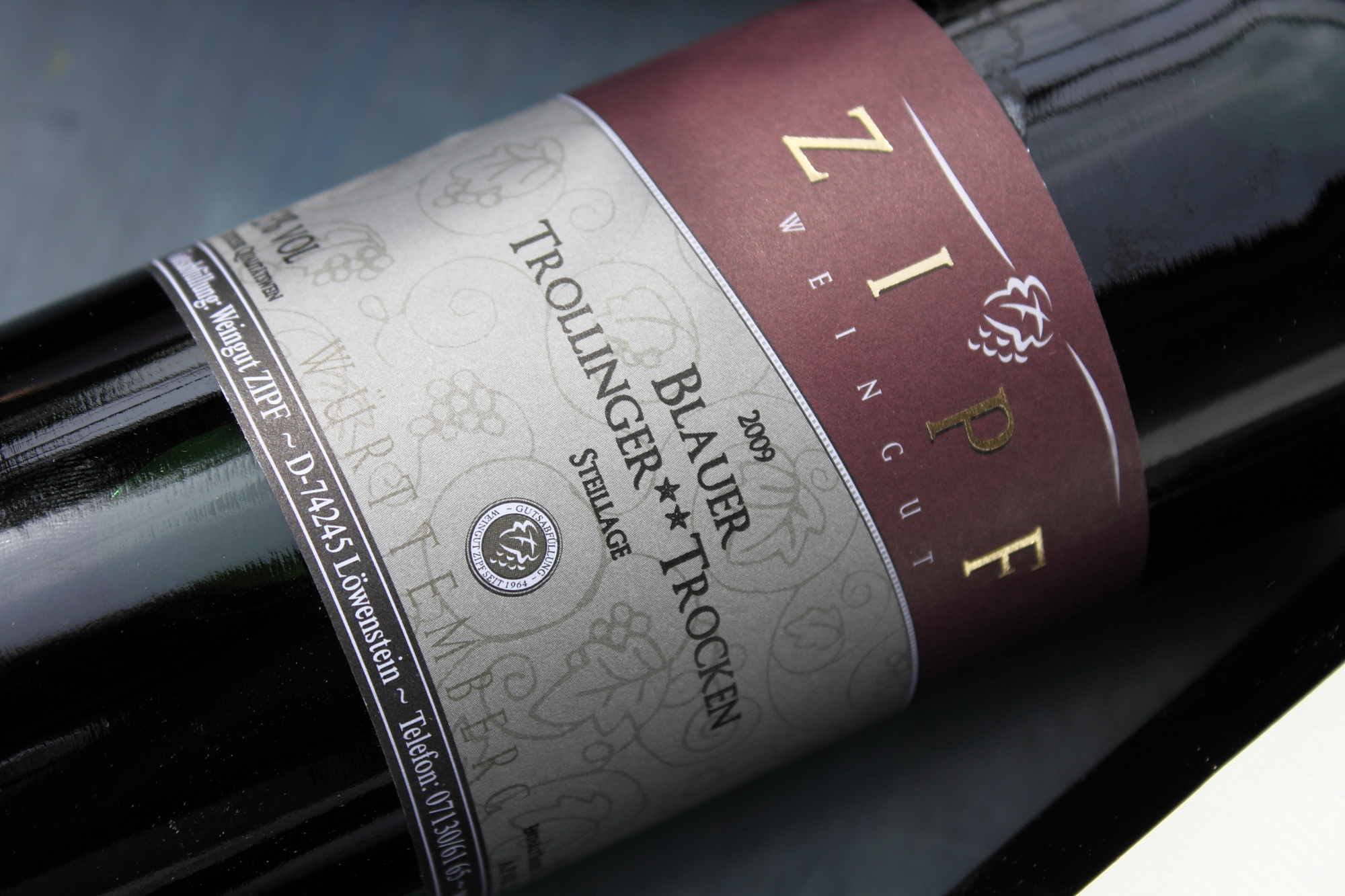 Next, the 2009 Untertürkheimer Herzogenberg "Rädles" from Hans-Peter Wöhrwag. Wöhrwag, one of the long-standing names of the Württemberg wine scene, works the surprisingly steep and spectacular vineyards around Stuttgart. Now here we have Trollinger colour: Light cherry red that would easily pass for rosé in many parts of the world. Strawberry juice and a hint of sour cherries in the nose, not too intensive though. A good dosage of carbon dioxide, almost frizzante, and a slightly metallic, but also earthy strawberry fruit on the palate. Certainly the typical and "traditional" Trollinger I had expected to find, but is that necessarily a good thing? (serviceable) 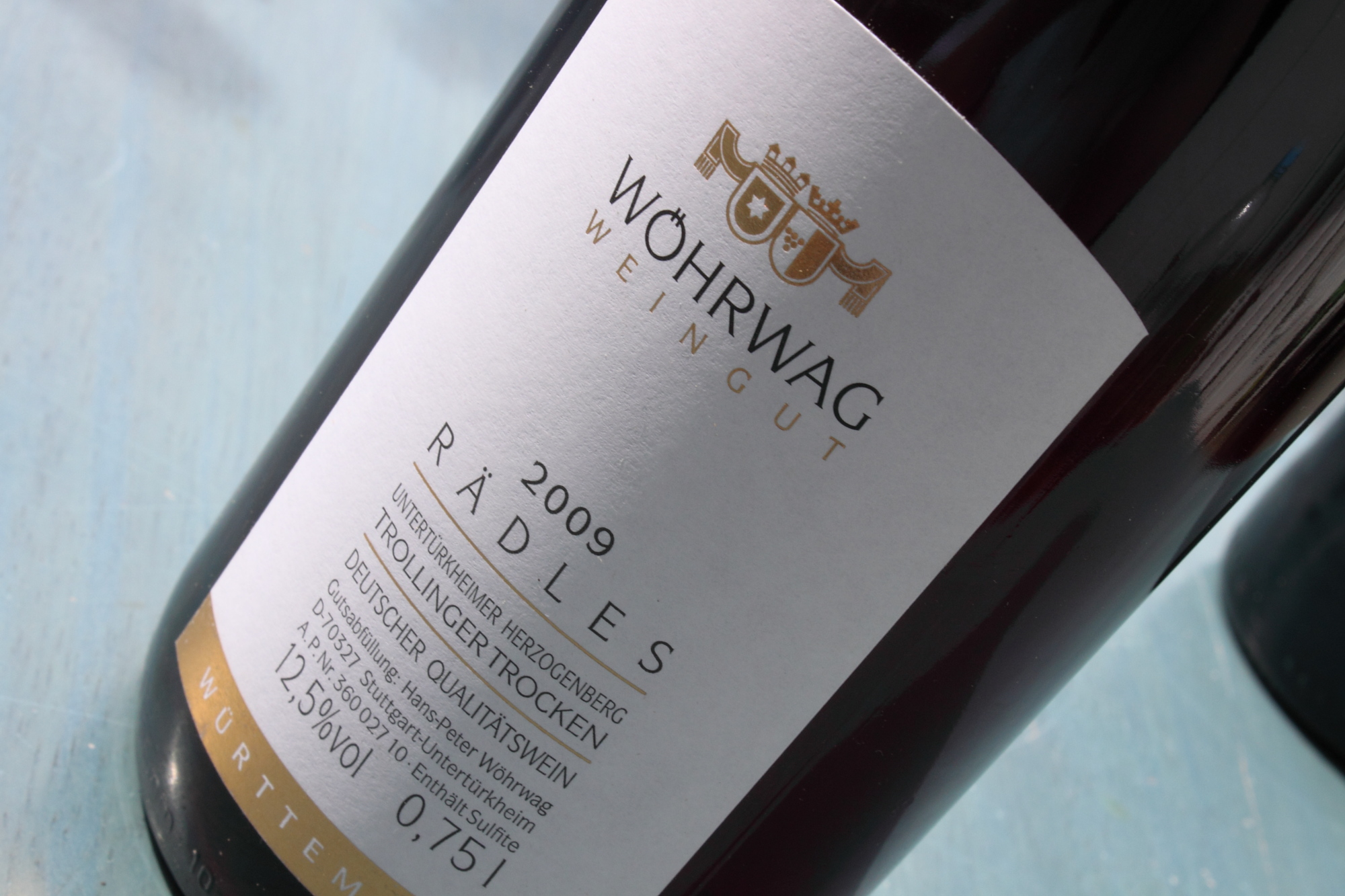 Finally, high expectations for a winery that has impressed us recently: Aldinger of Fellbach, just outside of Stuttgart. Their two-starred 2010 Fellbacher Lämmler Trollinger positioned itself in the middle, colour-wise, with a nice purple rim to its cherry colour. Strawberries, red currants and violets hit the nose, a hint of something sweaty and funky is coming through as well. But the most interesting nose so for. Nicely balanced on the palate, appetising sour cherry notes with good acidity and a mid-length dry and spicy finish. Here too, carbon dioxide has been added for no good reason, but it's not as stinging as in the last wine, and it passes away quickly once you let the wine breathe for a while. With this nicely balanced and refreshing light red, we have a winner (enjoyable). 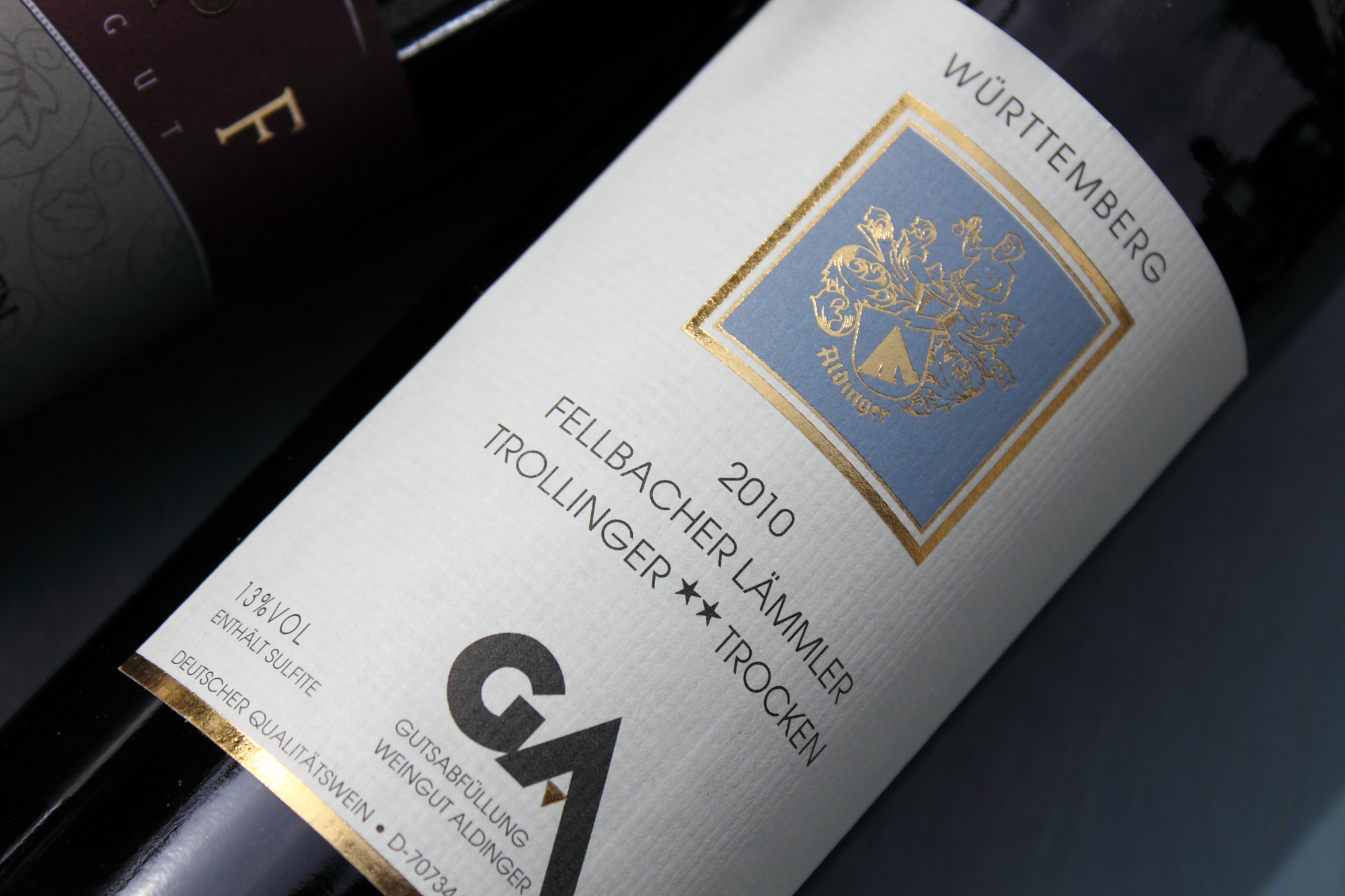 So did a get a transcendent glimpse into a yet undiscovered wine country when I took the A 8 down the jurassic hills into the Swabian lowlands? I think rather not. Sadly, no such transcendent states and mind-altering experiences for me so far in Trollinger land. But recognisable varietal character, regional roots and sound quality overall in light reds that benefit from being served slightly chilled. That, too, is very Swabian. And that's got to count for something.

After having lived in the

After having lived in the southern parts of Germany, namely in Tübingen, I do share some of your musings with regards to Trollinger. Bearing in mind that I was raised on Spätburgunder from the Ahrtal I have to admit that I have shared a bottle or two of Trollinger aka "Zechwein" without any remorse. Mind you, the bottles seemed to help me understand the Swabian dialect. Anyhow, after my move to Berli, I have caught myself pondering the thought of ordering a case of Aldinger's finest T., but 2010's already sold out, except for his Edition wines.

Which 2009 German wines is the Wine Rambler thinking about ordering? Me has got an eye on Adeneuer, Bercher, Salwey, Schwegler, Knipser and Huber - though I have come to understand that the Rambler is not an avid fan of the latter two.

In reply to After having lived in the by Namri

Wine and dialect - this is a glorious topic to bring up, which we must somehow journalistically address one day. I'll just say this: Give me a bottle of Trollinger, some lentils, Spätzle and sausages and see if I don't speak in tongues as well.

2009 - no more dry whites from that vintage, for my part. A bit too much of the oomph for me at the end. But a classic red wine vintage - I'm really undecided on any names, because I'm partly looking for new, lesser-known stuff to share over the blog. Knipser and Huber though - what makes you think we don't like them? Au contraire, Knipser is going from strengh to strength, cutting edge even in dry whites where previously I found them a little too crowd-pleasing. And Huber is a giant of German Pinot Noir, couldn't possibly say anything bad about his wines.
Best from Julian

In reply to Swabian dialect by Julian

We had Swabian friends over

We had Swabian friends over the other day and tucked in into some homemade Käsespätzle w/lentils accompanied by Weinsberg's 1G Riesling. And all was good.

I agree that 2009 is a good vintage for the reds, and taking 2010&2011's assumed sub-par performance for reds into account (if I am informed correctly) , another good reason to start making space in the cellar now. Re Knipser & Huber I vaguely recall reading on your (shared) blog that the Knipser's tend to be playing it too safe and the Huber's being overextracted, that was all. I will be placing my order chez Salwey this week, although I find their pricing policy a little off at times, i.e. my wine merchant offers their wines below Salwey's "official" price

In reply to We had Swabian friends over by namri

Can I just add that all this talk about Swabian food has made me really hungry? On the subject of Knipser, I do actually consider them one of Germany's most interesting producers - partly because of the reason Julian mentioned, but also because of some really interesting things they do with white wine, such as fantastic Chardonny or featuring Gelber Orleans. It does seem though that I was luckier with my 2009 whites than Julian, because so far I have been very happy with the vintage.

Thanks to both for the comments, and especially Julian for featuring the Swabian epiphany. I do now find myself humming "Brothers in Arms" while cycling, but so far no Swabian mountains have appeared in London. Or mist, for that matter. A Swabian can dream though...

In reply to Käsespätzle by torsten

Speaking of which, today my

Speaking of which, today my annual supply of Huber's Spätburgunder formerly known as Junge Reben 2009 landed on my doorsteps and for obvious reasons I had to crack one open tonight. Seemingly 2009's reds will be delivering as hinted at by some pundits beforehand. Huber's entry level has been upped from below the 10 EUR mark to 11 EUR, but I believe this one is still good value. Easy&Enjoyable to drink, but with enough character to be taken seriously - well balanced and great nose (honey, sour cherries, chalkiness).