It's Only Natural: Impressions from the Real Wine Fair 2013

Natural wine is "in", no doubt. It fits the Zeitgeist of minimal intervention, non-industrial, organic, "honest" produce that is increasingly sought after by consumers. And yet there is also confusion. When I announced I was going to a natural wine fair I received lots of blank stares and the odd question of "you mean organic and stuff?" or "as opposed to unnatural wine?". That confusion partly comes from the fact that there is no generally accepted, legally binding definition so any wine can be marketed as "natural"; personally I also find some proponents of the movement a little overzealous. On the other hand I value sustainable winemaking and seek out artisan wines for individuality and character.

In short, I am both tempted and confused by natural wine, so last month's Real Wine Fair was a timely chance to explore the field and question my attitude. Or, to get into the musical theme of this post, "It's only natural / That I should want to / Be there with you."

The Real Wine Fair, in the words of the organisers, "is an independent festival of natural growers and winemakers, comprising those who work organically and/or biodynamically and with few or zero interventions in the winery." However, they also admit that natural wine is a "relative rather than absolute or precise term" and link it to individual endeavours of artisan producers. Working without chemicals, artificial yeasts or other additives and only using minimal amounts of or no sulphur at all also feature in the concept.

It's circumstantial / It's nothing written in the sky

I believe that winemakers are free to make wine in any way they want, as long as they don't damage the environment, mislead consumers or endanger the health of customers. It is not my place to lecture them on which methods to choose. Personally though I favour sustainable winemaking and approaches that create individual wines with character. So in general using naturally occurring yeasts is a plus in my book, as are other practices that are now labelled as natural. However, I am wary of an ill-reflected ideology that demonises intervention. If you wonder why I suggest you find some wild vines and wait for the grapes to fall off and then drink the results of truly natural fermentation. Agriculture is and always has been human intervention - even in the time of the ancients and to the extent that much of our "natural" environment has been shaped by humans over thousands of years.

Ice will melt, water will boil / You and I can shake off this mortal coil / It's bigger than us / You don't have to worry about it

So I cannot see any reason to damn a method simply based on the fact that it is an intervention. How do we judge the adding of sulphites then? Sulphur helps preserve and stabilise wine, has been used in winemaking since Roman times, generally has less negative effect on your health than the alcohol in wine and even occurs naturally during the fermentation process. Now, high dosages of sulphur can be unpleasant to some, especially asthmatics, but the use of sulphur has gone down over the last decades anyway as winemaking processes have improved. If you can manage without and still deliver quality wine that won't grow antlers and fur over time go ahead. However, having come across sulfite-free wines whose bouquet would better be described as swamp gas I cannot see why this would be a method to fight for religiously as some do. Because of this context I was curious to learn about the state of natural wine and especially how it is currently presented. To that end I used a somewhat unusual method: instead of asking questions (such as: what does "natural mean for you?", "where do you stand on sulphur?") I decided to let the producers set the wines in whichever context they wanted without giving any lead. I would attend this fair like a curious consumer, try wines that appeal to me and wait what would happen.

Ready or not, here comes the drop / You feel lucky when you know where you are

Before we get into the wines an observation on what was and what was not available: 90 of the 110 producers came from France, Spain, Portugal and Italy; Central Europe was not present at all; and there were more producers from Georgia than from the whole new world combined. This reflects the portfolio of the merchants who support the fair as well as the traditional Georgian winemaking that is probably as "natural" as you can get, but if you consider how many producers work organically or biodynamically in countries like Germany it would have been nice to see more regional diversity.

It's bigger than us / You don't have to worry about it

The fair was not lacking in terms of diversity of styles though. I was particularly interested in finding out more about the wines from Georgia. Georgia is one of the oldest wine regions in the world and in addition to unique traditional approaches to winemaking it also has a wide range of indigenous grape varieties. After the fall of the Soviet Empire Georgian wines have become somewhat more visible internationally, but most of the export still goes to former Soviet countries. The wines I was particularly looking forward to were the Orange wines. These are made from white grape varieties but treated like red wine, i.e. macerated on the skins (and often with the stems too) which results in an orange tinge. Fermentation traditionally happens in qvevris, large clay vessels, in which the skins, juice and stems are sealed away to ferment and age, without any additives, for months or even years. This leads to wines that are not just unusual in terms of colour - in fact I had been warned they may not be to my taste or that I would at least find them challenging.

You don't have to say / I know you're afraid 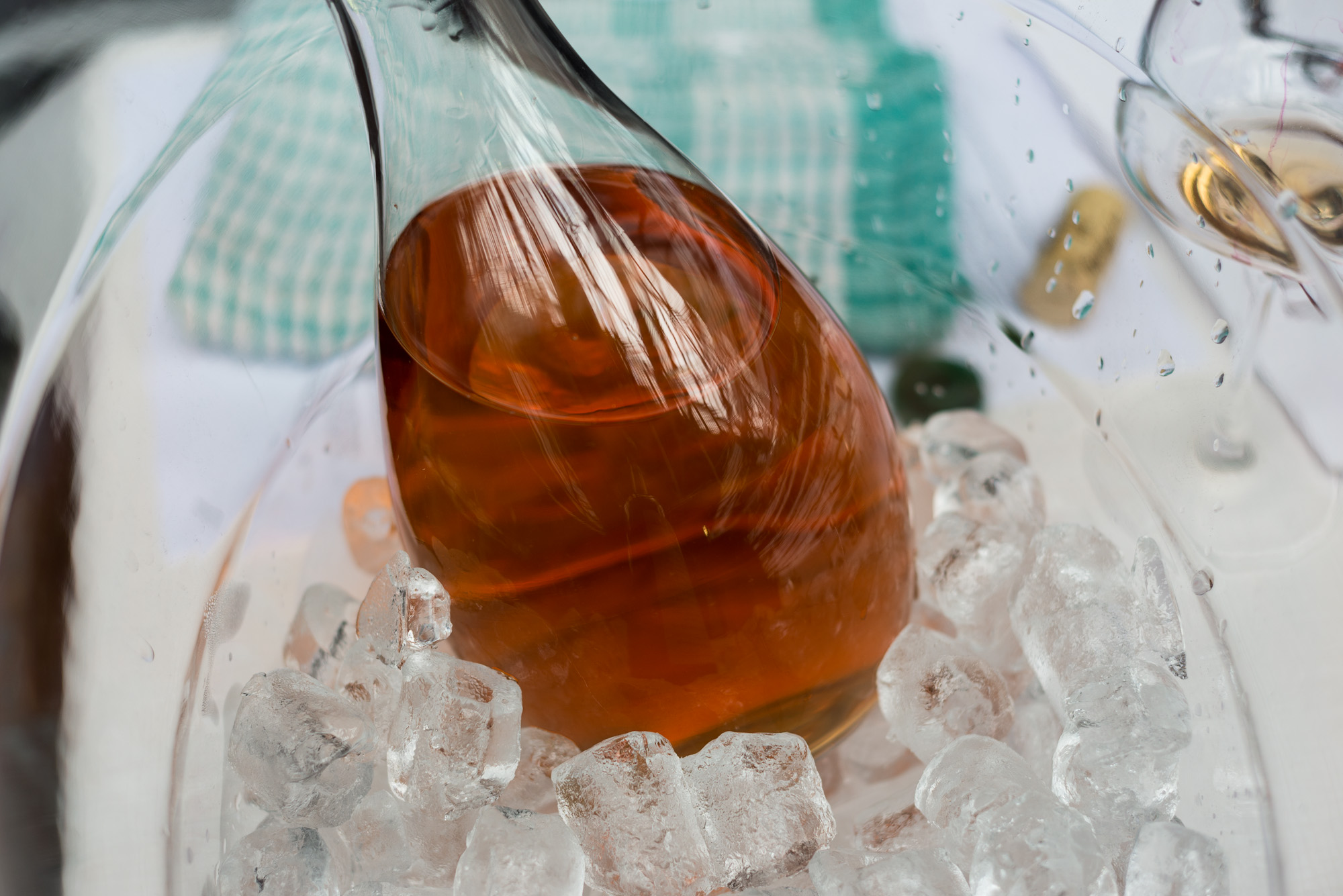 The latter I cannot completely deny, but most importantly my Georgian experience was refreshingly different. Some of the unsuspecting customers I watched found it harder to get to terms with the wines - Sunday was open to the general public and at public tastings I watch the reactions of the civilians closely. In the case of the Georgian wines that reaction was not bad as such but colour and the oxidised character meant customers mistook them for fortified wines. As most of the Georgians present spoke very little English this misunderstanding was not easy addressed. The exception was Nika Bakhia who in his shamelessly flirting with visitors shared much insight on Georgian wine. Nika had some Rkatsiteli on show (a white wine that came with a hunger-inducing smoked salami finish), several Saperavis (probably the most accessible Georgian wines I tasted) and a rather nice Chacha (a liquor made from grape pomace not too dissimilar to Grappa).

What I most strongly remember about the Georgian wines, in fact I can still recall the taste sensation, is the flavour and aroma of salami and smoked Bavarian cheese. Many wines had a savoury character; tasting them made me hungry and conjured images of either a warm sunset at the Black Sea or a snowed-in cabin in the Georgian woods - both with a healthy amount of rustic food (Nika offered smoked cheese with his wines). Robust textures, oxidised aromas, savoury flavours were common, but some of the wines also stood out with refreshing acidity, so don't think of them just in savoury terms. Even so several of the wines, especially the orange ones, are not easy fare for palates trained on standard Pinot Grigio or Sauvignon Blanc and may not be for every occasion. They do however provide a welcome change to overly harmonised international wine styles.

It's easy when you don't try going on first impressions / Man in a cage has made his confession / Now, you've seen me at my worst / And it won't be the last time I'm down there

Compared to the Georgian fare many other "real" wines almost felt normal. I will have to qualify that by saying that I frequently drink wines from smaller producers for whom indigenous fermentation is the norm and organic practice increasingly common. In that sense walking along the Real Wine Fair felt not that different to tastings I usually attend. After a short "visit" to New Zealand I spent some time in France, Loire and Alsace in particular, and found wines that reflected the regions and were quite enjoyable. For instance, I liked the Pinots (white and red) from Albert Mann and also their Muscat that had a fairly serious, clean presence, and I enjoyed unfiltered Rieslings from Domaine Audrey & Christian Binner such as the Kaefferkopf that had an intriguingly funky nose combined with lovely herb candy flavours. Another interesting experience was tasting my way through the Trentino. The winemakers here, even those who spoke almost no English, insisted on rinsing my glass after every wine and used their hands and whichever other language they spoke to share some of their stories. One of them, Alessandro Fanti, was pretty fluent in German and introduced me to Manzoni Bianco, a cross between Riesling and Pinot Blanc, which he champions in the region. These wines have both freshness and creaminess and I enjoyed them so much I will seek out more Manzoni Bianco. For Alessandro "organic is not" enough in the sense that he favours careful manual work in the vineyards that not only excludes chemicals but also avoids trimming of shots in favour of carefully twisting them around. The approach is one of a craftsman relying on instinct and not one driven by abstract theory.

It's circumstantial / It's something I was born to / It's only natural / Can I help it if I want to?

Like Alessandro, the people I talked to are proud of the work that goes into the vineyards and they mentioned terroir as often as any French winemaker might. No one preached at me, I encountered no zealots and everyone spoke about making wine as a personal undertaking and not in terms of right and wrong. The word "natural" was barely mentioned and organic practices only came up as part of a broader arsenal of techniques.

This meant that it was the wines and not an ideology that took centre stage, alongside the personalities of the winemakers of course. Compared to other tastings I encountered more wines with noticeable oxidised character, perhaps more unusual flavours and some wines that were a little more challenging but other than that it was not a radically different experience. And that is a good thing in my book.

Thanks for the nice piece. You are one of the most articulate writers out there. Keep up the good spirit!!!

In reply to Danke by Arto Koskelo

Thanks so much for the compliment, Arto! Coming from you it means a lot!