London wine merchants: why not to buy German wine from Harrods

What could be a better Christmas present than a mammoth tusk? If you too cannot imagine anything better, you are certainly in line with some of the staff and customers of Harrods, the famous London department store. 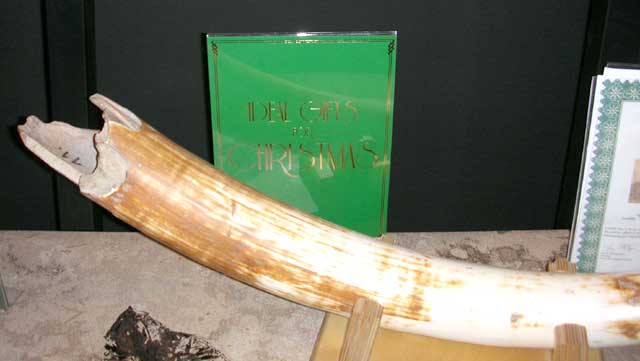 I visited this temple of conspicuous consumption earlier today, but as I had already organised all my Christmas presents a while ago, I showed the tusk and another £47,000 fossil that also was on sale the cold shoulder and moved on to the wine shop in the basement, eager to explore what delights it might offer - especially with regards to German wine. I mean, where better to go, one would think, than Harrods if it comes to finding something unusual and extraordinary, right? 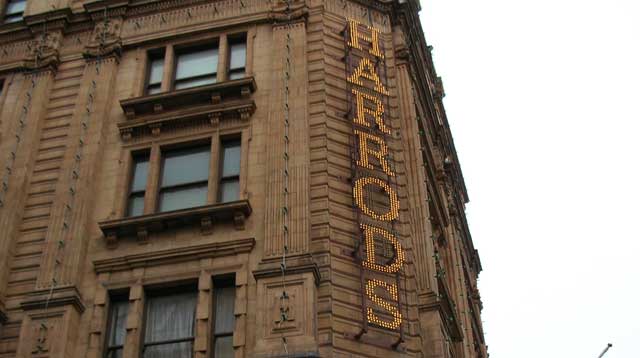 Well, extraordinary as Harrods may be, I could not help but be a little disappointed by what I found in the wine shop. It is not that the shop is not big enough or that the wine was not well presented. The selection of wine does also not lack in quality. That the wine is not cheap will also not be a surprise, but it also has to be added that you will find wine for around £10 too (if you look very very hard). The disappointment stems more from that fact that Harrods, instead of catering for the wine snob (who may be annoying, but loves wine), seem to cater for the general snob, who mostly cares about their wine being French and expensive. That may not be a surprise if you think about the people who actually spend money at Harrods, but it is still a shame. But let's be systematic about it. 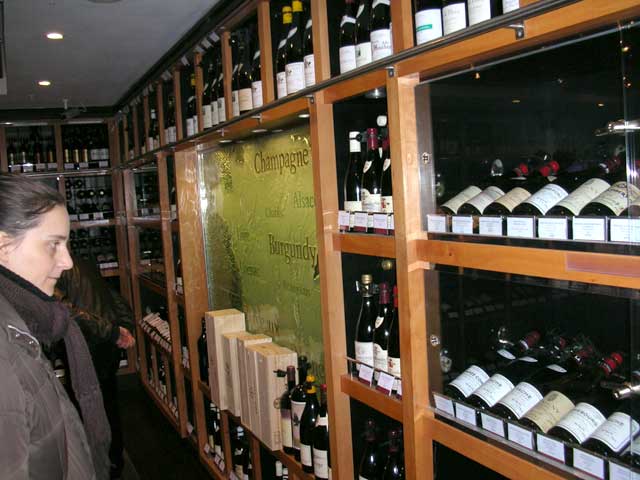 So this is a shop about French wine. In fact, there is not only more wine from France than from any other country, there seems to be more French wine at Harrods than from all other countries combined. A map on the wall shows the famous wine producing regions of France, featuring Bordeaux and Burgundy, of course, but you will also see Chablis and Champagne - no surprise about the latter as Harrods offer an excellent range of Champagne. Leaving the bubbly and the other countries behind, you enter the main section of the wine shop, to be surrounded by French wine. 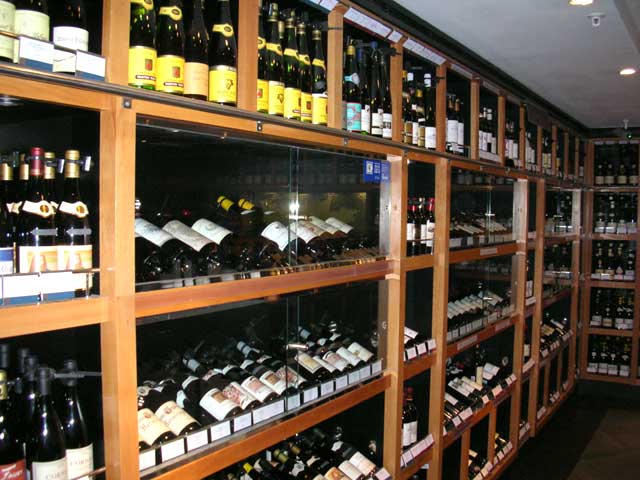 You will find that there is cheap French wine available, if you think paying over £10 is cheap for a bottle of plonk, of course. However, what your eyes will inevitably be drawn to is the range of fine wine. If it comes to France, I always find myself attracted to wines from Paulliac, partly because a few years ago I had a more than memorable encounter with a 1994 Château Pontet-Canet (at an early meeting of what later would become the Wine Rambler committee). Well, you can buy Pontet-Canet here too, and it does not even have to cost more than £60 for one of the cheaper vintages like the 2004. 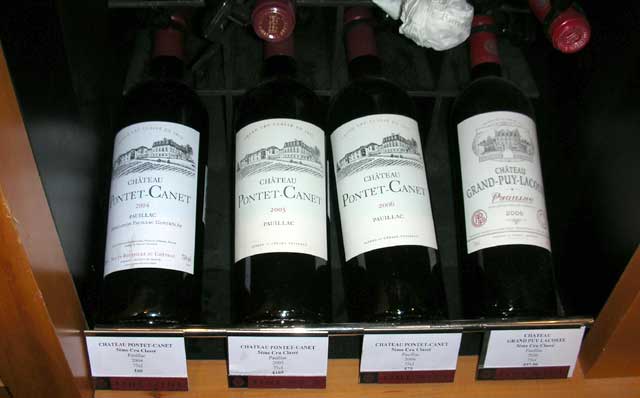 There is, of course, much more to marvel at. For instance, there is a bottle of 2000 Mouton-Rothschild for exactly £1000. If you think that only older French reds sell for these outrageous price, you might want to look at the 2005 vintage of Château Petrus - a bargain for £5000. If you want it a little older and cheaper, maybe you will be interested in a 1961 Château La Mission Haut-Brion for £3250? The list of expensive wines is of course much longer and also includes wines of more than 60 years of age and other precious vinous gems. All for a price, of course.

Now, do not mistake me. I am not really slagging off Harrods for selling wine at these prices; some wines are just insanely expensive, no matter where you buy them. The 2005 Petrus has received high praise from wine critics all over the world, so it is no wonder that the price of a wine of which only a few thousand cases have been produced sky-rockets (having said that, the Antique Wine Company are currently offering it for £2549 per bottle). Harrods do of course have to sell such wines as that is what you would expect here. Perhaps it is this catering for expectations that I found boring. For instance, I do not know very much about Italian wine, apart from the fact that it is very diverse in terms of grapes, styles and, sadly, also quality. But if I had to name an outstanding and well known Italian winery it would be - Gaja.

And which Italian producer to I find at Harrods...? Well, if it were only a couple of bottles, that would be fine, but Gaja is almost dominating the Italian selection. 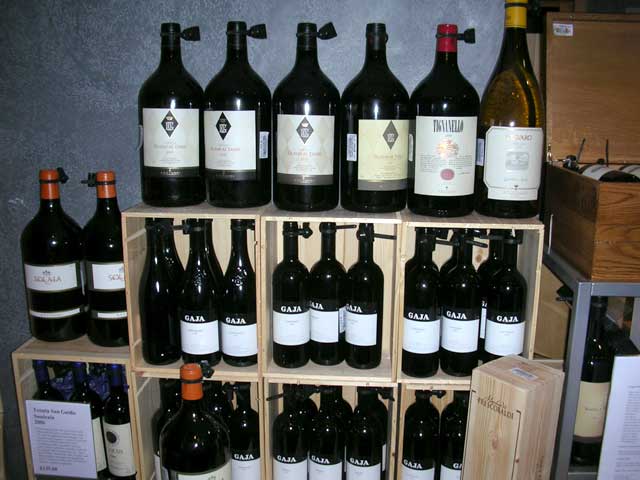 I had a similar reaction when looking at other countries, be it New Zealand or the USA - too many producers I know of, even from countries I can hardly claim to know more than a few of the top wineries. The notable exception was South Africa, but then I do know not more about SA wines than that they seem to have improved quite a bit recently. Oh, and I do know that the Rothschilds do have a joint venture with one of the premier SA winemakers - what was its name again? Oh, wait, here it stands, a bottle of Rupert and Rothschild from the Friderickburg Estate... Again, no surprise here.

If it comes to going for the most well-known among the world's winemaking elite, Harrods do play it safe, and maybe that is not so bad if you cater for an audience, who, I suspect, at least to a certain extent put conspicuous consumption above quality and value.

Interestingly though, if it comes to Germany Harrods do not seem to be that interested in featuring the absolute top producers that have the most well known brands and most outrageous prices. In fact, the selection of German wine is disappointing. First of all you notice that while quite a few other countries do have their own sections, properly labelled and all, even South Africa does, Germany does not. And here it comes, the 'German' section: 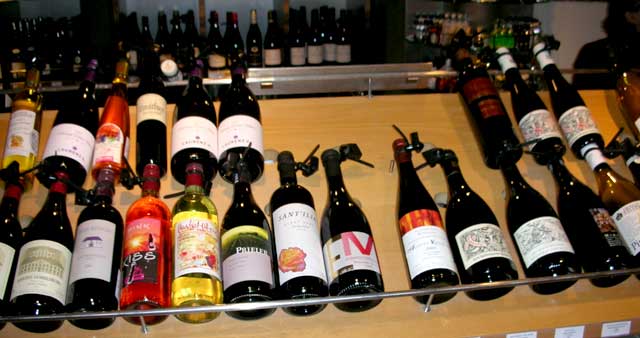 So let's have a closer look, shall we? First of all you notice that about a third of the German wine is actually Austrian (and a couple of bottles of Swiss wine too) - this may be why Harrods just did not bother do put a country label on the section, even though something like 'Central Europe' (maybe with one or two Hungarian wines?) would have been quite helpful to guide customers. Leaving that aside, the Wine Rambler likes Austrian wine and it sort of became part of our mission to feature 'German language wine'. It does, however, mean that there is not much space left for the riches of Germany (and Austria), so it only comes down to a few bottles.

There is, for instance, a 2004 Weißer Burgunder (Pinot Blanc) from the well respected Bercher winery, a late harvest from the Burkheimer Feuerberg. The Wein Plus Guide rates this wine at 91 points and for £22.95 the price is not outrageous. There is also a Pinot Noir from Dr. Heger, an outstanding estate, selling for £31.95. Most of the German section seems to be dominated by Reichsrath von Buhl from the Pfalz (Palatinate). Harrods offer a 2007 and 2006 Spätburgunder (Pinot Noir) for £26.50 each, and there is also the 2006 Forster Jesuitengarten Riesling that sells at £36 - a bit too high if the rating of 82 points from Wein Plus is any indication; wine in that quality range you can buy from Germany, including shipment, for maybe £6 a bottle (if you believe that rating to be accurate, of course). And there is even more Reichsrath von Buhl: 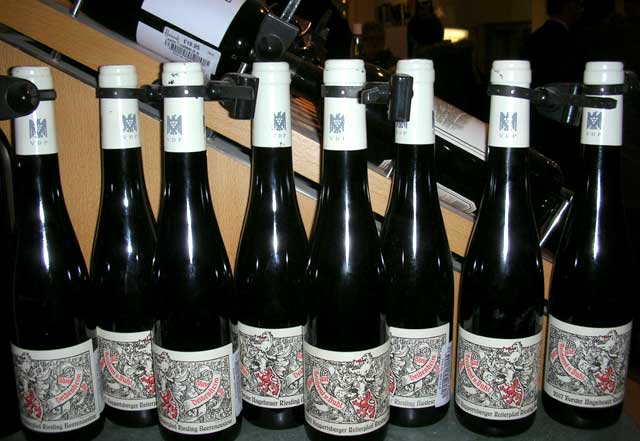 Buhl is certainly a winery with a reputation. However, can this be really all there is from Germany? Sure, the sweet wine selection features some German wines, for instance a 2003 Riesling Auslese by the Vollrads winery for £33.95 for half a litre, but a handful of wines from Germany is all there is? Not only are there so many outstanding German wines, there are also producers whose wines sell for hundreds, in some cases even thousands, of pounds at auctions, if that is what Harrods are after.

For me, the selection does not really work, or at least I do not understand the criteria. If you want state of the art wine from well known wineries at the price level to satisfy the Harrods audience, why leave out all the highly rated dry great growth Rieslings? If you feature Heger, why not have one or two of their great growth white wines or the top range of Pinot Noir, instead of the mid-range? Why leave out the names that British people might recognise, such as Dr. Loosen, if you are afraid they might not buy German wine they do not know? Or, if you are not afraid of selling wine from wineries that your customers might not know, why not go for excellent value at lower prices (no offence to Heger and Bercher, I think their wine is good value) from less know wineries? I am just at a loss about how this was put together.

Somewhat disappointed that I was not allowed to pray at the holly shrine of German wine at Harrods - and being unwilling to spend the hundreds, or thousands, I would have had to to pray at the shrine of French wine - I moved on to have a prayer at another shrine in the basement; a place of quiet reflection about life, death and snobs - both the German wine snob and the general purpose snob: 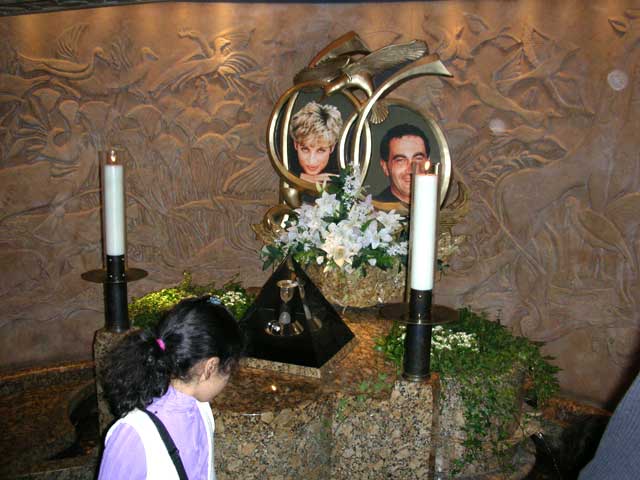 What a disappointing trip but

What a disappointing trip but I think that Harrods probably is more of a tourist destination then a true shopping venue. As you said, going to an independent wine merchant such as the Winery or another german wine specialist is probably the best thing to do if you want interesting and quality german wines.

In reply to What a disappointing trip but by TheWinesleuth

Well, it was not all bad - it is still a fun place to go to, but in a way more to watch than to really buy. So in that sense it does work as a tourist attraction, as you say. It would also work for people who want to get a sample of some of the world's top wineries without being too bothered about the price.

For a top selection of German wine I would turn to other places though. Having said that, the wines from Heger and Bercher I would not hesitate to recommend; but there is so much more. As you say, independent wine merchants are worth checking out - or going directly to the source to buy in Germany. It seems that at some point next year I should write a blog post about how to do that - it is fun, gives a much better choice and it also saves money.