I am sitting at home, drinking beer. Gillian Welch sings of "Tennessee". The computer post-processes photos. It could be a normal evening at the Wine Rambler's London HQ, if it had not become rather unusual for me to drink beer at home. And rather unusual is also the beer that I am drinking - a beer that, at an age when many wines have turned to vinegar, is still more than drinkable. 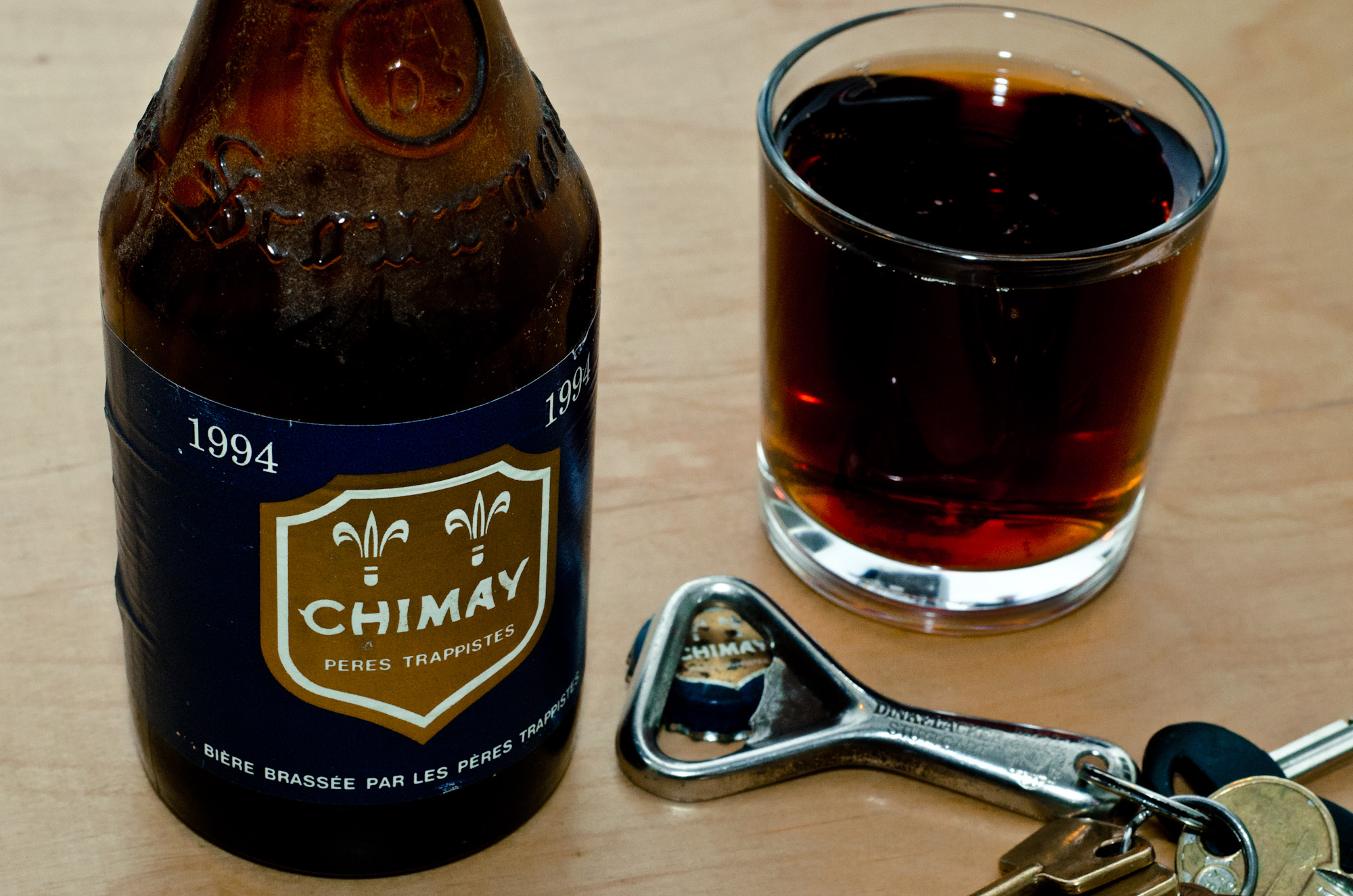 In fact, there are two stories fermented into this 1994 Chimay. And both are stories of loss.

The first story is a Wine Rambler story, and it is the story of how I got hold of this beer. Almost two years ago I discovered that my (then) colleague Mike is a beer connoisseur. To the extent that Mike busy unusual beers and ages them - not just for months but for years, decades even. After that discovery, Mike became a regular guest at the Wine Rambler and always brought unusual things to taste. Among the delicacies was the famous tasting of Chimay from 1991-2009. These beer tastings would have become a regular Wine Rambler column, I am sure, if fate had not lured Mike away to the Netherlands.

Among his parting gifts was this half bottle of 1994 Chimay Bleue - at 9% ABV this is the classic Chimay and, as we found at the tastings, ages very well for at least ten years. My Chimay is actually quite bubbly, although most of the tiny bubbles have disappeared as I write this. How does it smell? Quite interesting actually: aromas of liquorice and caramel, coffee grounds and chocolate cherry blend with fermenting apple and the mouldy, dusty smell of an old paper folder that was left in a wet cellar for too long. Compared to some other Chimays I had it is not in your face with fruit, rather more sophisticated, creamy and fresh, with an acidic touch. As I pour the last bits into the glass there is a fizzling sound, following by my tongue tingling from the freshness and acidity. At first it is a little sharp, but then layers of creaminess soften that impression, ending in a finish that melds caramel and yeast. It is creamy, it is fresh, it shows the first few signs of moving to the unpleasant side of age - but damn it still drinks better than most beers I get served in an English pub. As we get to the second loss, good ol' Gillian Welch has moved on to the glorious "The Way It Goes":

Now the yeast kicks in. There is something special about yeast and beer. And for that we have to go back a few years to understand why I have mostly stopped drinking beer at home (leaving aside my duty as Wine Rambler to report about German wine of course). In the olden days of my Munich life there was lager. It was good lager, from traditional Munich breweries, and we drank lots of it. So much so that it was not unusual to have a bottle opener as key ring - I still use the one that my first girlfriend gave me. For some reason it is from Stuttgart, where I was born.

Gilliam Welch, btw, has now started singing "I'll fly away", supported by the great David Rawlings. And fly away is what I did, to a country that makes really tasty ale but where most lager is, as one of my Munich friends put it, so bad "I would not wash my bicycle with". So I have mostly stopped drinking lager. Back to Munich though. To supply the thirsty Bavarians with beer, Munich has a lot of breweries, and some of the larger ones are still located in the city centre. This means that during many a good night when I cycled through the city very late to make my way home from friends living in the west I crossed a zone that, with the wind being right, smelled of yeast and fermenting beer. It always was a pleasant smell, a smell of home. Three o'clock at night, the streets mostly empty, the city still warm from a hot summer's day - and the smell of yeast. A classy aroma full of flavour, not the cheap smell of Carling, sweat and old pub carpets. And there is something in the depth of flavour of this Chimay that reminds me a lot of the yeast of Munich. Sometimes, I really miss it.

A Wine Rambler beer tasting: Belgian Trappists, plum beer and a chocolate beer dessert
A vertical tasting of Belgian beers: Chimay 1991-2009
Another night of Belgian (and other) specialty beers
Drinking the leftovers: aged Chimay beer, 1995 vintage ale and the strongest lager in the world