A while ago, I attended one of the commercial wine fairs that hit downtown Munich a couple of times a year. Like the times before, the elitist in me wasn't sure if it would be worth the time, because, to be completely honest, there are many second- and third-rank producers at these gatherings. In the end though, that is precisely why I eventually did go and had a look around. What is going on among the rank-and-file wineries is, I find, more indicative of the wider trends and directions the wine world is taking than the elite estates, who are in a league of their own anyway and always march to their own beat to some extent. 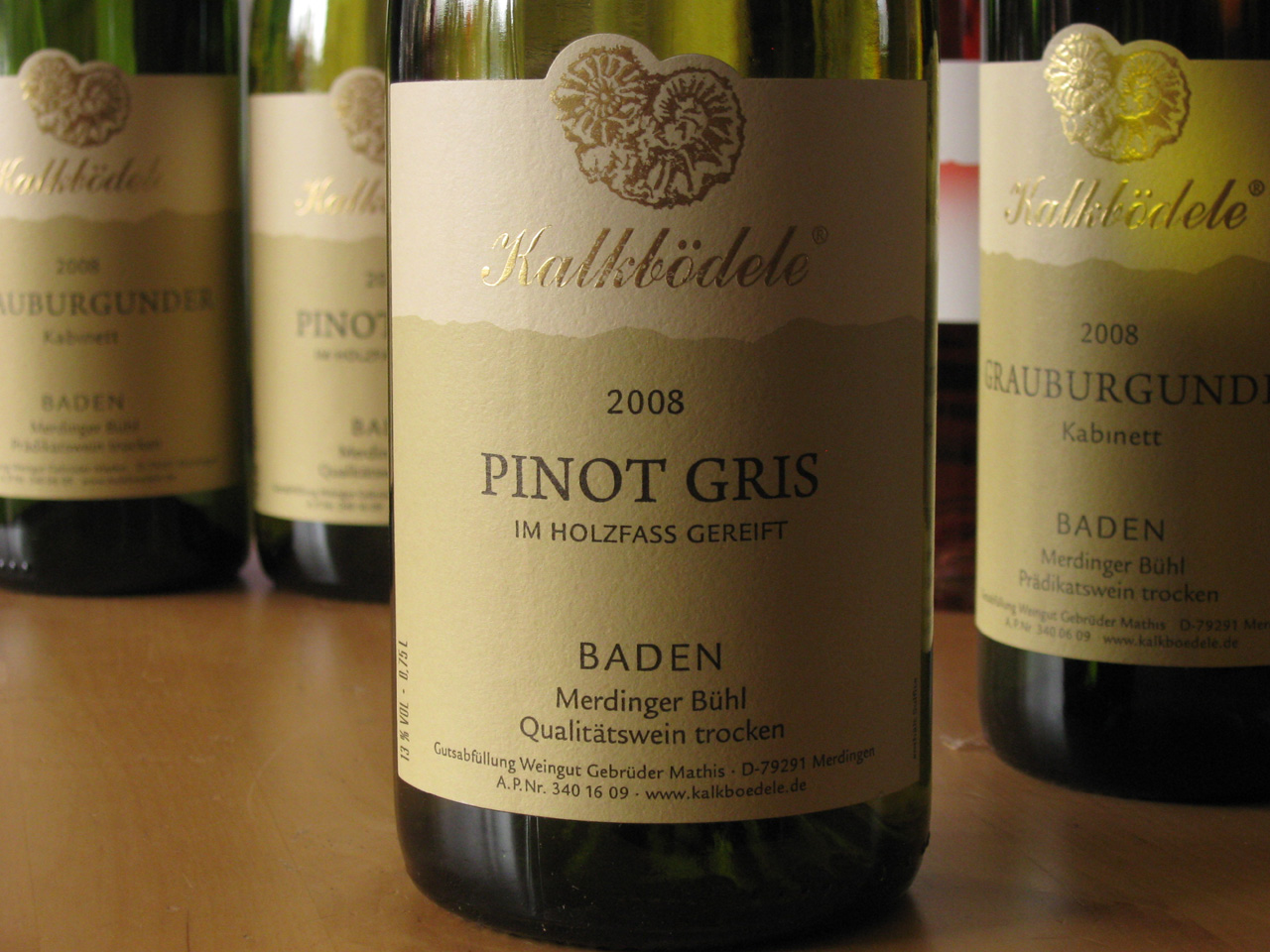 While braving the dense throngs of tasters - these events are notoriously busy - , browsing the winery leaflets and tasting the odd glass, I chanced upon the Kalkbödele winery of Baden's Tuniberg region, and was persuaded to try both their Grauburgunder and their Pinot Gris. Yes, that's right, two versions of the same grape. The naming, I was informed, indeed indicates the two different styles that they were aiming for. What was going on here?

Something quite typical for german wine in general, I would argue. At the danger of lapsing into cliché, but when you ask a french winemaker why this or that wine tastes as it does, you will most likely hear one of three things: "Because that is the way it is supposed to taste like", "because that is how my father used to make it, and my grandfather before that" or "that is simply the wine's terroir speaking". A german producer, on the other hand, will explain himself and his wines in so many words: "We tried this but it didn't quite work, now we're trying this other approach", "we've analysed our soil structure, and this grape variety could work, so we're giving it a go", "natural yeasts, yes, we're experimenting", "we've had some success with this, we're still a bit doubtful about that". This is not a difference in national character, of course, and it also has little to do with the actual state of wine-making and its objective merits. It is much more, I think, about the perception of wine as a part of national culture. In France, winemaking is a treasured national heritage that is believed to thrive as long as it is done in accordance with the time-honoured traditions of its glory days. German wine, on the other hand, has been on the defensive in its own country for so long that it is always seen as reforming, self-improving, on the move to a new kind of quality, new customers, somewhere else. I like this more probing, self-conscious, and ultimately also more open-minded and curious approach that you find in german producers. I think it has been made to work productively for us consumers in diversifying the range of wine styles on offer.

The little under-the-radar subregion of Baden that I'm reporting on today and what is probably its foremost producer, the nicely named Kalkbödele (little limestone floor) winery are indeed a good example of this. The Tuniberg (pronounced toon-ee-berg) is situated south of Freiburg and forever in the shadow of its more imposing neighbour to the north, the Kaiserstuhl. On this rather bucolic stretch of gently rising hillside, Pinots Gris, Blanc and Noir are grown predominantly. Prices are moderate compared to better known Kaiserstuhl estates, and wines can be anything from basic to ambitious.

Speaking of which, I think you've been waiting just about long enough for the bit about the actual wines. I'll start with the more original 2008 Merdinger Bühl Pinot Gris, which was matured in oak barrels, taking aim both at alsatian and new world versions of the grape: Straw-coloured, with a nose of ripe pears, candied fruit and beeswax, this wine is dominated by the tension between the oak flavours on the one hand and the very robust acidity on the other. The focus of the fruit seems to get lost a bit between the two, resulting in a somewhat muddied palate and a slightly awkward kind of complexity. Still, a very decent and somewhat original white.

The Grauburgunder from the same vineyard and the same year is the more traditional, unoaked, "german" version: It shared the prominent acidity, but worked it more straightforwardly into a lighter, less complex wine. Here, green apple and unripe melon rule the day, with clear, if not endlessly deep fruit on the palate. In its acidity-driven straightforwardness, this is reminiscent of a good Pfalz Riesling, without quite managing the minerality part. I preferred this latter version at this moment in time, because it seemed more refreshing and drinkable to me and for the completely subjective reason that it works wonderfully with a supermarket food favourite of mine, Flammkuchen.

To sum up, two wines that are very likeable and respectably made, but in the end are more notable for the the general direction they indicate than for being great wines in their own right. Last but not least, I'd like to draw your attention to Simon Jones's prior coverage of the winery on his Blackpool to Basel blog. Simon has the clear advantage of residing in the area and is always knowledgeable on wines from this corner of the country.

Do Kalkbödele actually explain the concept to their customers? I just wonder if there is any way for a customer in a wine shop to understand the concept behind the two names? Obviously, some will just assume that the wines are made from two grape varieties and others will have a suspicion, but I am curious how well thought through the concept is...

In reply to Grauburgunder / Pinot Gris by torsten

That's hard to say, because I was a tipsily chatty customer at their stand, and they were happy to keep me supplied with wine and shop talk. I'm not sure how much good educational labels would do, on the other hand, because people might be used to those having a high bullshit factor. If you're used to ignoring things like "a full-bodied, fruity red. Drink with pasta, meat or cheese", you might also then ignore more informative labelling.

In reply to Hard to say by Julian

That's a good point. Also, it

That's a good point. Also, it would obviously only work well if you had both bottles in front of you as a difference needs to be explained in relation to "the other". At least in Germany it seems to me that the quality producers are very reluctant to add any descriptions to the back labels, and probably for exactly the reason you just described.