Two rosés from the languedoc, both predominantly Syrah, with some Grenache, Cinsault and Carignan, one from Paul Mas, via Jacques Weindepot, around 5 €, the other from Olivier Jullien, via K & U, around 12 €.

Up went the brown paper, professionally applied and stylishly decorated by my lovely assistant, who deserves very special mention. Those sharp of eye and quick of wit will quickly see which is which, but for 24 hours, I had no way of knowing. You can follow the links any time you get bored. 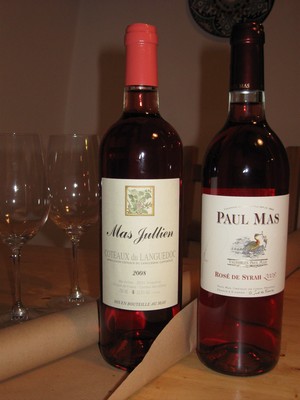 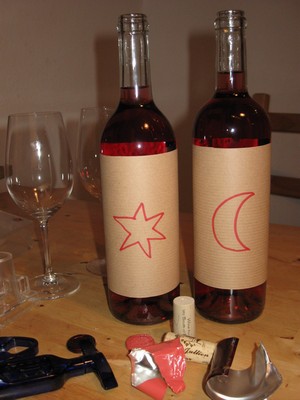 Colour: No difference, other than that Star was a hair darker. Smell: Both have roses, raspberries, but while Star reminds me of a bag of drops, with more exotic, but also more artificial fruit aromas, a
Moon was fresher, more "natural", red and black currants thrown in, green leafy notes. Taste: Star smoother, rounder, Moon with more of a kick, more length, and more spice, but quite tart in its after-taste. But that's rather exaggerating the differences, and also writing with hindsight.

So, not really a lot to go on on the first day: While Star's key issue was artificial fruit, Moon's was a certain rough edge of tannic, even somewhat animal greenness - so much so that the assistant suggested "Katjes vs. catpiss" as a headline for this post ("Much too Mas" was another).

On the second day, things had got murkier: Moon's nose had lost much fruit and become tight and withdrawn, while Star had got rid of its artificiality and had now much more to offer there. In the mouth, Moon retained its lead in spiciness and kick, while Star's smoothness now seem somewhat hollow. Completely confused as to which I should think of as the "better" wine, I could only stick to my first impression from the day before: K & U would never tolerate a wine that smelled even a little fake-fruity, so, whatever else I thought I had tasted, Moon must be the Mas Jullien.

Then, one last quickening of the pulse, off comes the brown paper, and - follow the links now, If you haven't already. But I'm not fooling myself: It could as easily have turned out the other way, as there was not a world of difference in style or in quality.