Tasting: France vs California and Bottle Shock at the Clapham Picturehouse

Thursday evening we ventured to the Clapham Picturehouse to see a movie about wine. And to drink some, of course. The movie is Bottle Shock and it features the (in)famous 1976 Paris wine tasting during which the French wine elite was defeated by the products of the (then) newcomers from California. To re-enact the Judgement of Paris, the cinema offered eight wines, four each from France and California, and the movie ticket for £22. So off we went!

I have to admit that I did not expect much of the tasting. While you can of course get reasonably priced wines from both California and France, the prices for the more prestigious wines can be astronomical. Even without expecting a Chateau Mouton Rothschild, I was not sure what the Picturehouse could do for that price - a weekday movie ticket sells for £8.50. However, they did manage to surprise me, both in the positive and the negative.

The positive: Instead of going for the cheaper option the selection of wines did not only include a few of the better known names, it also certainly was not from the cheap range. There was, for instance, the Calera Chardonnay 2006 Central Coast that sells for about £15 in the UK or a 2002 Chateau Tour Pibran Pauillac in a similar price range. The negative: Out of the eight wines, you were only allowed to taste four. I found this highly irritating, especially as you were required to keep a piece of paper with you so that they could tick off the ones you had already tried. Some of the staff were really suspicious about it and one even implied that we were trying to cheat to get another taster. Together with too much noise and heat but not enough space in the bar and people continually bumping into me this did not create an atmosphere in which to enjoy the wines properly. The atmosphere was not unfriendly as such, but I felt the wines and we were lacking space. 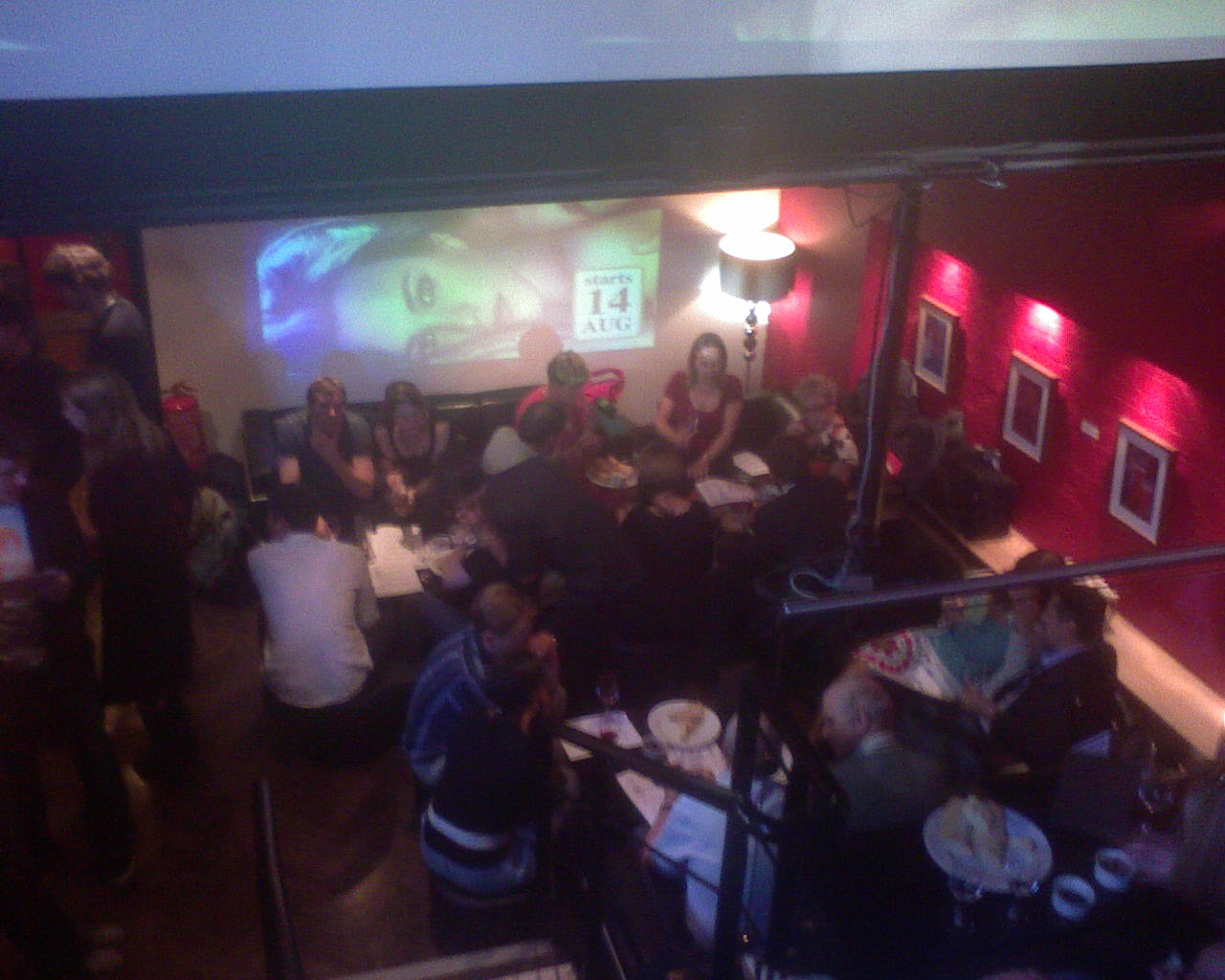 Between the two of us, we did manage to taste all eight wines, so here is a quick report. When reading this please keep in mind what I said above about not feeling 100% comfortable in the setting and that a somewhat congested nose and the intense popcorn smell made it even harder to do the wines justice – I feel I am too critical here.

We started of with a 2007 Menetou-Salon, a Sauvignon Blanc from the Loire. The colour was not very exciting, but the wine seemed like a reasonably good crowd pleaser, very zingy and fresh, easy to drink, perhaps a little bitter finish. It was described as 'intense, minerally, and very fruity', which it was, unless you think of a good Riesling that would have blown it out of the water in all these categories. Next came Sonoma County with a 2007 Dry Creek Fumé Blanc that had a little more character and better colour too. The nose was a little like kiwi-suntan mixed with other tropical fruit and while there was some kiwi in the mouth too it somehow reminded me of rote Grütze mit Vanillesauce, a German red fruit jelly with vanilla custard. There was also a nice level of zinginess. While the dry Creek was more interesting it also had less harmony than the Menetou-Salon and neither excited me.

Moving on to the more serious whites, we tried a Michelot Meursault 2005, a wine that with all its 'nutty toasted oak' was very good at masking itself as a light sherry. Seriously, it tasted exactly like sherry. The last white was the above-mentioned Calera Chardonnay. A classic Chardonnay, it is creamy, rich, well-structured – and also quite strong with 14.90% alcohol. I think it would have needed more space and food, because under the circumstances it felt too heavy and the popcorn-smell around me made it hard to pick up the fruity elements that would have balanced the serious oak-character. A wine with class, but I could not appreciate it there and then.

While you could argue that the Californians won this tasting, none of the wines excited me enough to want another glass – we were allowed to choose one glass to take into the cinema with us, which did somewhat make up for only being allowed to taste four out of eight. I would have preferred to be allowed to taste all and then pay for the favourite. But now to the reds.

We started with two Pinots, a 2006 Nicolas Potel Cotes de Nuit and a 2006 Morgan Santa Lucia 12 Clones Pinot Noir. The French wine had a really nice nose with cherries and liquorice, while the Santa Lucia featured more earthy notes with leather and spice. In the mouth, Burgundy continued the more fruity approach, add some strawberries, but had a little too much tannin for my taste; nevertheless easy to drink and enjoyable in its fruitiness, perhaps almost too pleasant. The Santa Lucia was a bit more forceful in the mouth, medium-bodied and generally more on the roasted woodland-side of things. This made it more interesting to me at first, but overall the Burgundy had a smoother balance.

Eventually, the more serious Cabernets. The LMB Napa Valley Cabernet Sauvignon 2005 seemed like the classic example of a really really fruity US Cabernet with the typical oak flavour of the style that excites the international market. It was not bland in any way, just not my style. Think of a silk boxing glove with Mike Tyson-fruit punch. The three year older Château Tour Pibran was more on the earthy side, less fruity, more layers of taste; in fact, the cedar/woodland and tobacco aromas were almost stronger than the fruit, at least together with the tannin. I did not really come to a conclusion about these two as, by the time, I just wanted to get out for a few minutes.

In the end, I did not take any wine with me to see Bottle Shock because none of them seemed like my kind of film companion (but then I never drink anything in a cinema anyway). Overall, it was easy enough to decide who had won the tasting: the red wines defeated the whites as every single one of the whites had an element we were not too excited about. Having said that, if I had to buy one of these wines it would be the Calera Chardonnay as I think, despite 15% alcohol, it could be good with the right kind of food. While I liked all the reds fine, I could think of several wines in a similar price range that I would prefer.

And on to the review of Bottle Shock.