Following the success of our recent beer tasting, host Mike returned with a selection of unusual beers. This time he brought, amongst other delicacies, four vintages of the same beer: 2009, 2003, 2001 and 1991 of the Grande Réserve from Chimay, a brewery run by Belgian Trappist monks. Our mission was to run a purely scientific experiment on how well this beer would age and what we thought was the optimum age to drink it at. For this mission, a crack team was assembled at the Wine Rambler's South London headquarters, their eyes on only one goal: 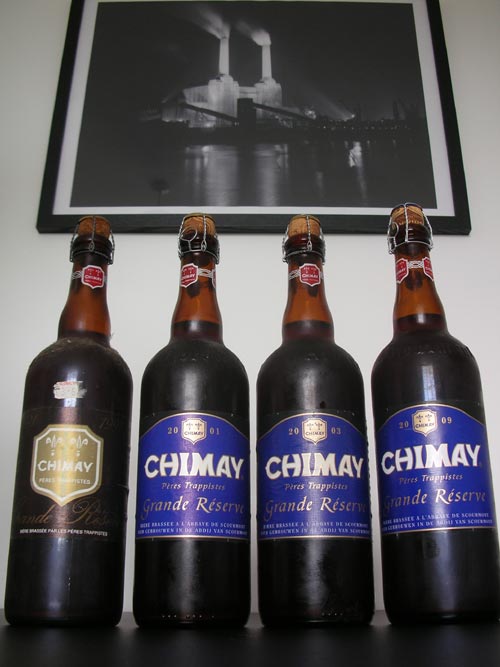 Before we get into the details of how this mission went, some background information. Mike, photographer extraordinaire, is collecting beers in pretty much the same way as the Wine Rambler goes after wine - just with the key difference that he has been at this for a little longer than we. So his cellars contain a few precious treasures that he is kind enough to share with us. Before I met Mike I had of course heard of beers that could be stored for a few years, but I certainly was not aware that some can also be stored for decades and might even improve in the process.

Mike demonstrated that with a 1994 vintage of Hardy's Vintage Ale, our starter for the night. At the time of bottling, this beer clocked in a serious 12% alcohol, so God only knows whether it is now at 14% or perhaps even a little higher.

The Hardy's may very well have been the rarest beer I have ever tried, seeing as the Dorchester based brewery has been closed a few years ago and has only ever produced small batches of this beer anyway. Eldrige Pope started brewing Hardy's in 1968 as a serious beer, matured in oak casks and designed to improve with age. In fact, the label states that they expect it to age well for around 25 years. In that sense, our sample bottle was still young, almost.

So what do you get from a 16 year old beer from Dorchester? First of all raisins. The nose was dominated by raisins and/or sultanas, soaked in brandy perhaps, and a distinct maltiness. And look at the colour: 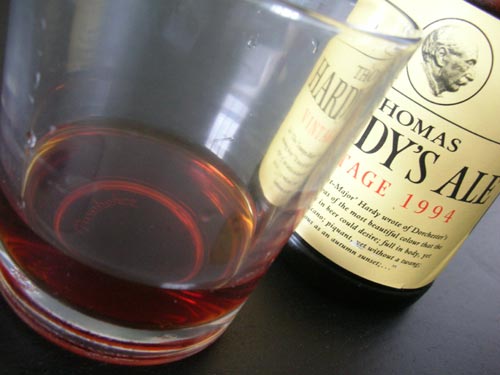 The texture was a little sirupy, with a taste that was somewhere between a good Brandy and a beer. There also were elements of the taste of a herbal cough mixture, with a finish that had sweet and spicy elements. While the beer did not taste very alcoholic, you could still feel its power. One to be enjoyed by the sip, I would say. 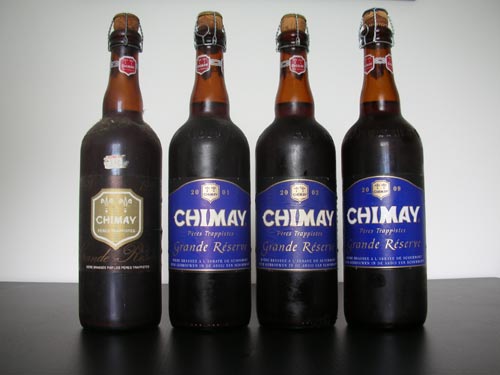 After our little starter, we moved on to the main course. Four bottles of Chimay, or rather only three - our crack unit had been dramatically decimated by some members being hit by a stomach bug and other unforeseen encounters, so we decided we were not brave enough to take on the four massive bottles of Chimay; instead we just went for three of them - more to come later, of course! 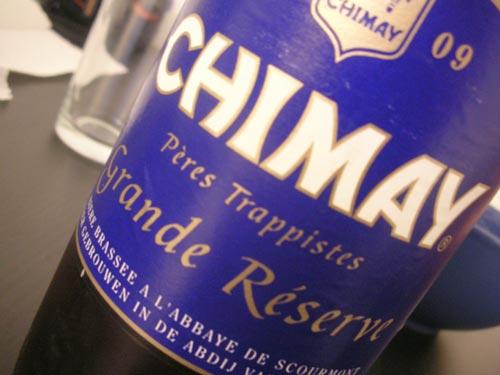 We started with the 2009 vintage of the Grande Réserve, the most substantial beer made by the Trappists in Chimay. The bouquet was not very strong at first, in fact much less intense than we expected. Tom rightly said it smelled a bit like an old English pub, including a somewhat 'uriny' component. What it did show off very well though were aromas of caramel and malt, all with a fresh touch of sour fruit. 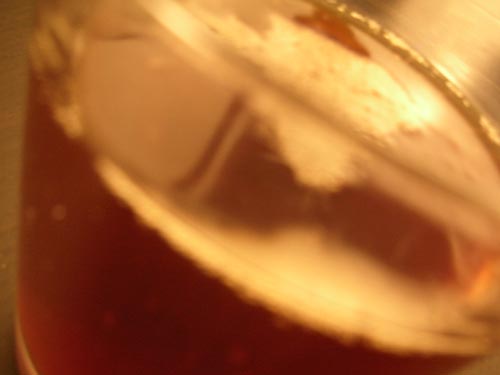 Despite the 9% alcohol content, the Chimay was very refreshing to drink; substantial, yes, but also a little sweet with good fizz. It seemed to us to be a great beer to drink outside during the summer. Hops, fizz, a touch of caramel and liquorice and a fairly long finish that kept tingling our gums. No doubt a very good beer.

Thus refreshed, we moved on to the 2003, which greeted us with a much more distinct bouquet: a nose of furniture polish and cherries, with a touch of yeast and milk that was just about to go off. In case you did not get it from this description: it smelled gorgeous. 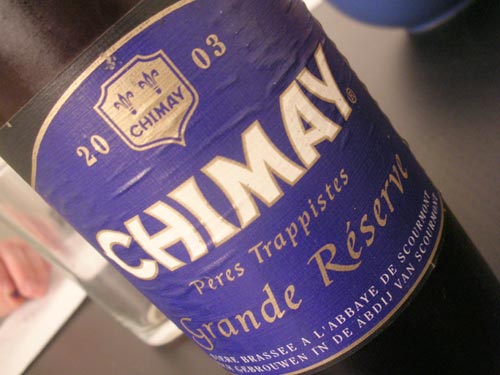 The 2003 was a lot less fizzy than the '09, and it also felt drier on the tongue and more robust. Flavours of chocolate had come out, with the bitter-sour of the younger beer fading out a little - still fresh though. The long finish ended with tobacco and cocoa flavours, a bit like the topping of tiramisu. More food friendly than the 09, the older Chimay appeared to be more like a drink to have in, with food, perhaps even cheese. It was very well balanced and just a joy to drink, no doubt one of the best beers I have ever tasted. 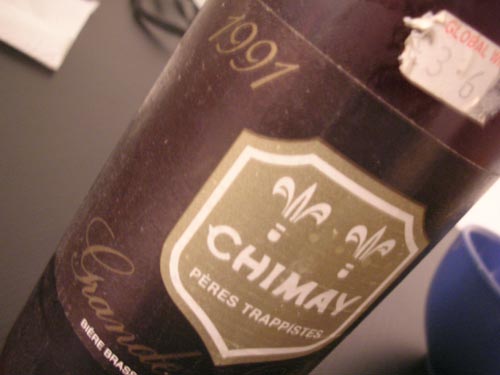 Next came the 1991. The colour was much lighter than with the other two Chimays. And the bouquet was something different too. It had some of the off-milk of the '03 and also something of the fresh aromas of the '09, but mostly it smelled like proper sour apple cider with a splash of nail varnish remover.

On the tongue it was all cider with lots and lots of apple acidity and some Stilton. 'Very different' was Tom's first reaction. If I had not know better, I would have sworn that this was a cider, it was so very sour. Chocolate and cherries were still there somewhere, but mostly hidden. This beer, no doubt about it, had gone too far.

Was it just stored too long or did it go off? More likely the latter - after all the '96 we had at the previous beer tasting was absolutely fine and had nothing of the sourness.

Despite the sour issue with the '91, I continue to be impressed how well these beers age. After all, not that many wines improve with seven years of bottle-ageing and only a few make it to ten years or more. Again, this was both an education and a great entertainment. Mike promised to come back with more, so watch this space!

not ideal for an upset stomach!

I am so sorry I missed this but beers tasting like "Stilton", "milk" and "nail polish remover" would have not been ideal for my upset stomach!
Sounds great though nand hope to be able to make the next round!

In reply to not ideal for an upset stomach! by Vale

Re: not ideal for an upset stomach!

It was a shame you could not make it, but there will be another one! Hope you get better soon.

In reply to Re: not ideal for an upset stomach! by torsten

We will be narrowing the

We will be narrowing the vertical tasting to either side of 10 years next time and there are still other beers to try, including a 12% larger!

Drinking the leftovers: aged Chimay beer, 1995 vintage ale and the strongest lager in the world
Old yet fresh - drinking 1994 Chimay Trappist beer and thinking of old times
A Wine Rambler beer tasting: Belgian Trappists, plum beer and a chocolate beer dessert
Another night of Belgian (and other) specialty beers