It was always about food. I am not saying you cannot, should not have wine without food (quite the opposite), but without my love for food there would be no Wine Rambler. The crucial moment was a Friday afternoon, years ago, when I decided to open a random bottle of Mosel Riesling with some mildly spicy Asian food because I had heard the two go together - resulting in my first moment of true wine excitement and the decision to track down the wine and learn more about it. Wine and food have been with me since and put me on the slippery slope to wine blogging. Considering that it is surprising that it has taken me so long to organise the first Wine Rambler dinner...

...but when it finally happened I made up for the delay by organising it in style, with the help of the fabulous team of Trinity Restaurant in Clapham - and five German wines.

Since I first stepped into the restaurant at Easter 2007, Trinity has become my "local". In all those years I never had a mediocre meal coming out of Adam Byatt's kitchen, and I have seen the food become even more refined without ever being too complicated. Equally important is the friendly service that creates a lively yet relaxed atmosphere - and the love for wine that the Trinity team and I share.

The idea for the Wine Rambler dinner was to pair Trinity's food and atmosphere with five German wines - and ten guests. I picked the wine and left it to Trinity's manager Leah and head chef Graham to come up with food suggestions. In the end they effectively created three menus - vegetarian, pescetarian and carnivore. Instead of making this a public event I invited the guests myself, partly because I wanted to share the evening with friends but also to bring together a mix of people with different interests in wine - including wine trade, enthusiasts and novices. This keeps the professionals from descending too deeply into wine geek talk and also reminds us enthusiasts that many concepts of the wine world we take for granted mean nothing to the customers we are trying to reach out to.

For the dinner I picked five German wines, with a view to cover both the expected and unexpected. Two of the wines were sparklers - partly because I currently long for something refreshing but also because of how important fizz is for Germany: it is the world's largest market for sparkling wine and consumes over 400 million bottles a year. It is also the second largest producer of fizz, although most comes from just a handful of industrial-scale producers and is rather cheap stuff. Only a tiny percentage of the production is attributed to artisan winemakers but even that still surpasses the whole English production in quantity. 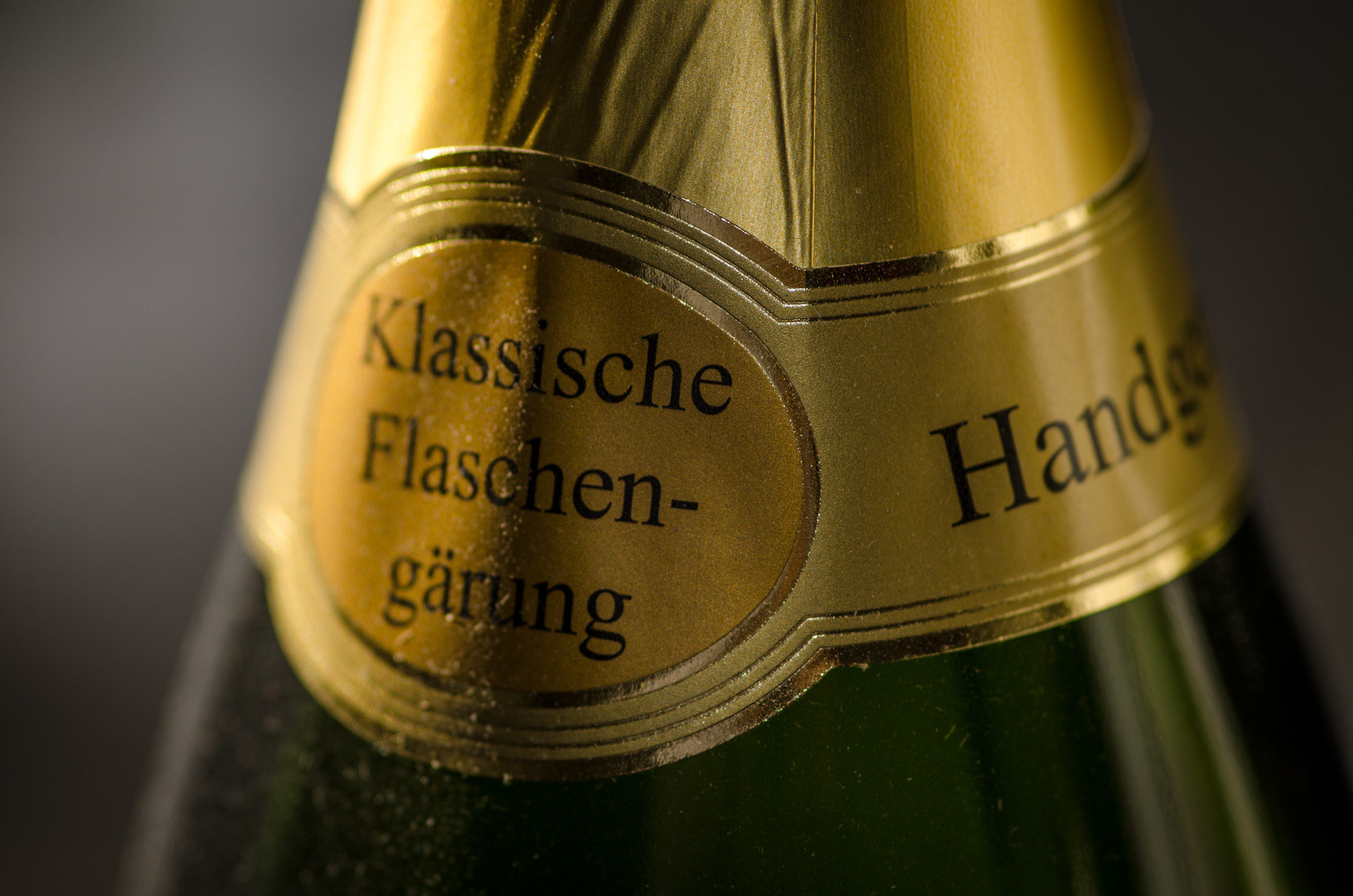 Germany's signature sparkling wine is Rieslingsekt, fizz made exclusively from Riesling grapes. Even though good producers use the same method employed for Champagne these wines tend to be more crisp and lively than their Chardonnay or Pinot brethren. I picked Josef Rosch's 2008 Riesling brut, a Mosel sparkler that combines freshness with the depth and complexity associated with Champagne. It also shows its Riesling roots, at moments feeling more like a still wine, which makes for a very interesting mix; and a good companion for our Tunworth fritter, radish and smoked chickpea canapé.

After this refreshment we went for one of Trinity's signature dishes - pigs trotters. Trotters may not sound like something you'd ever want to come close to, even less eat perhaps, but I can assure you it is very tasty; our alternative dish was chilled soup of broad bean, black olive and lemon. These dishes were paired with a wine from one of my favourite producers, Peter Jakob Kühn. The Rheingau proponent of terroir and biodynamic winemaking has created some of the most exciting and complex Rieslings I have ever tried. Riesling is very versatile with food and it is not unusual to pair it with pork - and with our expectation of an intense, acidity-driven wine we thought it would be substantial enough to stand up to the trotters.

However, to me the combination of Riesling and trotters was perhaps the least successful pairing of the evening. Kühn's 2008 "St Nikolaus" is an accomplished wine with layers of complexity and just about the right age, but it packed less of a punch than I'd expected; it is a more contemplative than vibrant Riesling. Had it not been for the acidity and matching flavours of the gribiche it would have been overshadowed by the trotters; it did go nicely with the soup though.

Interestingly, my first thought when looking at the menu had been to pair the Riesling with the scallop dish that came next. Tasting the last sip of Riesling with the scallop I found that the food and wine flavours (herbal in particular) connected well and the strength of wine and scallop was evenly balanced, so perhaps I should have switched these wines around. We discussed this at the table but while there was consensus on scallop with Riesling we couldn't quite agree whether the third wine would have been better with the trotters (food and wine matching always has a personal component). That third wine may sound a little unusual - a Mosel Pinot Noir, and a sparkling one. Riesling specialist Reinhard Löwenstein makes some exciting Blanc de Noirs, a Pinot Noir made in Champagne style. This particular specimen has a somewhat serious note that lightens up when its acidity combines with food. I am convinced it would have stood up to and matched the trotters with its combination of depth, substance and acidity. I did not have a chance to taste them together but I was told the Blanc de Noirs also went well with the warm salad of Jersey Royals, courgette flower and basil that the vegetarian crowd enjoyed.

The most unusual wine of the night was paired with the, in some ways, most unusual dish. When I told the Trinity team I would bring a German Syrah to the table that stylistically would be lighter than its French siblings they suggested to pair it with fish, a new lamb dish that Graham was experimenting on and gnocchi. Fish with red wine may sound like a violation of the fundamental wine matching law, but depending on the fish and especially the sauce it can work beautifully. Graham decided to go with baked stone bass (a more substantial relative of the sea bass), served with scallop-filled courgette flower, crab and samphire. I went for the lamb option but I stole a fork or two of the fish and the salty samphire in particular balanced very nicely with the spicy flavours of the Syrah.

The fish and Syrah went so well that I would say there was more harmony in that pairing then I got with the lamb, mostly because the sweetbread was much more prominent than the tender, lovely saddle and might have benefited from a somewhat stronger red wine. I really enjoyed the individual components of the dish but felt that with a little tweaking it could be made more harmonious. However, another dinner commented that this was the first time in his life he really enjoyed lamb (as he has had my seven hour slow roast lamb shoulder before I should probably be a little cross, but the saddle of lamb was delicious).

It was nice to see that everyone enjoyed the Syrah - a grape that is still relatively rare in Germany. Our Syrah was made by Baden winemaker Ziereisen, his 2008 Gestad, a great combination of the lighter elegance of German Pinot Noir with the more intense characteristics of a French Syrah. If you ever visit sun-kissed Baden in the south west of Germany I recommend visiting Ziereisens who are as welcoming as outspoken (there is another story here about the German wine classification, but I will leave that for another day). 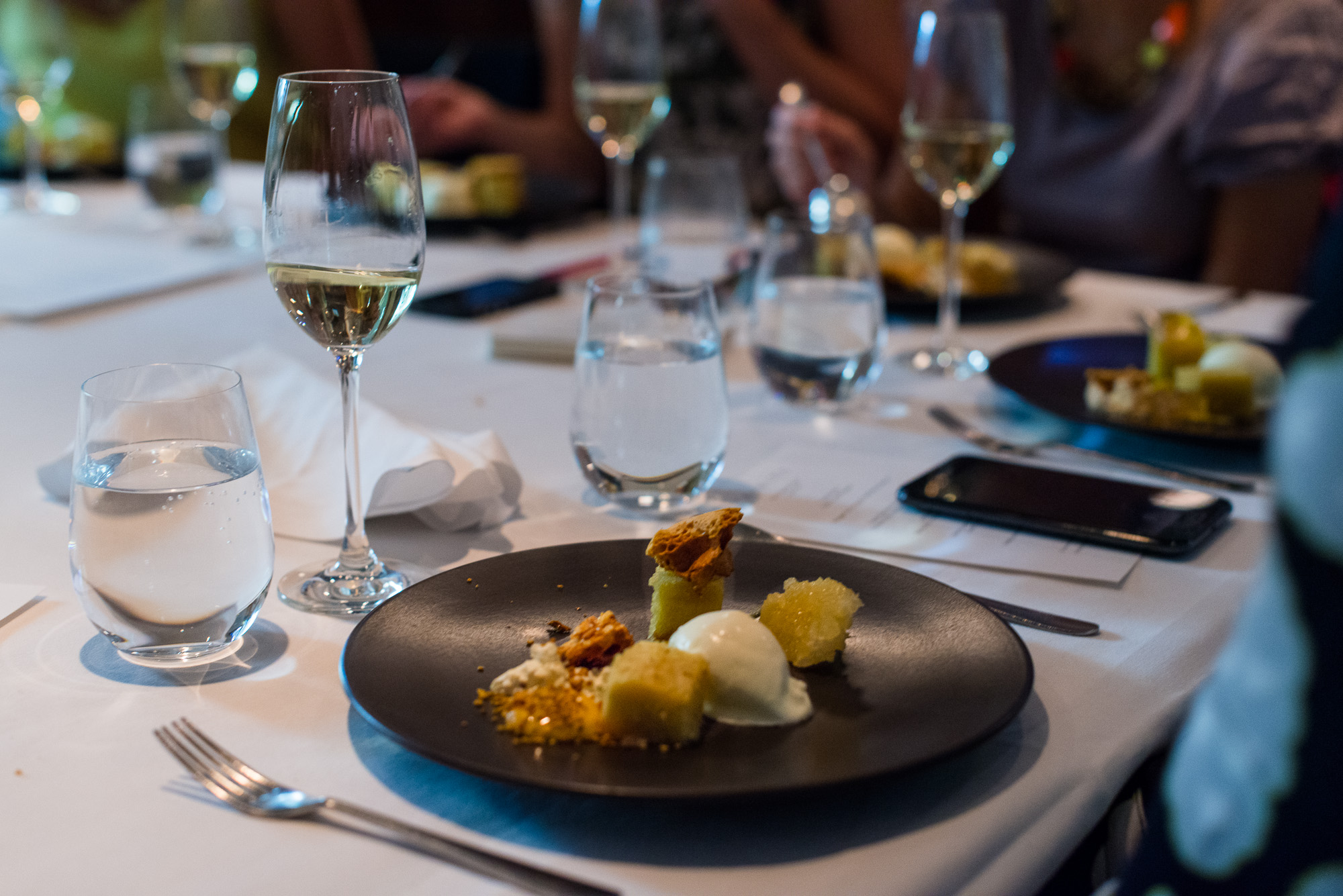 After the main course it was time to get to the wine everyone would expect to see at a German wine dinner - a sweet Riesling. Instead of going to the obvious Mosel region I went for Rheinhessen where Philipp Wittmann has built up a reputation as one of Germany's best winemakers, mostly with his dry Riesling. Even though sweet Riesling is often labelled as dessert wine I find that not necessarily true because the acidity of Riesling keeps the wine relatively light and fresh, and even some of the sweeter Auslesen, especially with some age, are elegant, sophisticated and versatile enough that you can even pair them with a main course. 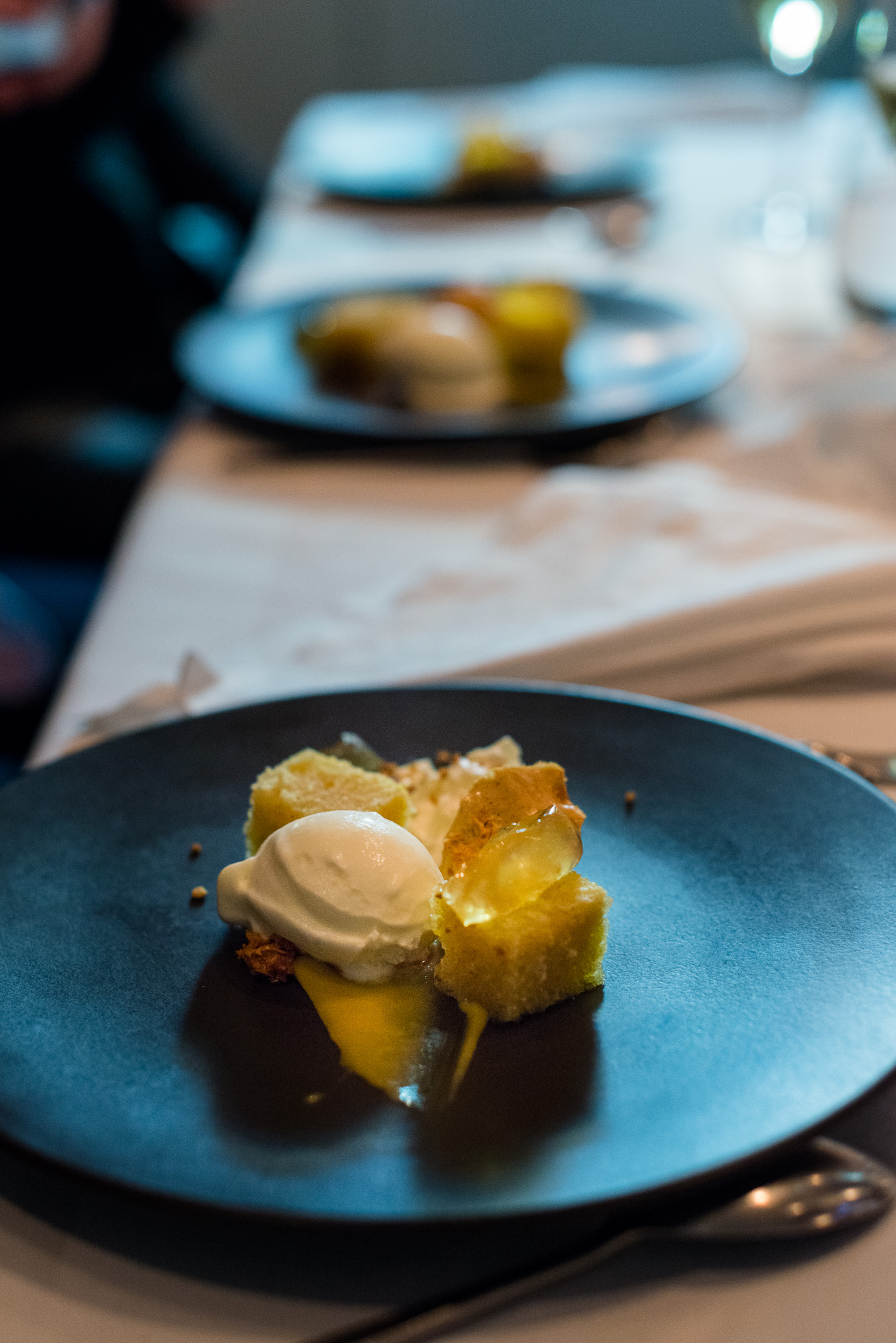 To match the Riesling - Witmmann's "basic" Auslese 2012 - Graham went for a somewhat lighter dessert with fresh, lemony flavours, a pairing that worked quite well and left the honeycomb-fans in particular with, as a friend put it, an elegant sufficiency.

In the end everything came together in a highly enjoyable, tasty and relaxed evening - with my only two regrets being that I wasn't bold enough to suggest pairing the trotters and the Blanc de Noirs, and that my co-Rambler Julian could not join us. Maybe he will make it for the next one - and maybe we will even see some of you there!

I would like to thank my guests for joining me on this adventure and the Trinity team for hosting us - in particular the fantastic Leah for handling the logistics and coming in on what would have been her day off to look after us. A special thank you to Mike, who donated some of the pictures he took that night (for simplicity's sake just assume the mediocre ones are mine; also, please don't think the photos do the food justice - these are just a few quick snapshots taken under real restaurant conditions). And apologies to everyone for the delay in putting this online, the dinner took place in June after all, but I have been very busy and abroad for most of July.

Anyway, food, wine and friends - a pairing not to miss, even if it cannot always be German wine...