Last Friday, the London branch of the Wine Rambler assembled a crack team of wine lovers and socialites from half a dozen countries for a particular mission: take down eight bottles of wine. The team members were selected following the ancient wisdom of Brigadier General Gavin from A Bridge too far: I need a man with very special qualities to lead. He's got to be tough enough to do it and he's got to be experienced enough to do it. Plus one more thing. He's got to be dumb enough to do it... Start getting ready. Gavin knew what he was speaking of, after all he knew the enemy from first hand combat experience; and the enemy was/is German: 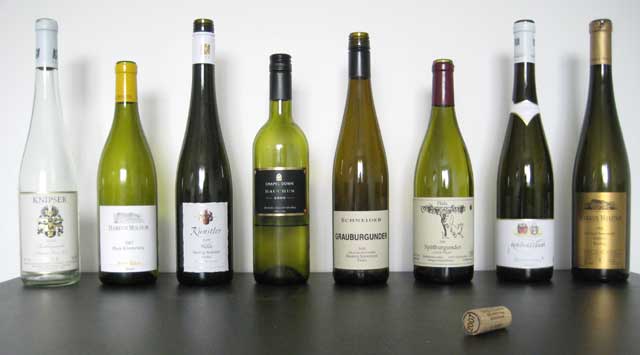 As it was a warm summer day, we started with the rosé, a 2006 Blanc de Pinot Noir by Knipser, a winery in the Pfalz that was just recently awarded the title as vintner of the year by Gault Millau. However, our crack team did not really much care about this as they were mightily confused by the wine's pale colour. Actually, both in terms of colour and taste it was felt that this rosé came very close to a white - a nice and very refreshing white with a few rougher edges perhaps, that give the wine a good balance.

Leaving the Pfalz behind we moved to the Mosel region, to taste a 2007 Pinot Blanc made by Markus Molitor. Despite the wine being labelled as dry, the team felt it was very fruity and an argument broke out whether it were the honeydew melon or nivea hand cream notes that gave the nose of this wine a somewhat (too?) perfumed aroma.

Next came the blind tasting part. All the team knew was that they would taste two wines from the same vintage (2008) that were similarly priced (about ten quid each) and that were marketed as having some similarities - mostly crisp and refreshing with some mineral. Both wines were indeed somewhat similar, very fresh with noticeable fruit (despite being dry) and elderflower as a special link between both. However, while the first wine was really enjoyed and praised for being lively, fresh and elegantly fruity, the second wine fell somewhat flat, missing both the depth and elegance - despite being perfectly drinkable and very refreshing. After the jury cast the, unanimous vote, it was revealed that the winner was the Hochheimer Hölle, Riesling Kabinett trocken 2008, made by German winemaker Künstler, while the looser was, ta-ta, an English wine, the Chapel Down Bacchus 2008.

After all this fruit and lightness, we felt something dry was needed to set things in focus again, and we moved on to a Pinot Gris/Grigio from the Pfalz, Markus Schneider's Grauburgunder 2008 - a wine that was particularly enjoyed by the lovers of dry wine for its crispness and focus.

The reds were represented by a 2006 Pinot Noir by Friedrich Becker, a Pinot specialist from the Pfalz. Again, it was a colour surprise attack that caught our team off guard first - Becker's Pinot Noir was much darker than our international jury expected from a German Pinot. Despite this there was agreement that the wine had all the necessary and delicious ingredients of a Spätburgunder, mixing cherries with pepper, bread and surprisingly smooth tannins.

Leaving the Pfalz behind we moved back to the Mosel area, to indulge ourselves in a late harvest Riesling made by Theo Haart, the Piesporter Goldtröpfchen Spätlese, 2007. Praised by everyone for its elegance, even those jury members who are not too keen on Riesling or sweeter wines, the Haart evaporated very soon.

This forced us to open another bottle of fruity gold, Markus Molitor's Zeltinger Sonnenuhr, Riesling Spätlese 2006. While the Haart was elegant and light, Molitor finished our evening off with a more concentrated sweetness.

We learned quite a few things during this evening. One lesson was that wine expectations can be deceiving - I would imagine that during a full blind tasting (also blindfolded) most of us might have mistaken the rosé for a white wine. Another lesson was that it seems to be very difficult to agree whether a wine can actually smell of nivea hand lotion - and if so, which wine it was (the Pinot Blanc or the Künstler Riesling). One member of our team who was quite sceptical of sweeter wines learned that some of them can be much more enjoyable than you might expect - she loved the Haart, but the Molitor was too much for her. One of the German members of the jury realised that there actually is some drinkable German red (a lesson that will not be a surprise for regular readers of this website).

Obviously, the evening also had winners and losers.

The Pinot Blanc did not find too many friends, partly because the nose was too perfumed for some of us; one member of the jury loved it though and a re-tasting three days later showed that the wine became much more agreeable with the perfume notes receding. However, this was not the wine that we ranked lowest - that honour goes to the Chapel Down, a wine that we felt lacked depth and was just too expensive for what it was, especially when compared to the delightful Riesling by Künstler. The Pinot Noir was very much liked by everyone, perhaps not so much for being truly great but for its very nice balance. It was the wine that disappeared second-fastest. The wine that was gone within just a few minutes, however, was also the unanimous favourite of the jury, the Haart Riesling: elegant, fruity (without being too sweet), well balanced and rounded it was the winner. As long as you do not count all of us the winner for having a great and relaxed evening, of course.

As a Brit, I would like to say that I think the Chapel Down was a little overshadowed by her mighty German opponent. Given different circumstances I think she would have faired a quite a bit better. Of the few English wines I’ve tasted this is the best so far.

I too liked the Pinot Blanc and would happily try it again, maybe with some white fish.

My favorite of the evening was the Künstler, as the floral and fruitiness was just delicious.

I would also like to add, we learned during the evening that one member of our crack team is into the taste of envelopes, and the Markus Molitor's Zeltinger Sonnenuhr reminded her of them- she must have very tasty envelopes.

In reply to My pennies worth by Caroline

Thanks for reminding me of the envelope, I had almost forgotten about that!

I agree that the Chapel Down would have faired better against another opponent - but I guess that that is exactly my point: if you charge around £10 for a bottle of refreshing white wine then you are competing against the Kabinett wines of the likes of Künstler, Haart, Dönnhoff, and, of course, against a range of other winemakers from Spain to Chile. So the question is: if I had ten quid to spend on wine, would I go for the Chapel Down? In my case the answer is a no. If they charged 3 quid less, we could talk - although even then I would probably prefer one of the Dr Loosen Rieslings that Sainsbury sells for about 6.50. Having said that I agree, this was the best English wine I have had so far.

Wow, quite an epic tasting ("Did I ever tell you kids about the night we took on 8 german wines?") . Wish I could have been there.