First of all let me say that not only was this a proper blind tasting, I also brought two neutral judges along to help me avoid any appearance of bias. The wines were chosen carefully to be a good match, as usually in a Wine Rambler Blind Tasting Madness. Both cost roughly the same (the Australian was, if you consider it was bought in the UK with its higher taxes, perhaps a tiny bit more expensive), are off-dry and around 11% alcohol by volume. Even more importantly, it was the Australians who had actually called for this battle by stating on the label: "This early picked Riesling is loosely based on the German "Kabinett" style." Well then, gentlemen, unscrew your screw caps and a clean fight please!

Something about smelling the first wine made me think it might be the Australian - there was a substantial, green aroma that I cannot really describe well, but tend to associate with Australia, in a totally useless generalisation. Either way, we found a great Riesling bouquet with rubbery aromas, almost like plastic-y tennis balls, and some petrol and dust. Wine #1 also had a lovely dusty smokiness to it and apple and grapefruit aromas. A little rough and yet still charming it was not bad at all.
The taste of #1 was a good reflection of its bouquet - there were rubbery flavours (think bicycle tube, although I have yet to eat one) and green fruit, with juicy but also more serious moments. I particularly liked the mix of lychee flowers, spice and nectarine (not of the overly ripe type though), and there was a long, dry aftertaste with crunchy texture. Off-dry, yes, but good substance too.

When we moved on to Riesling #2, "elegant" was my first reaction - a nicely blended nose of lovely fruit, mineral, cool herbs and a little creaminess. The creaminess, in fact, reminded one of my friends of a mandarin scented body lotion she apparently uses, whereas I thought more of creamy peach. And then there were lovely spices and some grapefruit. Especially the peach and herb aromatic made me even more certain that #1 would be the Australian.
Elegant is also a good way to describe the feeling of Riesling #2 on the tongue, where it is almost like a dancer. A feast of fruit (mostly stone fruit) with lots of fresh acidity, very crunchy mineral and a lovely caramel orange peel candy mineral finish that ends almost salty. 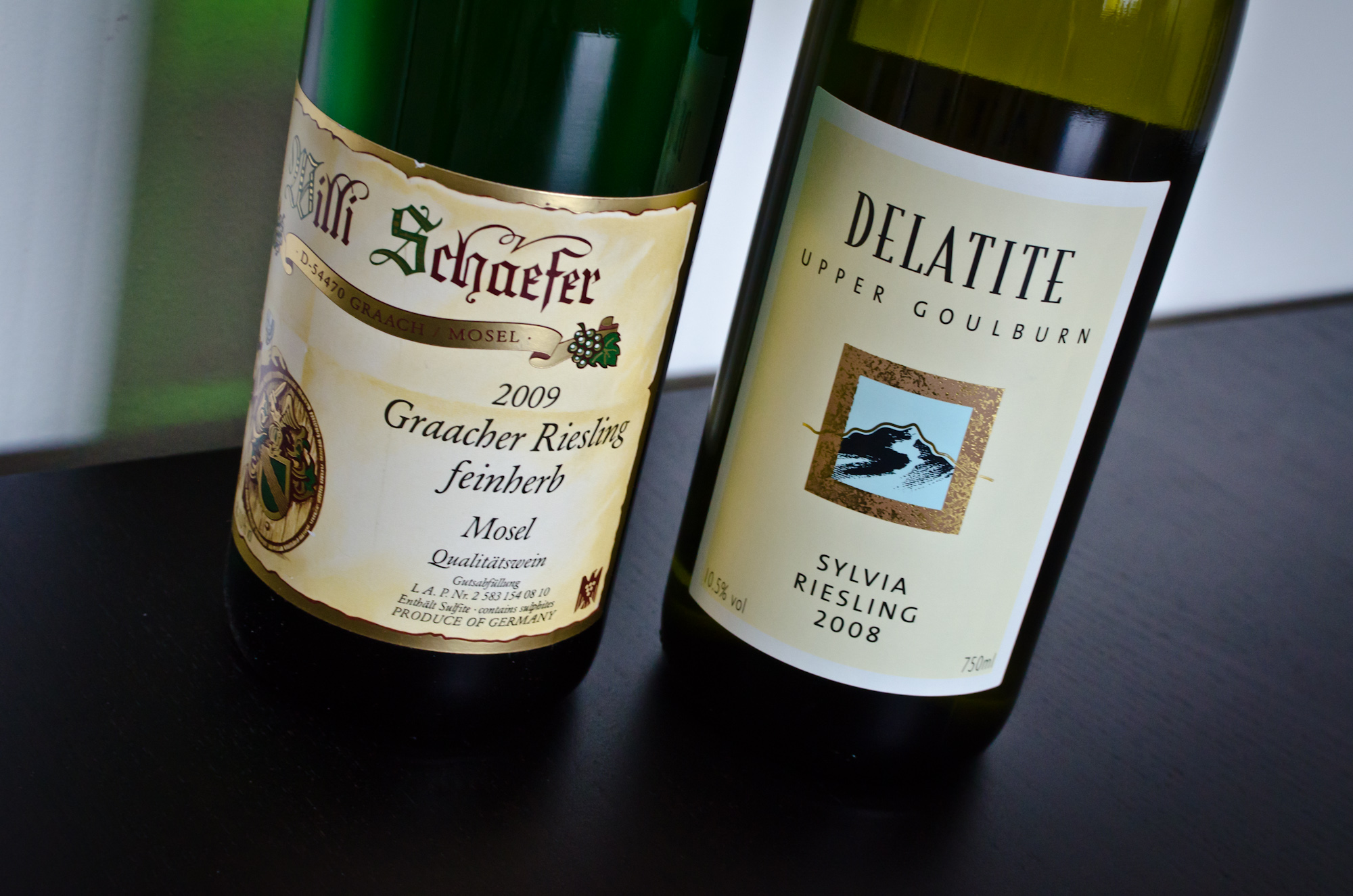 Two good Rieslings were standing in front of us, no doubt, and while we all had our personal favourites this was mostly on personal taste and not based on quality. #2 was a little sweeter, had more pronounced acidity, more upfront fruit, especially peach, and lovely crunchy acidity. #1, however, was a little rougher, edgier and a little more serious.

Based on my preferences on the day my favourite was #1, the Delatite, Sylvia Riesling, 2008. On the second day when I enjoyed the last drops from both bottles, I found that I liked Willi Schaefer's Graacher Riesling feinherb 2009 better for its elegance.

Leaving aside a certain pride about how easy I found it to tell which one was which (we shall not mention previous occasions where I was completely wrong), the most important lesson from this blind tasting was not a lesson, but a very enjoyable evening amongst friends, with Germany and Australia coming together in harmony.

Nice post. As you say, dry Riesling is what we do well here in Australia, but there is currently a lot of experimentation with off-dry styles, inspired by the great Rieslings of Germany. Good to hear that Delatite put in a good showing.

In reply to Nice post. As you say, dry by Red

Thank you for your comment and sharing your knowledge about Australian wines. Pretty much all Australian Rieslings (including some terrific ones) I have come across very dry, so it was an interesting experience. Australian Riesling is definitely an area I would like to explore more.