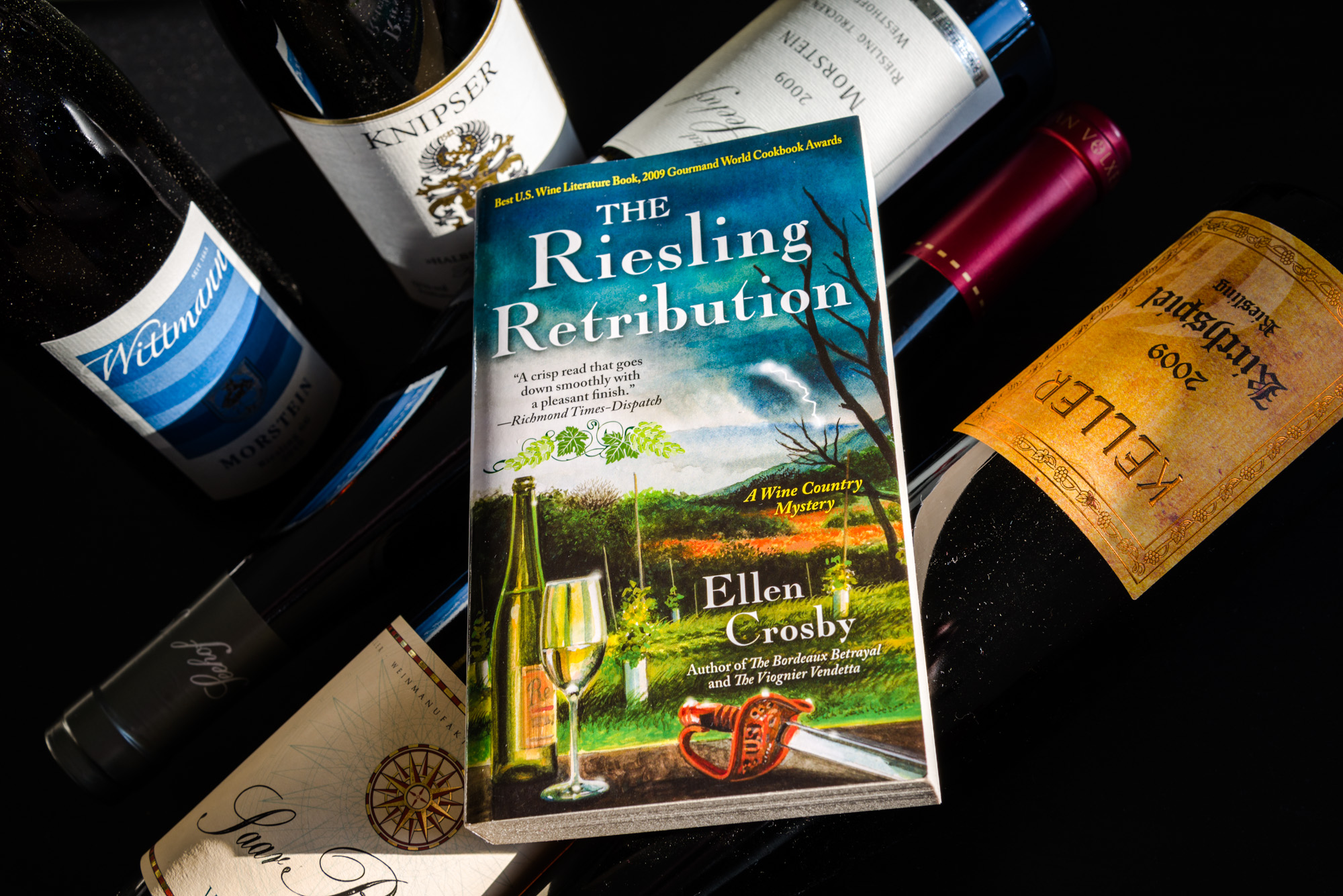 When I randomly discovered what may be the only Riesling crime novel in existence I had no choice but to buy a copy of The Riesling Retribution. As the book is set in "Virginia's lush wine country" I took it with me on a recent business trip to nearby Washington D.C. and to my surprise I found reading it more enjoyable than I had expected.

For the Retribution Ellen Crosby draws on a range of classic themes - to the extent that one wonders whether she has actually left any cozy mystery cliché out at all. First of all we have a body discovered near a vineyard. The unwilling detective is Lucie, the owner of Montgomery Estate Vineyard, who wants to find the murderer to protect the reputation of her family. This is because the prime suspect is Lucie's late father, a man of dubious character who had means, motive and opportunity. In order to solve the mystery Lucie has to uncover the truth about her family's "buried secrets" and come to terms with her own life.
This brings us to the love triangle between Lucie, her macho winemaker Quinn and the newly arrived, charming farm manager Chance. This unresolved situation not only confuses our heroine but also gets the estate into trouble when strange incidents threaten the harvest. As if all of this was not enough Lucie also has to deal with her brother who is falling into bankruptcy by trying to satisfy the luxurious cravings of his wife. Add to that other sub-plots and story elements involving a reenactment of a Civil War battle at the vineyard, a dubious building tycoon, a lover spurned, friendships in danger and ghost stories as well as stereotypical characters such as the inevitable gossipmonger in the local dinner, spice it with the unmasking of a dangerous criminal and you have all your major clichés covered.

And yet I found the book read more pleasantly than this summary suggests. This is mostly due to the plausible and detailed setting. The environment is described well and key actors such as police and news act within context and even some of the clichéd characters do not seem to be out of place. Crosby, it turns out, lives in Virginia and during her career as a journalist has worked as a regional feature writer for the Washington Post, so we can assume that her experience in this area has shaped many of the positive aspects of the book. Perhaps more importantly from a Wine Rambler point of view, viticulture and winemaking are well described, as is the context in which the estate operates, from investment decisions to planting new vines or having to work with illegal workers for the harvest. For the curious there is also an appendix that gives more detail about Riesling. Overall the pacing of the story is (mostly, and we come to that in a moment) not too bad and so I found myself almost caring for Lucie's little wine mystery world.

The writing does mostly not get in the way of the story but I found it hard to be impressed by sentences like: "Last night's tension still hung between us like a fog." (242) Some of the descriptions are falling into the cliché trap, for instance when the face of a detective is described as having "settled into the heavyset demeanour of someone who has seen too much evil and cruelty in his work and understands the burden of keeping that knowledge locked away from the rest of us." (31) Another example is the description of a deputy from the sheriff's office (26): "Mathis was a gray-haired African American built like a football linebacker, with eyes that looked like they could pin me to a wall, metaphorically speaking." Had she not told us, we would of course have assumed Crosby meant it literally, especially as two pages later we see how Mathis uses his eyes for clever interrogation: "'An old family feud maybe? Ever hear anyone talk about something like that? How about any skeletons in the closet?' He smiled with his eyes as he peeled off his gloves, but if there had been a wall, I would have been pinned to it." Those aspects could have done with a little editorial polishing.

Sadly this is particularly true for the grand finale. Suddenly what had seemed like one of the sub-plots turns into a major drama involving attempted murder, an abduction, another attempted murder and a dramatic chase, almost completely taking over the main story line. This is too much, too fast and too heavy, especially as other plot elements are resolved in just a few sentences thrown in at the end. Within the cozy mystery genre you may have to accept an overuse of clichéd situations but the end left, excuse the pun, a bad aftertaste, like a Chardonnay overwhelmed by too much oak.

Is The Riesling Retribution a must-read? - no. Might it amuse fans of cosy mysteries or wine nerds? - probably. Could you also just spend the money on a good Riesling? - definitely. Even so I enjoyed it but then it is hard to imagine I would not.

p.s. It appears Crosby has published one wine country mystery every year since 2006, and other titles include: The Merlot Murders; The Chardonnay Charade; or The Sauvignon Secret. If I can make suggestions for the 2012 or 2013 books, how about: The Muscadet Massacre; The Tempranillo Torture; The Silvaner Strangler; The Huxelrebe Homicide; or The Carignan Conspiracy.

I like the Muscadet Massacre. Set in late-1950s or early 1960s-France, with a crouchy Jean Gabin and a young Belmondo. And a mysterious short-hair girl between the two.

Yes, alliterative titles are tacky. The Tempranillo Torture however deliciously recalls my own modest studies of the Spanish Inquisition (Whom nobody ever expects...) and the suitable employ of overused old barrique barrels (sold away here in the regions for 50 Euros) as a sort of, wellllll, not-quite-repose furniture. A must for every well-equipped dungeon.

Well, it seems that cozy will only get us so far. Can I suggest the Silvaner Silencing, a terrifying piece of social criticism-cum-murder mystery? Mass homicide, political corruption, general decay and a depressed, Silvaner-sipping private detective, fresh off the Swedish presses.