A study in scarlet: the mystery of a 25 year old Silvaner wine

Some wines are good, some wines are bad, some are exceptional. And then there are the wines that are special because they have a story to tell. When I discovered today's wine on the shelves of London wine shop The Winery I was already certain that I was looking at a wine with a story. What I did not know was that this Franconian gem would be willing to share it with us.

Maybe we start with the question of why we got so interested in a dusty old bottle with a funny purple cap. Well, for starters because it was just that, a dusty old bottle with an unusual purple cap. It did not only look old-fashioned, it also was quite old, almost twenty-five years old, in fact. Aged wine is always an adventure - sometimes even a gamble on whether you have waited too long or just caught it at the right time. Under the label good ol' boys we have so far only looked at aged red wines and Riesling, the white variety that probably has the best potential for ageing. And here we were, starring at a twenty-five year old Silvaner, the signature grape of the German wine region of Franken (Franconia, about two hours north of Munich).

We have been championing this often underrated variety for a while, but we never had the change to try a really old Silvaner.

Colour is one indicator of the age of a wine. While red wines get lighter over time, the colour of white wine becomes more intense during a process called maderization (an effect of oxidisation). The Franconian Silvaner showed off a really intense, very clear gold that still had hints of green (which is said to be a sign of a younger wine). It certainly looked beautiful and also as if it could comfortably age a few years more. Now really excited, we uncorked the bottle. This was not so easy as the cork was enclosed in a rather unusual pink cap that was very robust. Below the protective cap we looked at, and sadly smelled, a mouldy and very stinky cork. After the cork came out, we put our greedy noses over the bottle, eager to catch the virgin bouquet. This we had better not done - boy did it stink. I have smelled rotten, mouldy things in the past, but this was quite something. A guaranty for a gag reflex deluxe. After half a second of desperation, we composed ourselves and carefully cleaned the bottle neck of all remainders of dust and mould. And then we poured and smelled the wine... 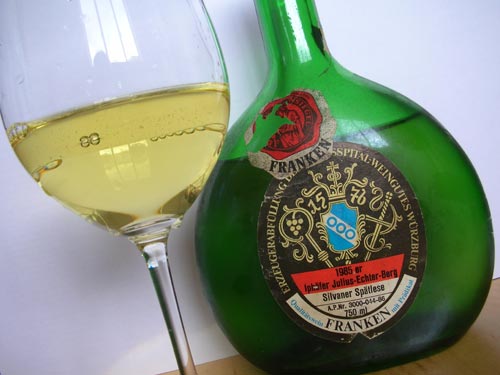 ...and we smelled, potato peel. But not just Joe Average potato peel. In fact, it was the exact smell of a potato wrapped in tin foil and forgotten in a barbecue fire for too long. The potato smell (which slowly faded into the background over the next few hours), was embedded in earthy, smoky aromas, all finely coated in caramel and sprinkled with herbs. After we got the mould smell-shock out of our systems, the Silvaner actually had a very pleasant nose, surprisingly even with a certain fresh feeling to it. A very unusual but also enticing bouquet. And now the taste. If you have tasted old Riesling you will now probably expect me to mention petrol notes, but that was not the case. Instead we got the, somewhat burned, potato peel again and also yet more smoky flavours. The Silvaner still had noticeable fruit, for instance ripe pear, and intense herbal notes. The latter were almost like herb candy, but not so intense as to be on the side of herbal cough syrup. The wine was creamy but also surprisingly fresh (considering the age) with well balanced acidity. It felt almost dry on the tongue, but there were signs that it had been more on the off-dry side when it was bottled. This was of course an educated guess as the label did not indicate whether it was dry or not, and it did also not say anything about the alcohol level. We guessed around 11%. We were absolutely certain though that the finish was really pleasant and creamy. We are also definitive that the Silvaner was a remarkable wine, a pleasure to drink and proof that Silvaner can age very well and produce outstanding wine. It did not really feel very old, more sophisticated and smooth, if you get the difference, and still very much alive. To honour the Silvaner, we decided to learn more about it. Under what circumstances was it made? Was it actually off-dry and around 11% alcohol? Did the producers expect it to last that long, did they even aim for that? This little study in scarlet (or rather in purple, from the very unusual cap) led us to Franconia, to the Juliusspital winery.

Juliusspital is an unusual winery. It goes back to the 16th century, when the Catholic bishop of Würzburg set up a hospital to look after the sick and endowed it with property and also a vineyard. Even today the profit from the winery is used to support the hospital. With over 170 ha Juliusspital is one of the largest wineries in Germany, and it also features a spectacular wine cellar that is around 250 meters long. Our wine, a late harvest Silvaner from the Iphöfer Julius-Echter-Berg vineyard, saw the light of birth in those old cellars. So it was those cellars we had to turn to in order to find out more about it - and Horst Kolesch, who manages the winery, was so kind to tell us a little story.

In a way, the story starts with a number. The Germans being a methodical people, we put numbers on every single bottle of wine. Our wine was numbered with the A.P.Nr. 3000-044-86. 'A.P.Nr.' stands for 'Amtliche Prüfnummer', or 'Official Test Number'. It is a unique identifier for every single wine (not the individual bottle though). So we sent this number to Juliusspital, and Herr Kolesch came back with the following story (summarised by the Wine Rambler): 1985 was a catastrophe for Franconian wine. The vines were hit by an exceptional frost period during the winter, with temperatures dropping to -28° C. Many vines were damaged badly and about 20% had to be uprooted completely. As a result the average production dropped to below 10 hl/ha. In a way this 'saved' the wine as, despite the following spring and summer being mediocre, the reduced yield led to a good quality.

'Our' wine was harvested between 24-28th October 1985, it had 91° Oechsle, 7.2 g/l acidity and 17 g/l residual sugar. And we were right with regards to the alcohol: 11%. We had also suspected that the Silvaner was more on the off-dry side, and while both acidity and residual sugar did no longer have a strong impact on the taste, we could still feel their presence and were grateful that they had preserved the wine so well over the years. But back to Herr Kolesch's story. Overall, the wines of 1985 developed well. Herr Kolesch emphasised that while Silvaner may not age quite as well as Riesling, it can still last a long time and impress with juiciness even at old age. He also said that late harvest and great growth Silvaner from Juliusspital had demonstrated in many tastings that they could age well. From trying this one wine the Wine Rambler agrees wholeheartedly.

Herr Kolesch could also shed some light on the unusual colour, shape and material of the cap that was so much shorter than any cap we had seen on a wine bottle. Juliusspital had used these old-fashioned caps for a long time, following on from the very old sealing-wax closures. The colour indicated the quality level of the wine: quality wine (red); Kabinett (light blue), late harvest/Spätlese (purple), Auslese, Beerenauslese and Trockenbeerenauslese (white). Eventually though, this older model had to make space for the more modern, standardised type of cap used today.

So, this is the story of the 1985 Juliusspital, Iphöfer Julius-Echter-Berg, Silvaner Spätlese, a wine I found by chance in a London wine shop. It was a pleasure to have made its acquaintance and we will continue to keep an eye out for these wines. Many thanks to the friendly people from Juliusspital and Herr Kolesch for taking the time to share this story with us. If you ever go to Franken, make sure to check out their cellars! I am certain that other wines with an interesting story are awaiting their discovery there...

I feel bad for all those who never got the chance to taste that fine old boy, and now have to make do with this story, even though it is - you won't mind me saying - one of our very best so far.

I've only just noticed the article on the 25-year-old sylvaner bought at The Winery in London. This bottle lay in my cellar with several others from the mid-1990s until I sold them to The Winery last year. There were originally a dozen or so. I can't remember where I bought them originally, but I do know that they were extremely cheap, having been written off as duds by the wine merchant. Over the years, whenever I opened one to taste it I could never get past the smell of potato peel, which to me was unappetising. So I'm thrilled to read that others have found so much pleasure in the wine and to discover its history.

In reply to Sylvaner by Bob Tyrer

And the story goes on

What a fantastic comment, thank you so much for sharing that, Bob. This has made the history of our mystery wine even better! And what a coincidence that you found our posting. May I ask how you came across this? Anyway, I was wondering where the Winery people had come across the wine after so many years, but as I haven't been since I bought I had no chance to ask them. I remember that they said something about buying them off someone, and it did not sound like it was another wine merchant...

Again, thanks for sharing that!