The other night I was having some Cabernet Blanc with my homies and - Cabernet What, I hear you say? You heard correctly, the wine is called Cabernet Blanc, a grape variety that is grown by just a few vintners in central and western Europe. The specimen whose label you see below comes from the Pfalz, one of my favourite German wine regions. 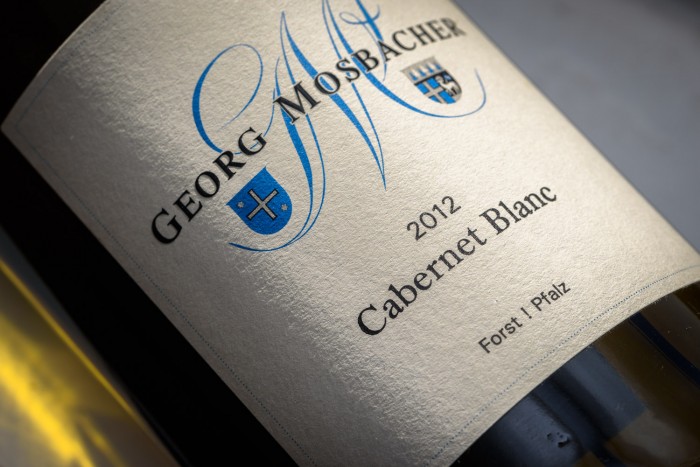 It was produced by the Mosbacher family who have been making wine in the village of Forst for a hundred years now. Currently, they grow vines on some 20 hectares of land, with roughly 90% of the production dedicated to white wine, mostly Riesling. Cabernet Blanc makes up only about 1% of their overall production.

The grape Cabernet Blanc is a hybrid made from Cabernet Sauvignon and an unknown disease resistant variety that is believed to be a complex crossing of several varieties, possibly including Silvaner and Riesling. It was created in 1991 and is grown in small quantities in Switzerland, Germany, Austria and the Netherlands. Cabernet Blanc is quite robust, ripens late and produces wines with higher acidity that are supposed to age well. It is also robust against cooler weather, so can be allowed to ripen longer on the vine. It is still very much a new kid on the block, so even in the Pfalz, where it is more common than anywhere else, it is only grown as a trial (Versuchsanbau).

Cabernet Blanc is often described as similar to Sauvignon Blanc with some characteristics of Riesling. As this sounded rather appealing, I ordered a bottle to sample and report back. Sadly though, the poor Mosbacher was forgotten in my wine rack during the rather busy and not very wine-focused past few years, which is why I am only writing about it now. This also explains why I would not want to have the following notes taken as a review as such - the wine was stored for five years in a wine rack in my flat and these aren't the conditions where you would expect a medium-bodied white to flourish.

Now, with that caveat out of the way, let's jump right in. When I unscrewed the bottle there was a very noticeable pop, and the Cabernet was indeed a little bit fizzy when first poured into the glass. It features a light straw colour with a greenish tint and a rather refreshing fizz. The aroma is one of lime sorbet, citrus, anise, a hint of stone fruit and some gooseberry - overall sharp and refreshing, but not really distinct or with lots of depth. Drinking it is somewhat similar, giving the impression of a wine that has faded away to a degree, especially in the fairly short finish. The most noticeable element is the overly sharp acidity that wasn't balanced by substance, sweetness or at least deeper flavours - it felt a bit like, other than the acidity, the wine had faded away to an extend, leaving an unbalanced and muted impression behind.

I assume this is because they wine did not take well to the less than ideal conditions under which it was stored. Having said this, I can easily imagine what a Cabernet Blanc might be like when caught in its prime, especially a slightly more substantial bigger brother with well integrated acidity, very present aromas and flavours and perhaps a hint of sweetness. With similarities to both Riesling and Cabernet Sauvignon I think this grape is indeed capable of producing exciting wines, and so I shall keep my eyes open for a Cabernet Blanc that can be reviewed here under fairer conditions.

I love this one. I am from…

I love this one. I am from Germany and we often get this one in the store.