I haven't had much luck with my wine recently. For various reasons I haven't enjoyed much wine at home the past few years, so some bottles that should not have been forgotten were lost. History became legend. Legend became myth. And for two and a half years, some wines passed out of all knowledge. Or at least that's how Galadriel would have put it. Anyway, some wines spent probably a little too much time in London's tastiest wardrobe. The last few weeks I made it my mission to go through the aged wines in my possession and drink them. Sadly, I haven't had much success - until I opened this Pinot Noir from Baden that is. 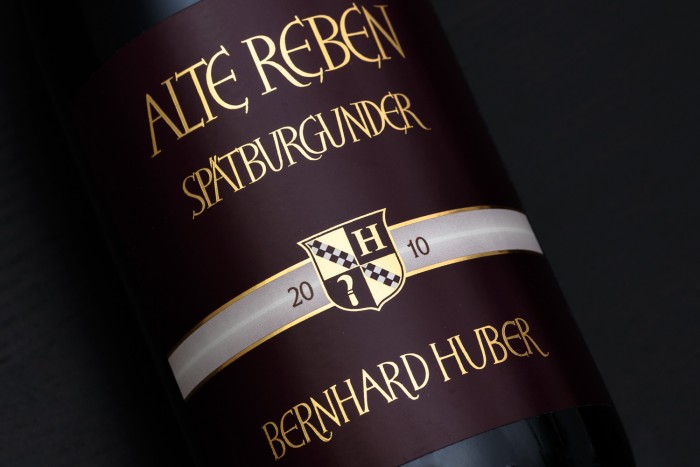 Bernhard Huber is, or sadly rather was, a Pinot Noir specialist - he passed away in 2014, to be succeeded by his son Julian. The Huber estate is located in Malterdingen, a small town in the German south west. Pinot has a long tradition in this part of Germany, having been introduced to the region by Cistercian monks in the 14th century or so. When Bernhard Huber took over from his father in 1987, Pinot was already planted on the family vineyards, with the grapes usually sold to the local cooperative. Bernhard and his wife started estate bottling and planted additional Pinot clones from France. Over time, they also added more land, so that the Huber vineyards now cover 28 hectares. In addition to Pinot Noir the Hubers also grow Chardonnay and a few other grapes. However, Spätburgunder, as Pinot Noir is called in Germany, remains the focus of the estate - so much so that some have called Bernhard Huber the German godfather of Pinot Noir.

The wine I opened this weekend is a Pinot made from (grapes from) old vines, old in this case meaning between 25-60 years. Now, I am a little hesitant to review the Alte Reben as my records show it has been in my wardrobe for almost six years. This is hardly ideal for any wine, although a good Pinot Noir can easily last for ten years or more. Even so, there was nothing wrong with the wine I poured to accompany a nice ragù. Quite the opposite actually.

I found a wine of beautiful colour, a red that just started to pale around the edges yet was otherwise enticingly dark, almost blackish. What struck me most about it was the precision and freshness of the Huber. It was so easy to drink to belie both its age and relatively substantial 13.5% ABV. Many of the classic Pinot Noir elements were present, from berries and cherries to woodland aromas and spices, but the wine wasn't exuberant either. The wood was extremely well integrated, to the extend that I didn't really notice it very much at all, at least not as a separate component. The ragù and wine played together very nicely, with each enhancing the other's spiciness. Overall the Huber gave the impression of an elegant, accomplished wine that had both force and elegance, especially due to the freshness.

The downside of how well integrated the wine was that to me it perhaps lacked some more distinctive elements, a certain wow factor to take it beyond a very accomplished wine. I don't want to make too much of this though as that may well have been due to how it has been stored. Even in its current condition I don't think this wine needs to hide from its French cousins - so if you can find a properly stored specimen I would say it should be ready to be enjoyed now. Cheers!