An English wine? Yes, very much so. One of the Wine Rambler's wine resolutions for 2010 is to explore the subject of English wine, and report back here. Today, that mission (virtually) leads me to Oxfordshire, specifically to Wallingford, about eight miles from Oxford, where Bob and Carol Nielsen planted 14 acres of wine in 1988. Today, Brightwell Vineyard make five different wines, including a rosé, a red (mostly made from Dornfelder) and a sparkling Chardonnay. They have won several prices for their wines and the 2007 Bacchus was awarded the Silver Medal in the 'Wine of the Year Competition' of the UK Vineyards Association. 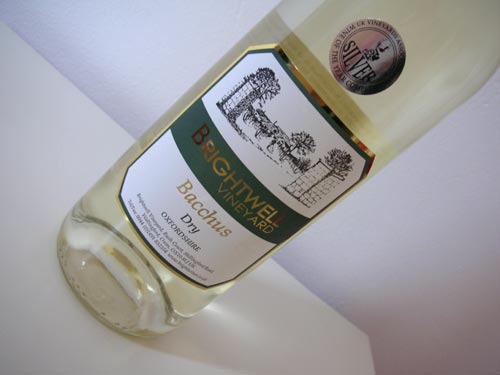 I bought the wine because it was recommended by the wine merchant, not because of the medal - I tend to ignore medals as they are often awarded by trade associations, so basically a group of wineries who give awards to their own members. While the UK VA medal too came out of a 'competition run by the industry for UK wine makers' (with 46 silver medals were awarded in 2008), the UKVA website also tells us that all their judges hold the prestigious title of 'Master of Wine'. Interestingly, one of the 2008 panel members was Stephen Skelton, who recently told me off for saying that English wine often seemed a bit too expensive to me for what it delivered.

Back to business and the Oxfordshire Bacchus. The Bacchus grape originated in Germany, where it was created in the 1930s by crossing the Müller-Thurgau grape with a Silvaner and Riesling cross. It ripens relatively early, grows where Riesling would be difficult to grow and produces fairly high yields. In Germany, it is often blended with Müller-Thurgau, to add more flavour, but its popularity is decreasing rapidly (about 2000 ha in 2007 compared to 3000 ten years earlier). However, Bacchus is grown a lot in England as it is suitable for the climate. English Bacchus is said to produce wines a little similar to Sauvignon-Blanc.

The first thing I noticed about the Brightwell Bacchus is the very light colour, a really pale citrus yellow. The nose is very fresh, with flowery (elderflowery) aromas. Add green apple and also some tropical fruit (it reminds me of a fruit gum I liked as a kid) for a crisp, bitter-fruity aroma, that has a bit of cat-piss-on-carpet to it. I have had this reaction to a Bacchus before and, like back then, I hasten to add that it is not unpleasant, it just adds edge.
On the tongue the wine is drier than I expected from the bouquet. A fresh, crisp dry wine, it really brings out the green apple, to which it adds some green vegetable and a bit of white pepper. Almost surprisingly after all this crispness, the finish even has its juicy moments, especially on the second day, when I experienced it as a little smoother.

Initially I was not quite sure what to make of the Bacchus, I have to admit. The bitter-fruity aromas it gave off at first reminded me of a particular style of light and fruity Riesling, a preconception that was disappointed when I tasted the wine, giving me the impression aromas and flavours were somehow out of sync. However, I hung in there and over time the wine grew on me as the nose became a little less exuberant and, more importantly, as I left my preconceptions aside. Suddenly it reminded me of a dry Austrian Grüner Veltliner I had a little while ago. Realising this was actually very helpful in appreciating the wine as I stopped judging it against something it should maybe not be compared to. So it made for a really interesting tasting experience that taught me something about preconceptions and wine tasting (see wine resolution #5).

The Bacchus is a light, fresh and crisp dry wine that is easy to drink, well made and certainly a decent showing from Oxfordshire.