Recently we reported on a somewhat unusual German wine, a Syrah from the Pfalz. As this wine got a lot of interest, I decided it was time to open a bottle of another, unusual, red wine from the same producer. After having sampled the 2003 Syrah it was time to try the flagship wine of the Knipser winery, the Cuvée X, a blend of Cabernet Sauvignon, Cabernet Franc and Merlot - all grow in Germany, just a few miles left of the Rhine. 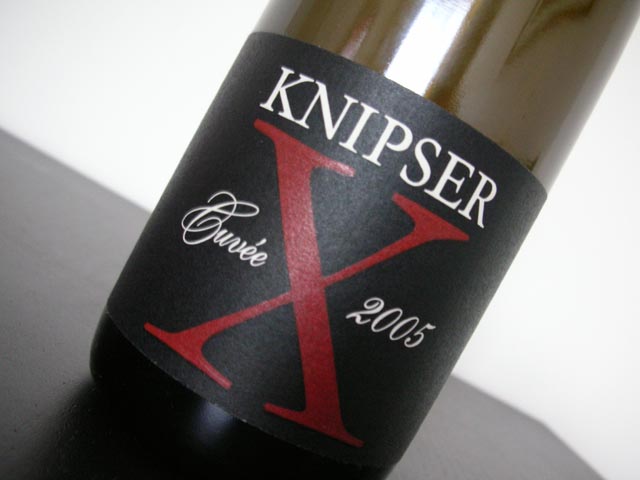 Knipsers were among the first in Germany to cultivate Cabernet and Merlot and they have been making the Cuvée X, a conscious nod to the great Bordeaux blends, since 1989. The X is matured in, mostly new, barrique barrels for 18-20 months (20 for the 2005, if I remember correctly) and the 2005 was released to market about 3.5 years after the harvest. The soil around the Knipser winery mostly consists of chalk and limestone, with additional clay in the vineyards where the grapes for the X are grown, so not too dissimilar to the Bordeaux. Knipsers won quite a few prices for the Cuvée X, which is also reflected in the price - 17.50 € for a half bottle. However, if you compare that to what the Bordeaux is charging it does not seem too outrageous. Can the X stand up to the Bordeaux wines though?

The nose is fruity, very fruity - deep, dark berries, lots of currant and cassis with spice and smooth oak and vanilla. Very juicy indeed, in a powerful cool way, supported by cedar and tobacco, herbs and cocoa. Even after two days the decanter still has an aroma you just want to jump in (and paddle in it, as Greg Wallace of MasterChef fame would say) - and we did of course empty it completely, so this is just the last few drops that still make me crave more, after two days!

What also makes me crave more of it may be the memory of a full-bodied wine that is deep and intense, with dark fruit - currant, blackberries, plum -, spice, herbs, oak and big tannins. The tannins are in no way harsh though, in fact, they are soft and a little velvety.

Seeing how well this wine stood up to the decanter and that it seemed almost unchanged (a little softened perhaps) after two days I would say that you can comfortably wait a few years before opening the next bottle. While I won't tell you that the Pfalz is the new Bordeaux, I think I can go out on a limb and say that the Cuvée X should be good enough to stand up to what the French do in a similar price range.

Leaving all those, perhaps pointless, comparison aside: it is a lovely wine, a big red in the best way, with power that is channelled through a good structure and ends with a long, really yummy finish.

In reply to Cuvee X by Barry

Good to hear from you! We first came across the X at an annual wine tasting in Munich a few years ago and were quite impressed. I also like the label, quite a change from the standard Knipsers label (which I also like, just very different in style).