Never heard of Sauvignon Gris? If not, don't be ashamed, it is hardly a well known variety and I have to admit that I was only dimly aware of its existence until I saw this wine in the Knipser portfolio. The Knipser winery is one of Germany's best, so I was very curious to see what they would make of this unknown variety. Knipsers are big believers in maturing wines properly before releasing them to the market, often using barrique barrels, and this beauty only went on sale two years after the harvest. So, what is it like? 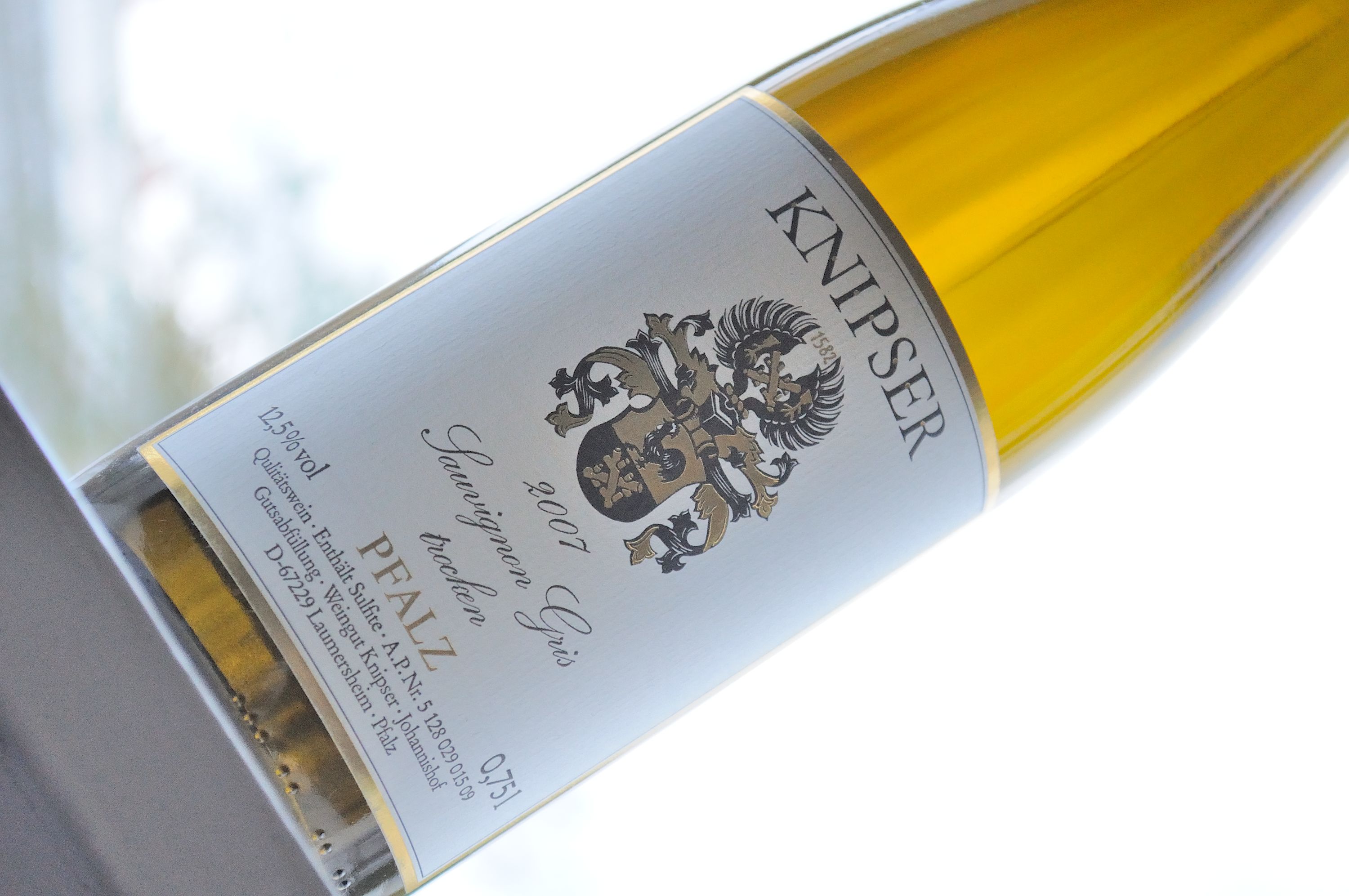 Let's start with a boring, albeit short, lecture on the grape variety.

The skin of the Sauvignon Gris grapes is more on the red side, but the wines are white. In fact, it is thought to be a mutation of Sauvignon Blanc and it is often blended with the latter. It tends to have slightly higher sugar content than Sauvignon Blanc - the Knipser SG is dry though. The two varietals are seen as so closely related that in a few years ago the German wine magazine Vinum organised a tasting of 100 German Sauvignon Blanc and Gris - which the 2005 SG from Knipser won. SG is grown in Germany, France and Switzerland, but also in Chile.

And now, ladies and gents, the wine. The nose is flowery, with a noticeable elderflower component. It also features tropical fruit, mirabelle, lime and tea aromas, all embedded in an underlying wax and mineral theme. Interestingly, there also are buttery-peppery notes with a creamy hint of vanilla, indicating that this wine was matured in barrique. Now, I am often sceptical about barrique, especially in white wine, but here it works very well. The overall appearance is fresh, crisp and clean with nice fruit, yet smooth and creamy with a bit of substance.

On the tongue the Sauvignon delivers what the nose promised, a fresh, crisp and very clean wine with a bit of creaminess and good substance. Crisp lime and mineral feature again, with a juicy finish that adds the creamy texture of the wood with a hint of coffee and a certain smoky earthiness. The wine has enough substance to make me think it was of late harvest quality, and also more body than the average Sauvignon Blanc.

When I say there is an honest simplicity to the wine, don't mistake me - there is nothing banal about the Sauvignon. It is just very clearly structured, in some ways puristic, but with some expertly applied barrique opulence. The Knipsers really do know how to use barrique - and I rarely praise the use of oak barrels in maturing white wine.

After writing up my notes, I sent the winery an email, to which they replied very promptly. They confirmed that the wine was indeed of late harvest quality (93°Oe for those of you who care), even though it was not labelled as such. Not only was the Sauvignon Gris aged in barrique, it also spent about six months on lees.

Certainly a variety and style I will keep my eyes peeled for.