Yes, sometimes we Wine Ramblers find aged wines in our neighbours' garbage (although Julian would hasten to add that he never forages there systematically). At other occasions, the aged wine seems to find us, and so it happened earlier this year when I went to the Netherlands to taste two seriously aged German wines, two wines so old that by rights they should have been dead. 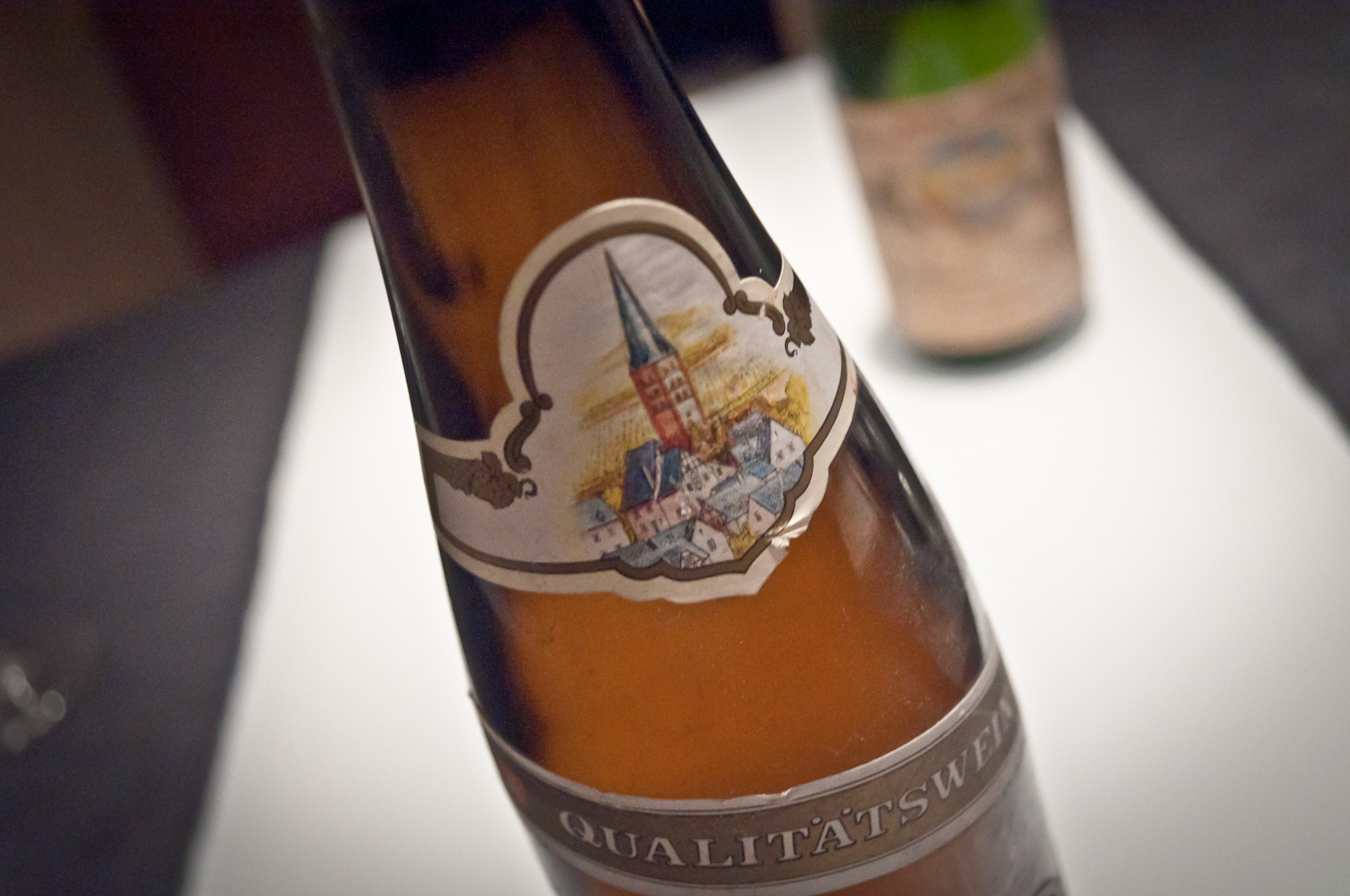 I did not know this when I set out, of course, but I was about to learn a lesson about ageing and storing wine and about not to underestimate hopeless losers.

First things first though. The Netherlands. Last year my friend Mike - yes, the Mike who introduced the Wine Rambler to seriously aged beer - moved to the Dutch coast to find fame and fortune. What he also found when moving into his new home were two bottles of wine. Not any wine though: both wines happened to be German, so a clear case for the Wine Rambler, and both were old, so a clear case for a joint tasting.

What was unusual about the wines was not only the age but also that they were, according to conventional wisdom, not age-worthy at all. Only a small fraction of all wine does actually improve with age and even then the ageing potential may be more limited than many people expect. Mass-produced, cheap wine like the German Liebfraumilch, however, would hardly fall into the category you'd want to keep for more than a couple of years at best (IF you want to drink it at all). Well, one of the wines was a Liebfraumilch, and from 1985! The other was an unspecified Mosel blend that was even older - 1979.

Mike had found the bottles in the basement of his house, or rather in a sort of in-between level under the floor of the living room. He knew that the people who lived in the house before had stayed there for quite a while (and left him all sorts of junk), so chances are that the wines had been bought in the 80s and had simply been forgotten since then. When Mike found the wine, he emailed me right away and then set the bottles aside, to be opened at my visit.

And so one rainy evening we were gathered round the dinner table, staring at the 1984 Michel Schneider Liebfraumilch, wondering what to expect. The producer, by the way, is still around - founded in 1869 the company was bought by ZGM in 1998 (link in German). As I had suspected, Michel Schneider seems to have been focussed on the mass market, and that did not seem to bode well for the chances of the Liebfraumilch still being drinkable (if it ever was).

Boy, were we in for a surprise though. Now, I won't tell you we found a great wine, but it was certainly both drink- and serviceable, and not only that, between the three of us we finished the whole bottle!

The Liebfraumilch was of relatively dark colour, a gold, intense yellow with a touch of red brick and metal-brown, only slightly lighter round edges. It smelled somewhat buttery, with aromas of linseed oil and cough sweets, a little smoky and earthy, clearly oxidised and with light petroleum notes, but still enough fruit left to pin down Bramley apple. The finish had a hint of not so exciting bitterness, an impression that was enhanced by a certain smokiness, like grapefruit just without the fruit flavour. Even so, the Liebfraumilch still had flavours of lemon and apple with a bit of dusty grapefruit and liquorice aromas. Faded into the background also was a hint of sweetness, but aged away - "no longer sweet, but not unsweet", as Mike put it.

After this success we opened the second wine a couple of days later: A. Pies Söhne, Bernkasteler Kurfürstlay Q.b.A., 1979. I have not been able to find much information on this producer, but the wine looks like one of many cheap, unspecified Mosel blends made from Müller-Thurgau, Silvaner and/or perhaps Riesling. So certainly not much to hope for at this age (if ever!).

But yet again, the wine was not dead, and it did not smell like vinegar either. Well, a little perhaps, but more like apple vinegar or cider with a bit of gone-off fizz. Don't imagine this wine as very fresh though, it also had lots of oxidised notes, faint sherry aromas, raisin, a bit of mustiness and an old fireplace smokiness. Our good ol' boy also tasted a little like it enjoyed hanging out in or at least near old fire places. What started out smoky soon revealed aromas of pear and then grapefruit - not much of them, but still distinguishable. It also tasted a little of brandy with coffee and cake. There was also a general mustiness and a finish that had a hint of vinegar. The finish started okay, but soon turned into unpleasantness, to end for good on a more acceptable note. Once that passed, a light, seriously aged wine that either never had had any or by now had lost any complexity emerged, a wine that was not exactly enjoyable but, as Mike stated, wasn't a disaster either as "I have had worse wines at private views and events."

Even so, we did not finish the last wine - also because we had a grand cru Riesling waiting for us -, but it was still a massive surprise. When I set out to the Low Countries I had certainly not expected to find anything even remotely approaching enjoyable. Not having tasted the wines decades ago I cannot be certain, but I would be surprised if the relatively good state they were in was a sign of high quality at the time. Instead I do think our two subjects had just been stored under near perfect conditions and never moved. If this is true, it would be a testament to that fact that even cheap wines can survive much longer than many people assume. If I had a cellar, I would be tempted to buy similar wines and put them away for a decade. However, before anyone tries that I'd much rather you bought a good wine, like a Mosel Auslese from a decent producer, and put that away for a decade or so. Cheers to that!

WOw! what a great experiment,

WOw! what a great experiment, however unintentional. Interesting read but as you said, I'm not exactly going to run out and buy a bottle of Blue Nun to hide away for the next decade. Cheers!

In reply to WOw! what a great experiment, by TheWinesleuth

Thanks, Denise - but maybe

Thanks, Denise - but maybe you should. In fact, how about getting 25 bottles and drinking one every year and reporting back. That would be a good scientific experiment, and other than doing this with a quality Mosel Auslese it also would not be very expensive...