Music does not taste. Wine does. Rather obvious, but not nearly as simple as you may think. What we perceive as the taste of wine is actually our brain combining all sorts of information and the tongue only plays a relatively small part in this. What we see, know or hear, everything has an influence on how we taste. And as music and wine are often enjoyed together Classic FM and Laithwaites Wine argue it may be worth thinking about how to match them.

To make this point they hosted a wine and music tasting in London last week and the Wine Rambler went to investigate.

The purpose of the event was to create a discussion about pairing music and wine and to feature a new wine-based radio programme called "Tasting Notes". The Classic FM show is hosted by Simon Callow - outside of the UK probably best known as actor in films such as "Four Weddings and a Funeral" or "A Room with a View" (no, he is not the same person as the infamous Simon Cowell!). Laithwaites provide the wines for the programme.

As the wine schedule is published in advance listeners can drink along, which should make for an unusually active and hopefully also entertaining way of listening. Each episode features two wines and the idea is to also link music and wines geographically so that a story can be told about the origin of both. As a believer in wines with regional identity I think the concept is great although I would have hoped for some matches being a little less obvious.

Let's take the example of the episode of 4th November, dedicated to Germany and Austria. Personally I get a little tired of both countries always being represented by Riesling and Veltliner - how about Pinot Noir and Blaufränkisch for a change? - but I also understand that for a show like "Tasting Notes" it makes sense to go for the signature grapes (which are also more widely available in the UK than other choices). However, is it necessary to play to expectations to the extent of pairing the Austrian wine with the all too obvious Blue Danube? Not only is it a little too much cliché for my taste, I also don't think it is a particularly good match, at least not for how I see the typical Grüner Veltliner.

Most Grüner Veltliner, and the one from Winzer Krems is no exception, is crisp, fresh and with zesty, peppery notes. To me this calls for a piece of music that is a little less charmingly rounded and playful, less bubbly if you will - in fact one of the other tasters suggested Champagne would be the perfect pairing for the Blue Danube. I would have gone for a more modern piece for the Veltliner, or perhaps for a fresher Haydn, such as the String Quartet Op. 76, No. 1; Mvt. 2. You may disagree with all these comments - and that's fine as part of the joy of drinking wine comes from the conversations it can trigger.

This certainly worked on the evening of the tasting, and it even worked on Flickr where me posting the photo below produced the following comment: "What an interesting concept. I wonder what the Sex Pistols music wine would taste like?" You can find the reasoning behind my response on Flickr, but in short my answer was Riesling - not the Riesling that "Tasting Notes" served with Bruch's Violin Concerto 1 though as Max Ferd Richter's wine would have been way too pleasantly delightful to be my first choice with punk (it worked very well with Bruch though).

Tasting wine with music feels different to your normal wine tasting. The iPad-powered headphones did a good job at shutting out the usual buzz of these events, making the actual tasting a much more solitary, calmer activity. In a way I like that as the rush of wine tastings does not always suit my style of tasting. On the other hand the music becomes so prominent that it is harder to look at the wine purely on its own merits - which of course is the desired effect.

In a way the experience was not too dissimilar from matching wine and food - components can enhance or overpower each other and sometimes they create pleasure through harmony and at other times through tension. Here too perceptions differed: for one of my companions the finale of Camille Saint-Saëns's Organ Symphony lifted the 2010 Grande Réserve De Gassac Rouge up whereas I found it dominated the match. 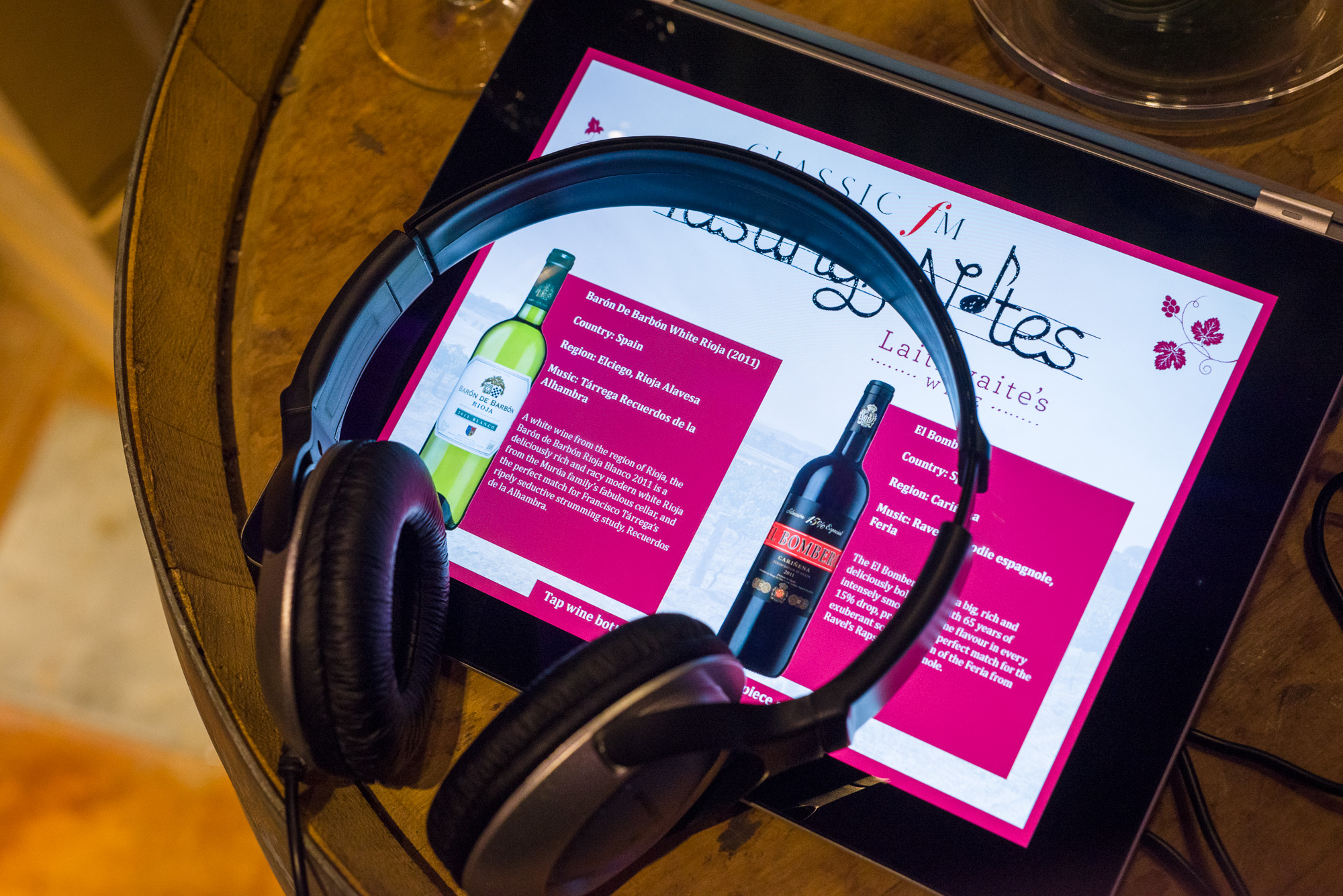 Leaving these personal preferences aside the effect of music on the wine tasting experience is scientifically proven. A study by the Heriot Watt University for instance demonstrates how music effects the "taste" of wine:

The results showed that the music had a consistent effect on the participants' perception of the wine. They tended to think their wine had the qualities of the music they were listening to. So, for example, both the red and white wines were given the highest ratings for being powerful and heavy by those participants who drank them to the tune of Carmina Burana. 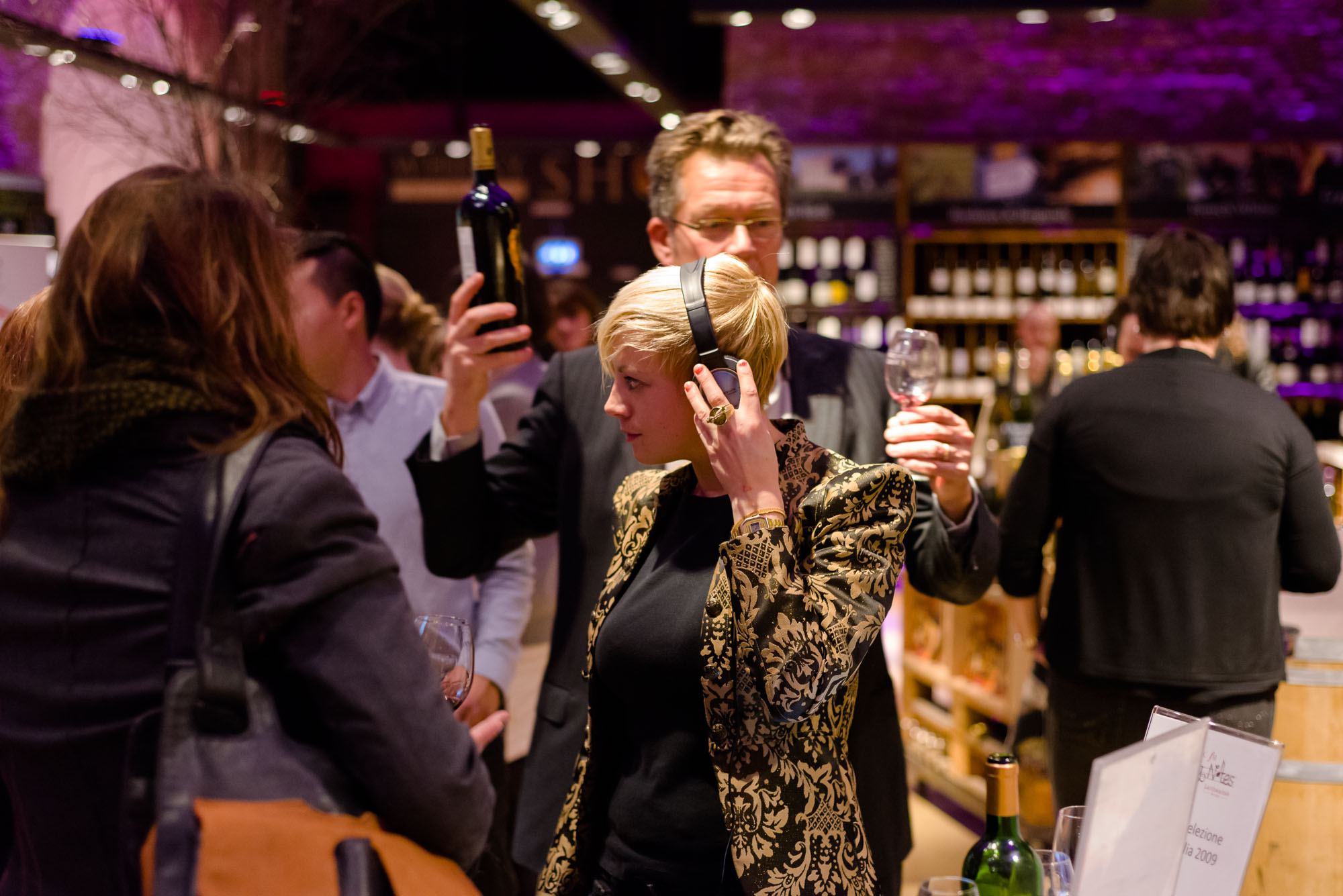 people were five times more likely to buy French wine than German wine if accordion music was played in the background. If an oompah band was played, the German product outsold the French by two to one.

This last quote gives me hope for raising the profile of German wine in British supermarkets (Wines of Germany UK, do you listen?) despite oompah music feeling nothing like the German wine I drink. Even so it seems worthwhile to explore the relationship of music and wine further, and as it gives you the opportunity to "participate" in a radio programme in a very different way "Tasting Notes" may very well be an interesting show to follow.

Does that mean you will now have to struggle not only with the complex business of pairing wine and food but also with finding the matching music if you want to host a dinner party or impress a date? Only if you want to would be my answer. More important than aiming to create the "objective" match is to match wine to people and the occasion. My friend Dirk for instance dislikes even slightly off-dry wines as he finds them sickly sweet, no matter how well they may match a particular dish. So do whatever works best for you and your guests, or as one of the participants of the "Tasting Notes" tasting commented: "I really like this wine, but I like it without the music."

Simon Callow's Tasting Notes is on Sundays at 3pm (GMT) on Classic FM; wines are available from Laithwaites Wine.

150 minutes, 74 Rieslings, 1 mouth. Madness? Ravenous for Riesling!
English countryside in the glass: English Wine Producers Tasting 2011
It's Only Natural: Impressions from the Real Wine Fair 2013
Learn to taste German Riesling in London
A taste of Chablis