When the Wine Rambler committee assembles in Munich, we often send two evenly matched wines into a blind tasting battle. Last weekend was no exception and two formidable contestants were preparing themselves for the main event. To get us in the right mood for this epic battle, a good supporting act was needed. So I brought along a mystery wine. It was pretty obvious that the properly wrapped wine was a rosé, but little did my co-ramblers know that it was from the County of Kent. However, I too was in for a surprise - little did I know that this support-act blind tasting would turn into a triumph for English wine (to be followed by a defeat for German winemaking, but that is another story). 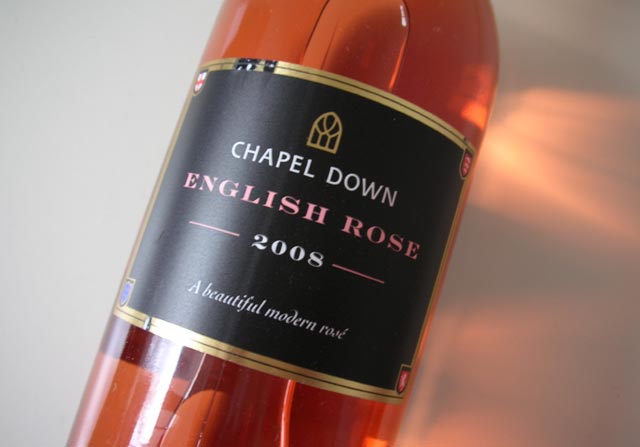 The rosé from Kent, labelled as 'English Rose', came from Chapel Down, the biggest UK winery. I bought it at Waitrose, so technically it is also a supermarket wine. Under this label I am reviewing (mostly cheaper and mostly German) supermarket wines, but I fear I have let that mission slip a little because the results were often disappointing. So bringing the English Rose along to the tasting was almost like killing three birds with one stone: check out another supermarket wine, ensure that we do not lose sight of rosé (which we are sometimes in danger of) and, last, but not least, stick to our new year's resolution to look for good English wine.

Rather fittingly for a wine called 'English Rose', the Chapel Down is of a fair and pinkish complexion, to which perhaps some light red-brown is added. This English Rose certainly is a pretty lass. Even better, it does not only look the part, it also excites with a tempting fruity nose - red currant and strawberry stand out in a mixture that is enticing but by no means overwhelming. Both aroma and taste are in fact well structured and very neatly laid out in a fresh, juicy and creamy wine that just makes you want to have one glass after the other. To make things even better, the English Rose also adds the right amount of fresh acidity to be really well balanced, and it shows off a good finish that is fruity and fresh, with a hint of mineral perhaps.

When I brought the wine over to Munich I did hope it would be good enough to entertain my co-Ramblers, but what I did not expect was the level of enthusiasm that greeted the English Rose. Julian, for instance, compared it very favourably to some French rosés he had tasted a while ago. One thing did leave my co-Ramblers a little puzzled though. Where did this wine originate from? Germany was ruled out quickly; as were Spain and southern France because it seemed the wine had too much acidity to come from a really warm wine growing region. New World perhaps? Austria?
When I revealed that it was neither of those but Kent, everyone was truly surprised. So was I, by the way, because - and we all agreed on this one - it seemed like an excellent example of a fruity, elegant and fresh rosé to us, certainly one of the best we had in a long long time.

Interestingly, this wine is actually made from red and white grapes, and what an unusual mixture (see below). 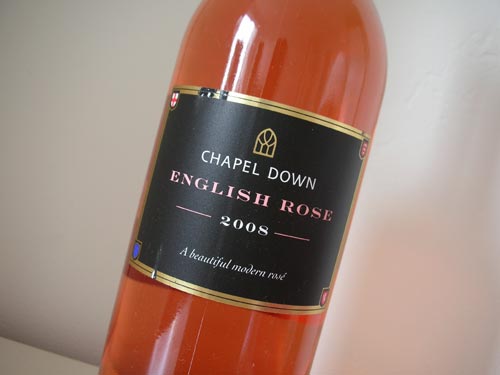 In January 2010, when I wrote down 'Continue the search for an English wine to get really excited about.' as New Year's resolution #9, I was curious to find out more about English wine and confident I would find something decent (or even really good, as far as sparkling wine was concerned), but I was also a bit sceptical. Why else would I have written 'continue the search' instead of 'find'? We will still continue the search, of course, but even if I find nothing better than this I will be quite happy. And I will shut up about English wine being a little too expensive for what it is - because this one isn't. Even more importantly, I could easily see myself buying another bottle. And that really is an achievement as the blogging means that I rarely buy more than one bottle of a wine as there is so much else out there to report on.

The crazy part is that when Torsten brought over from ENGLAND this rosé that he was suspiciously evasive about, the thought that it might be english very fleetingly, almost subliminally crossed my mind, but I dismissed it out of hand as soon as I was tasting this perfectly made, beautifully fruity wine. Stripe me pink and knock me down with a feather, is all I can say.

In reply to well stripe me pink! by Julian

Pinkie and the Brain

The thought that you might suspect something had crossed my mind, but there was not much I could do about it - other than not select an English white wine, as that may have been too obvious. Well, it is good that the wine was good enough so that it did not really matter where it came from...