Supermarkets are fascinating. They are evil, they are convenient, they are uniform, they are where we shop. Not all of us, not all of the time, but still often enough that the big chains have a turnover that dwarfs the GDP of many a country. And, despite what wine critics with their writings about hand-crafted wines from family-run vineyards sold by independent shops will make you believe, supermarkets are also where most people get their wine from - about 80% of the UK retail market. This means that if you want to reach the average wine consumer or if you want to understand what or how they buy, supermarkets are the place to go. 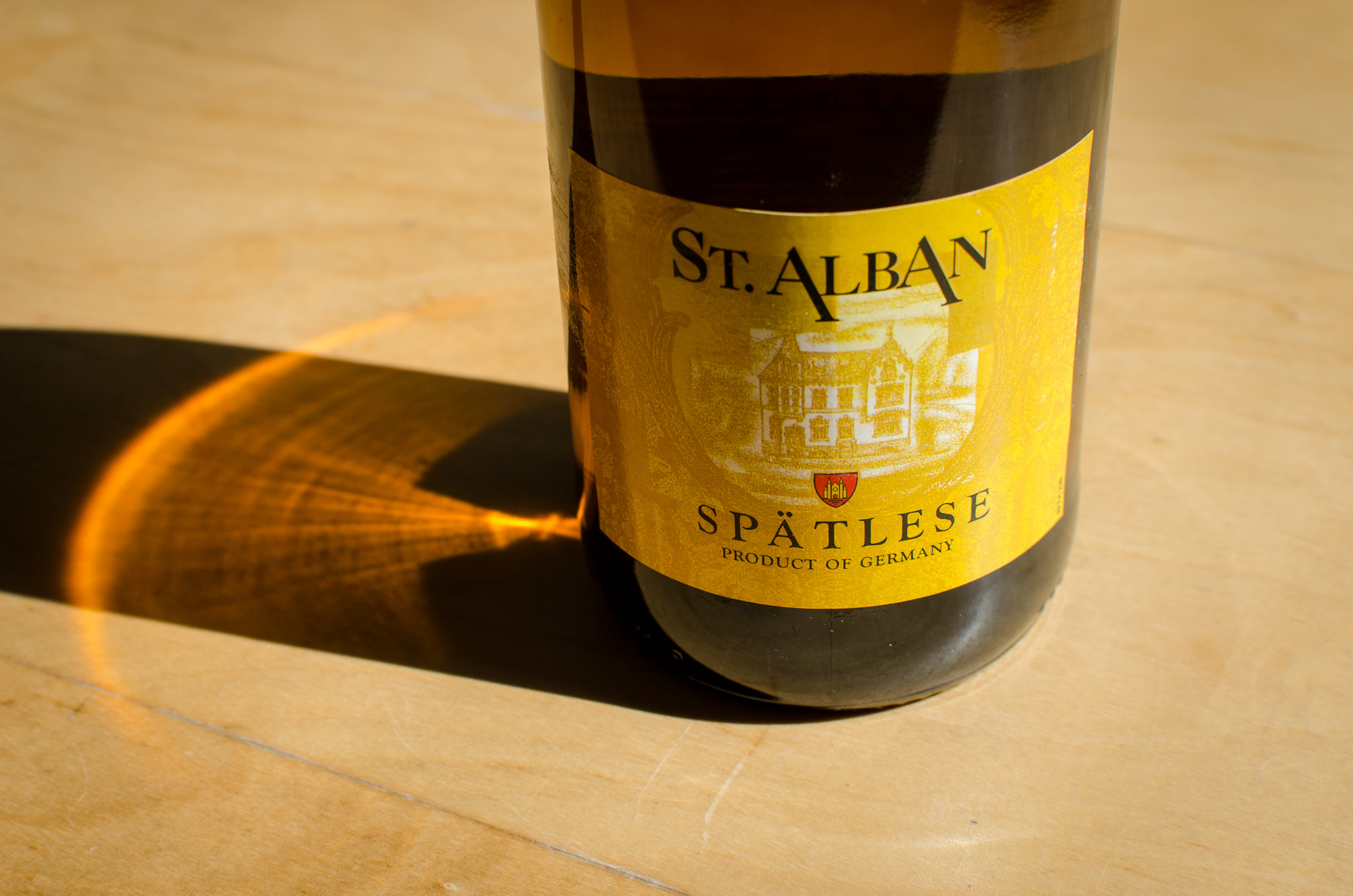 So every once in a while I venture into a supermarket and buy whatever German wine I find. If you have followed my supermarket wine exploits you will know that at times this has led to dangerous self-experimentation, and often to disappointment. Is today's wine any different?

In theory it should. After all we are looking at a "Spätlese", that is a late harvest wine, which in the German wine classification indicates a sweeter wine of high quality. In theory. Effectively, the German wine law as a product of the supposedly precise German people is surprisingly ineffective at indicating wine quality. Yes, the grapes will have had a certain ripeness, resulting in a certain must weight, but that's where it ends. Unless the wine comes from a good producer, of course, where the classification still has meaning. The Mainzer St. Alban was bottled by D-RP 907 009. Yes, that's right. D-RP 907 009. We will come to that in a moment.

First the wine. The colour is a pale straw. It is clean but also looks a little thin. Looks are not everything of course, but the bouquet is hardly better. There is a bit of stone fruit and a faintly floral aroma, but it lacks focus and clear expression. Imprecise honey-dew melon comes through too and a vaguely medicinal whiff that is hardly exciting. Somehow it reminds me of the white part of those fruit gums that have a colourful, semi-transparent fruit top and a more creamy, sometimes sickly sweet white part below. Hardly exciting. On the tongue it gets worse. You have to give the wine credit for consistency as the medicinal, honey and fruit gum elements show up again, but it all feels somewhat papescent, reminding me of boiled Harribo fruit gum (don't ask, a story from childhood days). There is also a not unpleasant touch of caramel in the finish, but the wine still left me with the feeling of a sweet cough medicine that has a burning touch in your throat - and that certainly is not a way to say that the acidity is in any way exciting.

This may seem a little harsh, so maybe let me say that if you manage not to pay attention you can drink it, and the sweetness with the caramel makes it bearable - but on the other hand why would you? A nice fruit juice and one or two fruit gums would be better and cheaper. I could not get myself to go beyond the first glass, despite some of that making it into a chilli and orange sauce that was not too unpleasant with fried scampi. And burned my taste buds enough I could finish the glass.

Sadly, the label does not tell us what grapes the wine was made from. Usually these cheap bulk wines are made from Müller-Thurgau, often with a little Silvaner - and if you are very lucky some Riesling. Grapes come from a wide range of vineyards and are bottled by, for German standards, very large operations. In the case of the Mainzer St. Alban the winery is not identified on the label, but the above identification number is given: "bottled by D-RP 907 009". D stands for Germany, RP for Rheinland-Pfalz or Rhineland-Palatinate. As far as I know there is no database where you can check but it seems the number identifies the Weinkeller ("wine cellar") Peter Mertes - who preferred not to be identified with the St. Alban. Germans may not have gotten the wine law right, but at least the bottling estate can be tracked - as can the wine as it has been assigned the official number "2 907 009 538 11" - all German "quality" wines have a number that allows to identify them.

So finally we have restored some faith in the methodical Germans. However, I doubt that the Mainzer St. Alban will do anything to restore the British confidence in German wine or do anything to change the image of German wine as cheap, sweet plonk. I don't know how many bottles Sainsburys sell of this, but as we are looking at one of the largest British supermarket chains the St. Alban may influence many more consumers than the average wine critic.

Is there a British supermarket that buys outside of the stereotypes? Surely they must realise that shoppers' palates have become more sophisticated & with a preference for drier wines. They can't be selling that much cheap sweet plonk these days, can they?

In reply to Yum, boiled Harribo! by Mike

Thank you for your comment, Mike. You can get good German wine from British supermarkets, Waitrose for instance has some and Sainsbury's also offer the odd one, depending on which branch you shop at. Sadly, most German wines at Sainsbury's are from the dreaded selection of Blue Nun, Liebfraumilch and Piesporter though.

You'd be surprised how well these wines still sell. Not only do they tend to be cheap, there is also a market for off-dry whites. In 2010 for instance, the UK off trade’s No. 1 best selling non-Italian Pinot came from Germany, and it is made in an off-dry style. I forgot where it was in the Pinot Grigio rankings overall but it did do reasonably well compared to some Italian brands too. The UK is still a large importer of sweet and off-dry German wines. Now, I don't mind that as Germany makes some of the best sweet and off-dry wines in the world, but the UK buys a significant amount of the cheap variety, and those are not very cheerful...