I am a Swabian. It is not easy for me to admit this. Not even in English and to an audience for which this may not mean anything at all. In Germany, there is nothing cool about being born into the tribe that is famous for bringing the world inventions such as the compulsory weekly sweeping of the staircase (I am not kidding, it is called Kehrwoche) or a special mortgage savings account (Bausparvertrag). The latter may recommend us to the English, but I am coming out tonight for another reason. Yes, I am a Swabian and there is nothing cool about it. But I am also a Swabian who as a child played just a stones' throw from where Rainer Schnaitmann now makes this great value kick-ass Riesling in the town of Fellbach. Also, I am the Swabian who was lucky enough to down the wine with a cool Scottish girl who likes her white wine dry and has a crush on Swabians. 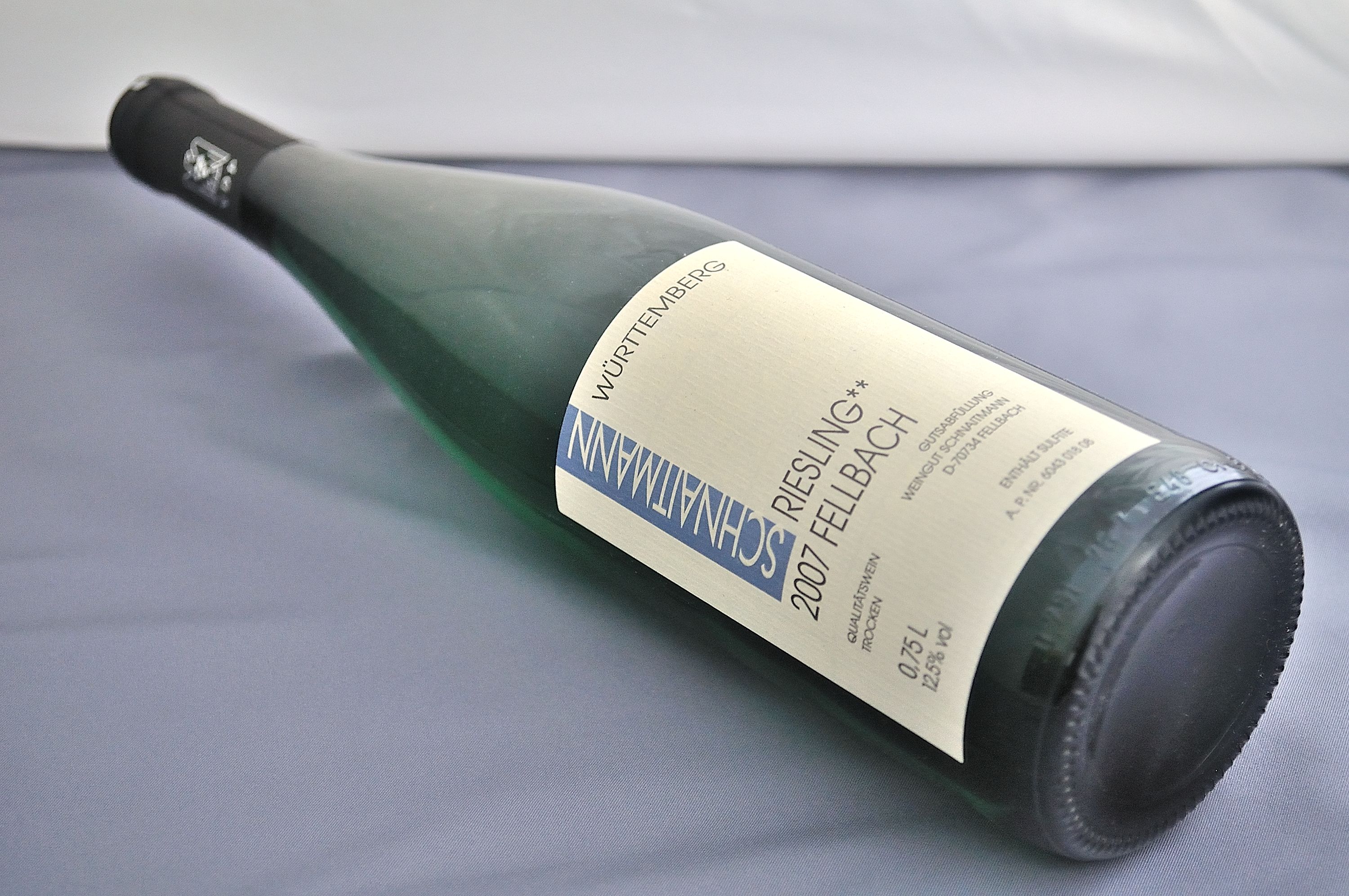 Whether my friend Laura's crush on Swabians means very much for Rainer Schnaitmann I wouldn't know. Most likely he is happily married.

What I do know is that the scion of a dynasty with 500 years of winemaking history started producing wine under his own label in Fellbach in 1997. With a focus on low yields and high quality Schnaitmann soon acquired an excellent reputation. On 12 ha of land in, around and near Fellbach he is now growing quite a variety of grapes. The red ones include the local hero Trollinger, but also varietals such as Pinot Noir, Dornfelder, Pinot Meunier, Cabernet Franc, Merlot and Syrah. The whites are as diverse and range from Riesling to Silvaner, Pinot Blanc/Gris, Gewürztraminer and Sauvignon Blanc. Schnaitmann also produces sparkling wine and rosé.

Fellbach is located in the slightly cooler south-eastern part of the Swabian wine growing region. The temperature may explain why Riesling is more common here than in other parts of Württemberg. For his Riesling, Schnaitmann increasingly relies on natural yeasts for fermentation, and the wines are being bottled after several months on the yeast. 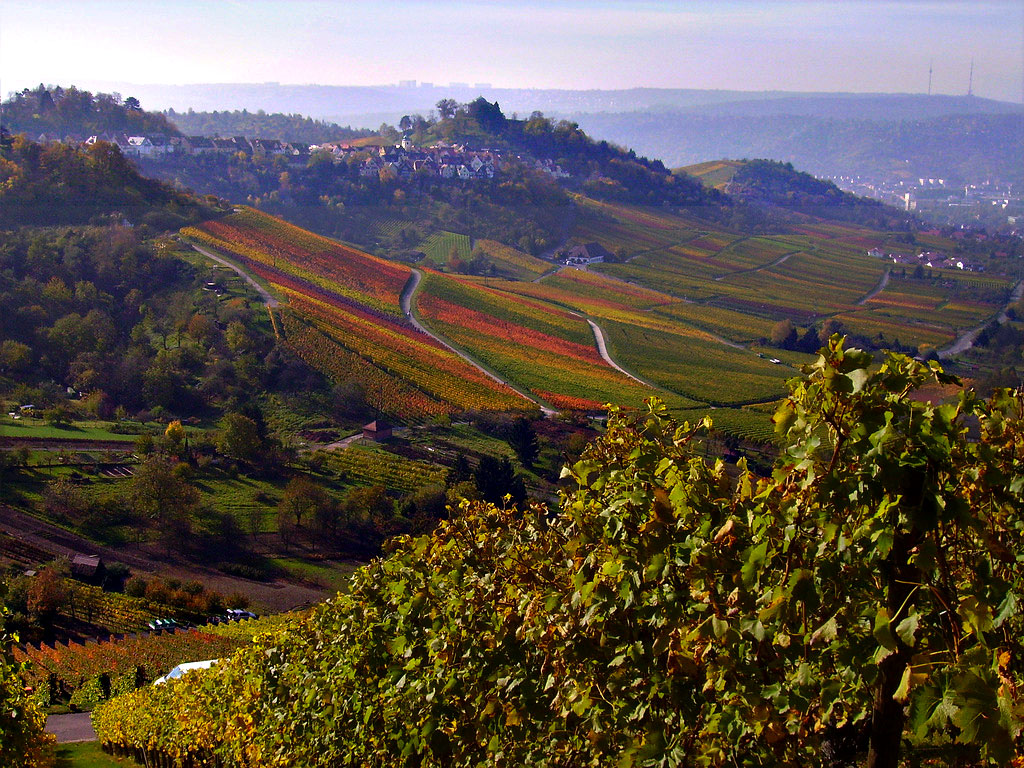 I did not know anything about this when I lived in Fellbach, and back then even for Rainer Schnaitmann running his own estate was still a few years in the making. What I mostly remember about Fellbach are the fantastic Spätzle you can eat there, a very robust and strangely shaped Swabian type of egg noodle. I also remember having a hiding place in the garden of a local conference centre - where a friend and I based the HQ of our detective club. I remember a guy with a bonanza bike demolishing my playmobile castle and me retaliating by no longer letting him watch Captain Future with me - most kids my age were not allowed to watch the show, but at least with regards to Japanese scifi I had the cutting edge over the local Swabians. And I remember playing football enthusiastically. How times have changed.

Now I care much more about serving Swabian Riesling to Scottish girls. This particular specimen (of Riesling, not of girl) has an exciting nose (actually, Laura's nose isn't bad either) that features a range of lovely fresh (melon, pear and apple), baked (peach) and caramelised fruit. What mostly determines the character though is an intense smoky mineralness that is accentuated by mentholy herbal notes. A bouquet that radiates character and focus. Smoky is also my first impression on the tongue, almost bordering on burned potato peel. After the very fruity nose the Fellbacher Riesling feels very crisp on the tongue, a smoky, crisp minerality that is enhanced by good acidity and a citrus finish that starts sharp and ends more on the fruity, juicy side. If you like dry and crisp wines with character that are not too heavy, the Schnaitmann Riesling should not disappoint, especially for the price.

Well, as a girl from sunny Baden I know exactly what it means to be tainted with the uncool Southern German brush, however, I have long since given up worrying about it: Baden (and Wuerttemberg, i.e. home of Swabians) are very beautiful. Our wines are lovely (if you know where to go) and we in Baden have the finest cuisine in all of Germany! So what's not to loke? Cool? Of course we are!

Let me know when you fancy some Spaetzle! Anne x

Torsten...don't hide yourself....
I agree with Anne...beautiful area along with Baden...great food and wines....
Spätzle (ha-ha) and the Scots do have strange tastes...so accept what you have...
you could be from Sachsen(smile)

A word from the Scottish girl in question

Glad you clarified that it was the wine that had the fruity nose, not me!

I think Reiner is pretty hot, actually:
https://www.wein-plus.de/images/magazin/schnaitmann1075.jpg
and frankly, when his wine is that good, I don't mind so much what he looks like. ^_^

P.S. Spätzle sounds yummy! Makes me wonder what other amazing things have come out of southern Germany ...

Re: A word from the Scottish girl in question

Oh, I forgot to add the obvious comment: I have come out of southern Germany!

You can take a man out of swabia, but you can never...

take swabia out of a man. And why should you want to? Although I have more of an accent, you are in truth the more deep-dyed swabian of us Wine Ramblers: Think love of technology, think frightening levels of general effectiveness and organisation. Let's face it, if Kehrwoche were declared by Clapham Council next Saturday, I shouldn't be surprised if somehow a broom and mop brush should turn out to have been kept waiting and in perfect working condition.

In reply to You can take a man out of swabia, but you can never... by Julian

Julian, this is going to mightily confuse our non-German audience. I am pleased to hear that Jack Bauer also has a 'Privathaftpflichtversicherung'; even though this is not something the English know of. I do of course have one too. My Swabian credentials mean next to nothing where I live though as my neighbour John surpasses me on all these accounts. And no comment on the Kehrwoche in Clapham.

Another reason for all Swabians to be proud...

"Hajo!" as your fellow Swabians (and Badisch adversaries) would say. :-)

In reply to Another reason for all Swabians to be proud... by Simon

Re: Another reason for all Swabians to be proud...

That's very interesting, Simon. I had no idea that Aldinger, the other Fellbach based winery, won the prize for 'Collection of the Year'. It happens though that the pleasant Swabian wine tasting example that I mentioned in my previous comment was with Aldinger just a few weeks earlier. Maybe next year I should pay Fellbach a visit. I haven't been there since the late 80s...

Maybe I need a tattoo on my right forearm saying 'Swabian pride' and boasting a Spätzle grater and a savings account statement.

In reply to Re: Another reason for all Swabians to be proud... by torsten

I belly-laughed loudly after reading that last sentence.

Really enjoyed your blog post as well (and the other comments), I hasten to add.

My goodness, Swabians and Scots are a match made in heaven.

I say Spätzle / you say spatsle

God, where to start? Maybe I begin with Barry. Thanks for sharing your impression of the Schnaitmann. Considering that the wine does not seem to have aged much over two years it may keep for quite a while. Shame I did not buy a another one. As much as I'd like I also cannot argue with the point about Saxony (this is where we loose all readers from that state forever...

Beautiful, and here we move to Anna's comment, - Baden is beautiful without doubt. I haven't been there too often but always enjoyed myself. And the food. The wine is excellent too. I don't have that much experience with wine from Württemberg, but am working on changing that. Julian and I tasted some very encouraging ones at a recent tasting in Munich (report to follow, watch this space). I am also at peace with other parts of my Swabian heritage, including my never ending love for Spätzle; Maultaschen can also be awesome, although probably not so interesting for vegetarian Laura I'd think.

Spätzle, for those who haven't come across them, can be described in several ways. I like how it is done in a recipe for mac and cheese with an umlaut:

Mac and cheese is a wonderfully evil dish--but it’s not always perfect. You know how the "mac" part tends to go limp when it bakes? How the under layers capitulate to the molten cheese and lose their integrity? Well, with German engineering, this just doesn’t happen.

The basic recipe for Spätzle (the Swabian diminiuitive of 'Spatz', i.e. little sparrow) from the same site calls them 'noodles without borders' and goes on to say:

The fundamental appeal of spätzle is their light, chewy simplicity. They are a bit bouncier than rolled and cut noodles, and when they curl up in your mouth they’re a lot of fun. But plain boiled spätzle is nothing compared to butter-fried spätzle, which becomes super-anointed with appeal when it meets a hot skillet for a light browning. This is the moment when spätzle surpasses itself.

And with regards to Rainer Schnaitmann we can be pleased that both man and wine find Scottish approval. Point about the crush on Swabians proven, I should think. Amen, brother - or brotherle, as the Swabian diminutive would be.

My mum just pointed out to me that the conference centre I mentioned above used to serve local wine back in the 80s when we lived there, especially from the well known Fellbacher Lämmler vineyard - one of Germany's top vineyards. Schnaitmann owns bits of it, as does Aldinger and a vintner cooperative. I wonder what the quality of those wines was like in the 80s...

I am still laughing at

I am still laughing at "Kehrwoche"... (and not so foundly recalling the memories of having to mop four flights of stairs while living in a WG in Munich ;)

In reply to I am still laughing at by Lindsay Morriss

Re: I am still laughing at

It is funny that you should mention Munich, seeing as it is where I moved to when I left Swabia. Interestingly, I never had to clean stairs there, cleaning of the stairs was always included in the rent.

If I had to compare Swabia and (Upper-)Bavaria I would use the following similitude: Swabians would own an expensive Mercedes, but always hide it - apart from Saturday afternoon when it would appear in front of the house to be washed by the owner. Not to show off wealth, but to demonstrate that they keep everything clean. Bavarians would always park their BMW in front of their houses; they would have it cleaned, occasionally, by someone else.

Now we are getting off-topic. Or are we? I have never lived in the wine growing region of Bavaria though, so the comparison may not quite apply here. Perhaps things have also changed since the late 80s...