Oregon is bad. Stop it if you can. Here it comes. Here it comes. Now it's after you. Flee to some place new. Run away. Run away. - For the Wine Rambler it was too late. Oregon got me. And if you want to find out how it all happened and what this has to do do with one half of a team of almost-giants, well, then it got you too. Don't be afraid, though, it will all be revealed. And make sense. Sort of. Either way, there will be wine! 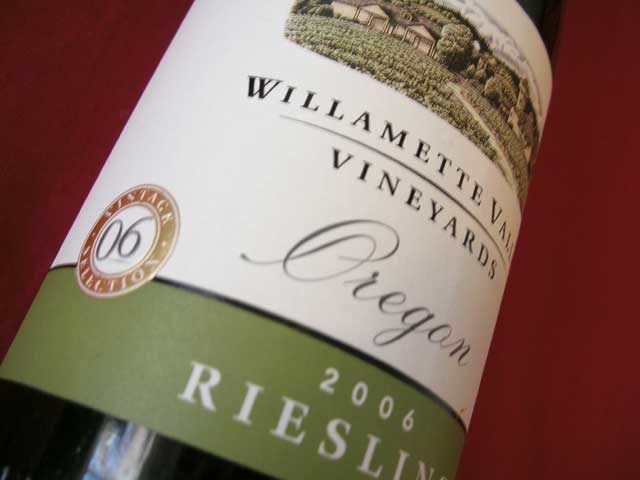 Okay, so you have made it past the teaser and you are now keen to hear the full story. It all started in the early nineties when a friend introduced me to the twin quasars of (alternative) rock, They Might Be Giants. Why this is important, I will tell you later. Skip almost two decades and put me in Harvey Nichols, a luxury department store in London. The top floor features a small yet interesting wine store where I recently found a Riesling from Oregon. Remember, I knew that 'Oregon is bad' (see above and below), but I had also heard good things about wine from the north west of the States, so I decided to give it a go.

Oregon with its cooler climate should be a good place to make light Riesling. As I adore the light and fruity Riesling from the Mosel, finding a new world Riesling with 11.5% alcohol was quite exciting. Where did this one come from? The land that is now Willamette Valey Vineyards was bought in 1983 by Jim Bernau, who had studied wine at UC Davis and in France. Production started in 1989 and the winery is focussing on 'cool-climate varietals, especially Pinot Noir'.

The 2006 vintage selection Riesling is a fairly lightly coloured wine that looks very clean. Actually, not only the colour has a touch of lightness - colour, bouquet and taste, it is all quite airy, light and clean. The nose, for instance, features apple and citrus fruit acidity with some pear, but it also has floral aromas and especially honeysuckle and elderflower; in terms of pear imagine it as caramelised in sugar and marinated in alcohol, but again in a subtle way. There is something else in the nose which I cannot describe in any other way than to say that it smells brownish. And there is a well loved (by some; hated by others) typical Riesling aroma, something between paint thinner and varnish, just the faintest hint of an aroma that over the years may become a little more like petroleum. Overall, the nose reminds me a little of the last few dry Muscats I had - it is just that light, airy elderflower aroma. More on the subtle side but not bad.

On the tongue the wine is light too and certainly more on the sweeter side; add some star fruit to the mix - when the wine warms up it reminds me of a type of fruit gum I liked as a child, particularly the passion fruit. At moments, especially the warmed-up moments, drinking this wine is a little bit like drinking a very smooth grape juice to which flavours and some water have been added. This certainly makes the Oregon Riesling very quaffable, but during these (very few) juicy-watery moments it also made me hope for a bit more depth. The finish is on the medium side. 'The stylistic vision of this wine is that of the Germanic Rieslings.', the wine fact sheet tells us about the Willamette Riesling.

Unfortunately, I missed a chance for a blind tasting against a German Riesling. So it is a good thing that I have drunk quite a few of those over the last few years to make some comparisons. First of all let me come to the all-important question: Do I think it is better or worse than a German Riesling? Put like that it would be a stupid question as there are both horrible and outstanding wines being made in Germany, and of very different styles too. So let's be more specific. In terms of style, I would compare it to a Riesling Kabinett from the Mosel: light, fruity, some acidity and a good dosage of off-dryness. The Oregonian does not have enough oomph to remind me of a Spätlese (late harvest) and it also features less mineral than I would (on average) find in a German Riesling. Had I come about this wine without any German Riesling context, I would certainly have enjoyed it, as it is very quaffable. With my background and also with the information from the fact sheet in mind I cannot but think that I could name quite a few German Rieslings that are cheaper and have just that tiny bit more elegance and depth. However, this is from the perspective of someone who buys almost all his German wine directly in Germany, which makes it quite a bit cheaper. If you are based in the US, especially on the west coast, the situation may be different price wise.

While I am not completely blown away, this experience was interesting enough for me to keep an eye on Oregon and the Willamette Valley Vineyards - I think we have a good candidate for a future blind tasting, and who knows what the outcome would be? So maybe we have to give the last word on this to an American, to make sure there is no national bias here. Let's ask John Linnell, one of the two Johns of They Might Be Giants. A few years ago he recorded an album entitled 'State Songs', and one of the songs, the one quoted above, is about Oregon. Listen to it below, at about 06:23. Enjoy!