Bavaria, home of the BMW, the original Disney castle and German red wine. Oh, wait, did I say 'German red wine'? Obviously, I should have said 'German beer' or something along those lines. However, I am just now looking at a bottle coming from Bavaria that features no lion or young maiden on the label; instead, it has a red screw cap and says 'Spätburgunder' (Pinot Noir) and 'unfiltriert' (unfiltered). And it looks, smells and tastes like a red wine. More importantly, it looks, smells and tastes like a good red wine. So while I am not telling you to forget about Bavarian lager, you may want to keep an eye out for red wine from the Bavarian wine growing region of Franken (Franconia). 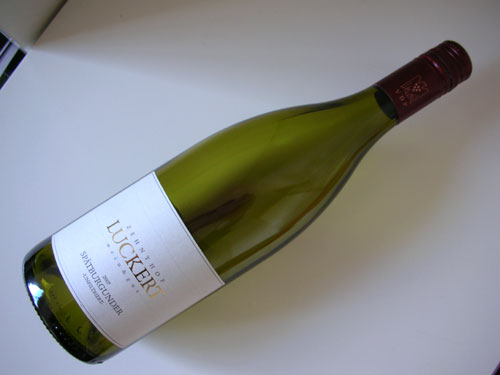 Franken is mostly famous for its Silvaner, but they do actually grow a wide range of grape varieties there - and so does the Luckert family: Silvaner, Riesling, Pinot Noir, Pinot Blanc, Chardonnay, Merlot, Domina, Bacchus - and even the often boring Müller-Thurgau. Sadly, they do not make much Pinot Noir, but I managed to get hold of two bottles - the more basic one, which I am reporting about today, and a three star heavyweight that will be reviewed at some point.

So, here we are - my first Bavarian red wine (sincere apologies to any Bavarian red wine I may have forgotten). The wine merchant I sourced this from tells me it has less than 2g of residual sugar, was grown on shell limestone and matured in large wooden barrels. You don't care too much either? Well, then let's have a sip.

The colour is a darker red, noticeably more intense than most of the lighter German Pinots I usually drink. The same goes for the aromas: a robust nose of leather, cocoa, cherries and woodland herbs, all with noticeably earthy undertones. The Spätburgunder also shows noticeable muscle on the tongue; it is by no means a heavy wine, but more robust than you might expect from a German Pinot. Noticeably dry with good tannins, the Luckert also has a good medium finish that again shows off those coffee/cocoa aromas.

The wine was noticeably better on the second day and still quite sharp and tasty after four days, so I would suggest to decant it or to give it a few more years. Looking back at our recent Germany-vs-Burgundy Pinot tasting, the Luckert is actually closer to the Burgundian wine.

This is a good, serious wine that demonstrates that a) Franconia has the potential to produce good reds and that b) the Luckert family know how to do it.

I love the utter strangeness of the concept of "bavarian red wine" - must be deeply puzzling to the Munich crowd, who are on a strict diet of italian reds, and also somewhat insulting to Franconians, maybe, who to this day have not entirely gotten over being annexed into Bavaria 200 years ago - it seems you've put your finger on something there. Must get our friend Conny to comment...

In reply to Bavarian red wine by Julian

The Franconians may not like it, but while I am positive that most foreigners will have heard of Bavaria, I am not so sure if the know where (or what) Franconia is. Wine snobs might be aware of Franconian Silvaner, but even that is not something you would find in British wine stores. So I figured our international readers would find it easier to get to terms with Bavaria. I wonder if the wine Franconians do now grumble...