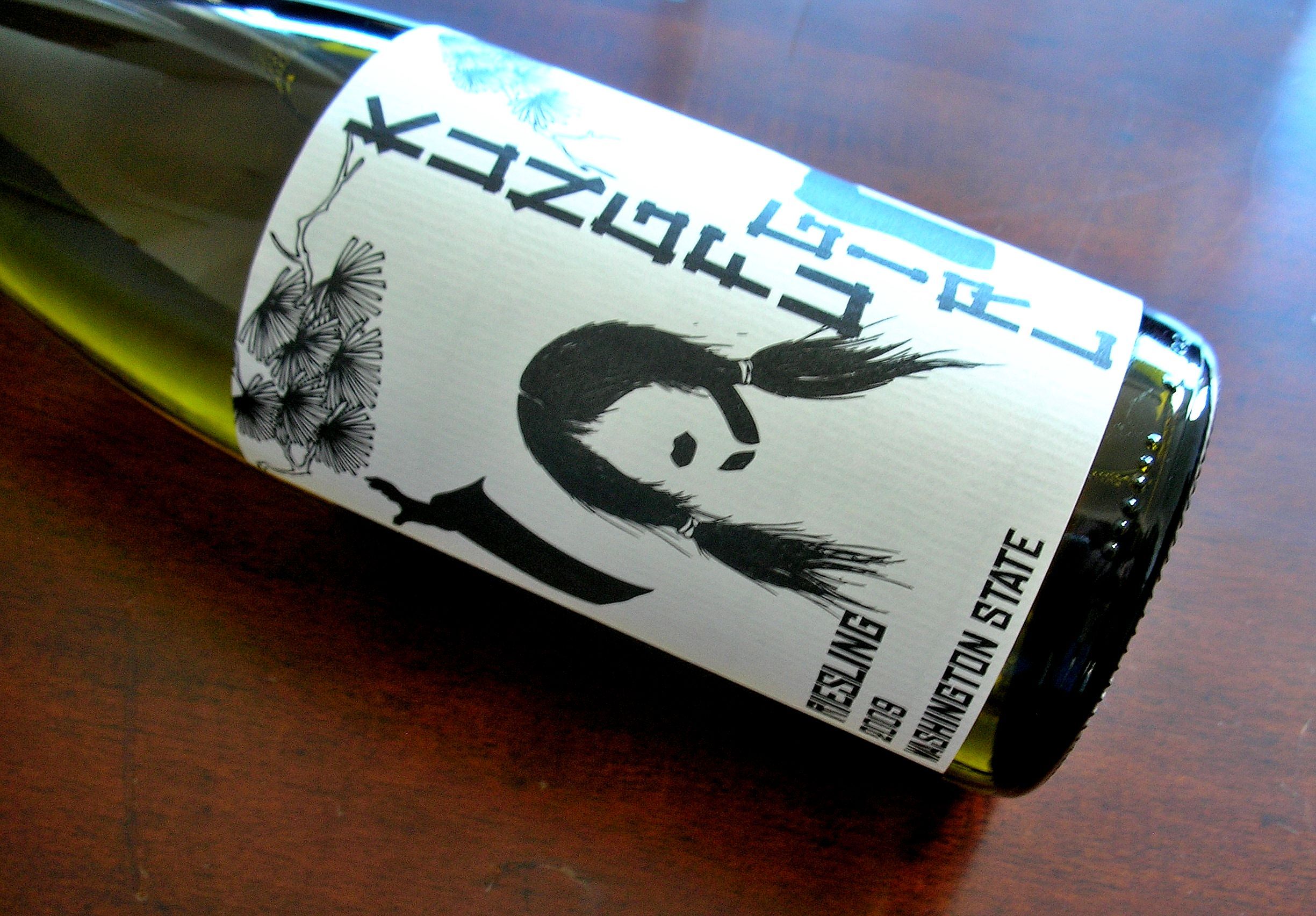 He is widely known for making wines the way he believes they should be made (which can include calling Europeans 'pussies', in a friendly way, of course, for being scared of wines with more than 15% alcohol) and for an equally distinct approach if it comes to marketing and labels, as you can clearly see above. Oh, and Smith was recently crowned Food & Wine Magazine’s Winemaker of the Year 2009.

The Kung Fu Girl Riesling comes from the Evergreen vineyard, in Washington State's Columbia Valley. According to the website, it is 'a cooler site due to river influence, the soils are composed of clay, silt, and caliche, deposited during ice age floods. This site produces fruit with sublime mineral character and the acid balance that winemakers dream of.' So, an American single vineyard, dry Riesling - what is it like?

The colour is a pale lemon with a green tinge; not unpleasant, but hardly substantial. The nose is crisp, dominated by lime in different variations, including candy lime, and under-ripe green apple. Add a hint of pear and a little mineral.

On the tongue it is lime all over again. Lots of limey acidity gives the wine sharpness, especially in the finish, and a bit of edge. Mid-palate though it all falls a bit flat, more like a processed soda or soft drink. I have enjoyed wines with more acidity than the Kung Fu Girl, but me and my drinking companion still felt it was too much, or rather that it could have been better integrated. Having the wine with food made it better, but even so the acidity dominated the experience.

Now, if you consider the price and the audience it is marketed at I am sure many people would find it very drinkable - as Twitter seems to confirm. If the idea of drinking sprite with alcohol and Riesling acidity appeals to you (and there is nothing wrong with it) you may like this wine. We did not finish it, not because it was bad, but we could also not see much reason why we should.

Interestingly, the night before we had tasted a fantastic Mosel Riesling with really well integrated acidity and great minerality, which we loved to bits. So I leave you with what Charles Smith has to say about the 2009 Kung Fu Riesling (btw, I think it is great that he gives detailed notes on all his wines on the website):

2009 was a nearly perfect vintage in Eastern Washington. The grapes were picked in late October after a season of very long, steady, slow ripening. A very long, cold fermentation helped to bring out the maximum in true varietal character, similar to a classic "Mosel-style" Riesling. Both fermentation and aging occurred in 100% stainless steel. This vintage shows the true character and potential of this amazing vineyard. This girl truly rocks with a mineral edge, yet delivers killer fruit character expected from an awesome Riesling. Worth twice the price and from a single vineyard—perfectly 'Modernist Project.'

Never had a chance to try those Charles Smith wines. But I've seen the Gary V episode back then... http://tv.winelibrary.com/2008/10/01/a-very-cool-winemaker-visits-the-t…

Thanks for that. Jenny and I tried this wine, along with their Viognier, at a tasting in Basel about a month ago. Pleasant enough, although our verdict was ultimately quite similar to yours. I'm sure they'll sell like hot cakes. Great branding.

Thank you both for your

Thank you both for your comments, Alex and Simon. Maybe the wine just had a bad hair day (I wonder how Mr Smith looks like on such a day), or maybe the Mosel Riesling we had on the day before was just too good in comparison. I have to admit I had expected a little bit more. Great branding though, no doubt!

In reply to Thank you both for your by torsten

Mr. Smith probably has a bad

I agree with you sentiments. It's very telling that you did not finish the bottle.

In a way it reminded me of the American takes on British beer styles such as IPA - initially impressive but you don't really want another one.

It's a shame because Americans can make elegant wines, you just have to hunt them out.

In reply to brash by Henry Jeffreys

Americans can definitely make elegant wines; so far I have been most successful with Pinot Noir and Chardonnay, but there is also Riesling potential in the US, even though I have personally only touched upon it.

To be fair to the Kung Fu Girl Riesling though I should add that I recently had it as part of a massive Riesling blindtasting where it did a little better. However, this is one of the wines where I do enjoy the first sip or two, but after a while I lose interest. We may still have finished it on the day, but we did not have it with food and there were more exciting wines to look forward to.

I am still impressed by the successful brand. The style of wine is not so much for me though. Interesting to hear that your experience was similar, Henry!

In reply to Re: brash by torsten

By Far the best wine ever

My Girlfriends and I discovered this wine in Canmore on a stagette at the greatest wine shop we started drinking it two years ago and it has become a tradition. Every friday night is kung fu night now we love it sometimes we have one bottle and other times we have a few this is our favorite and we will continue to drink it every friday night.

In reply to By Far the best wine ever by Crystal

Happy to hear you and your

Happy to hear you and your girlfriends enjoy the Kung Fu Girl Riesling! Sharing wine with friends makes it always better, I find, and wine traditions can also be great. Shame it did not rock my boat as much as yours. Enjoy!

In reply to Happy to hear you and your by torsten

I too came across this wine while on vacation in the mountains, and had several bottles with the picnic lunch we carried on our bikes this past June. It was very refreshing cooled in the cold mountain water stream we were next to, and my wife and I both enjoyed it with the roasted chicken and wild mushroom sandwiches. I might add that a really nice riesling from Washington State is Eroica from Chateau Ste Michelle. We would have brought this wine, but did not want to risk it going bad in a backpack.

In reply to Kung Fu Girl riesling by Dick

Thanks for your comment and this enticing story, Dick, even though it is likely to arouse intense envy: It seems you have found a way of enjoying white wine that cannot be bettered.